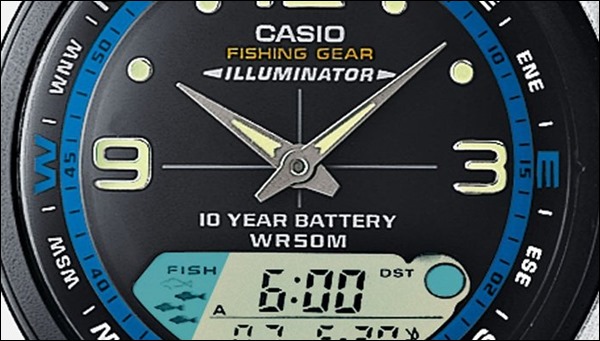 Found another ana-digi, and wow is this one good. Next to the Casio G-SHOCK DW5600E, this just might be the ultimate bang-for-your-buck tool watch.

Every now and then I check out watches online. Casio is one of my favorite brands, and while I was looking at different models, I came across the Casio AW-82.

How I came across it is interesting because I wasn't looking for it. Rather, it appeared as one of those "since you just viewed X watch, you might be interested in Y watch" things on Amazon.

As it turns out, the AV-82 is European market only and has absolutely no presence in the US at all. You won't find this one in any store in America, and it's not even listed on the casio.com web site (but is on the Casio UK web site.)

The AV-82 comes in six flavors. All of them have a silver plastic case. What changes are the colors and strap it comes with. 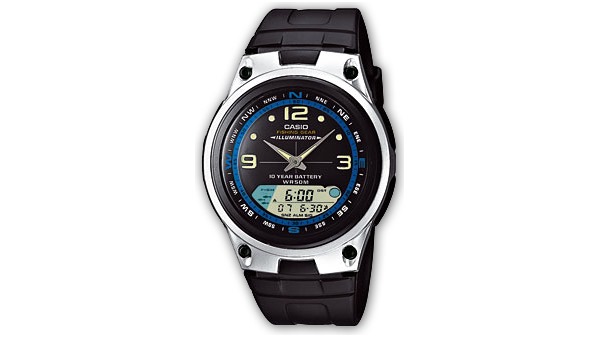 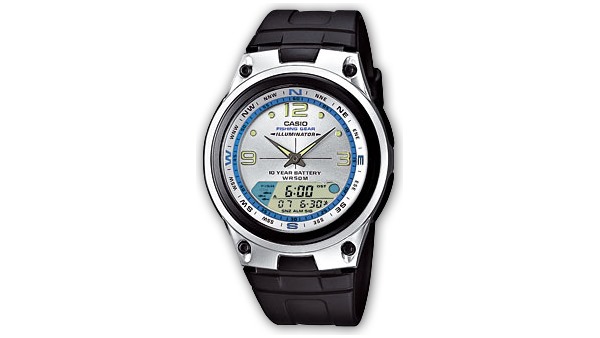 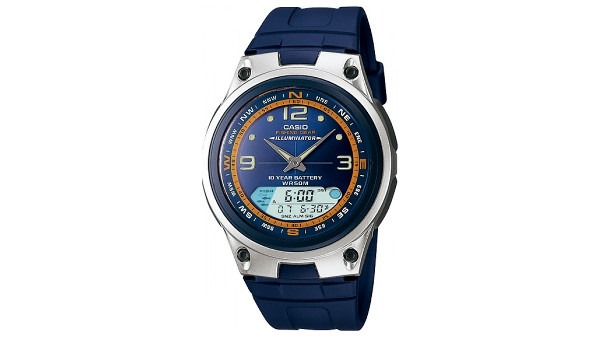 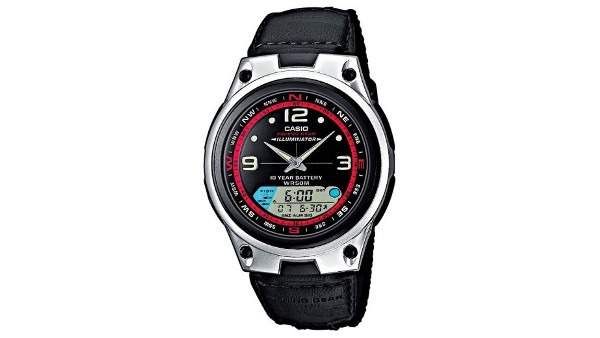 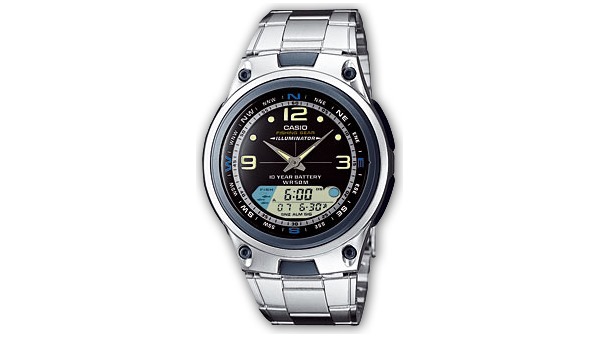 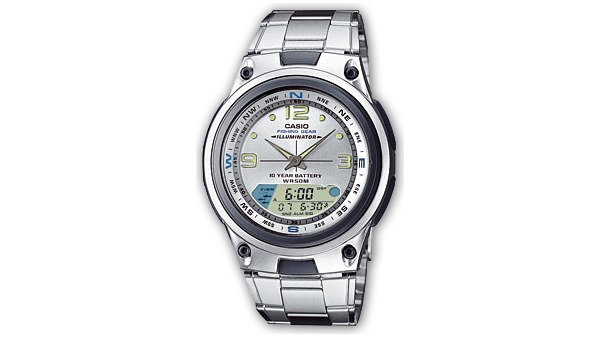 The toughest one to find is the AW-82B (the red one.) There's usually no listings for it on the US Amazon site, so the best bet is to try eBay instead (and the price will be high for it as it's a rare model.) The AW-82B has some definite uniqueness to it as it's the only one of the lot to have its own unique color and a canvas strap with "FISHING GEAR" imprinted on it.

Which model would I go for personally? Not the red one. True, it's a collectible, but it doesn't look as good as the one I would get, the AW-82D-1AVES (black dial with metal bracelet.) It's readily available, priced nice for what it is, and it could very well be the ultimate tool watch.

What makes the AW-82 (any model) possibly the ultimate tool watch?

On the surface, the AW-82 look like a plain analog-digital watch. But once you dig in, you find it's loaded with goodies.

10-year battery. Nice to have.

LED night light. Illuminates the analog face. Has configurable afterglow of 1.5 seconds or 3.

Has lume on the hands that actually works. Very cool.

Auto calendar. Programmed up to year 2099. This means it knows all the leap years so the calendar is never wrong.

Moon phase indicator. This is shown via the little blue circle at the right side of the digital display.

Fishing timer. This is where things get interesting. This is, technically, a Casio "Outgear" model. At the left of the digital display are little images of fish: 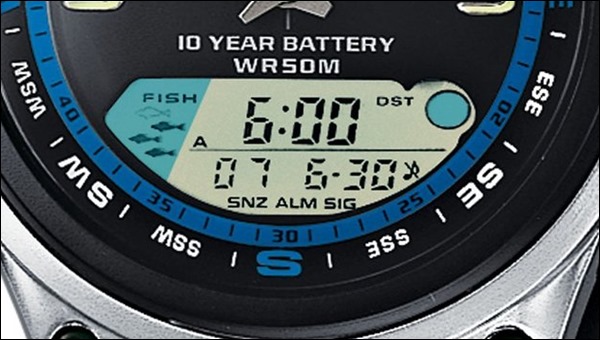 Does this feature actually work? In fact, yes it does, if you set up the watch correctly.

If you input the correct longitude and latitude data for where you live, the fishing timer is said to be pretty darned accurate from what reviews I've read by owners of this timepiece. And even if you don't fish, who cares? It's just a cool feature.

While true the manual does have presets for cities around the world, for best accuracy, you enter in the coordinates yourself manually for where you live. To find that info, you just go to any mapping web site that displays coordinate data on the map and get it from there.

For example, in the manual, the closest preset I could choose is Miami. But I don't live in Miami. I live in Tampa Bay where the coordinates are obviously different. Miami has a latitude/longitude of 25.7N 80.1W. Tampa has a latitude/longitude of 27.9N 82.4W. Since the Casio AW-82 doesn't do coordinate decimals, I would just round it to 28N 82W. That data allows the watch to calculate the appropriate time to fish. As for how it does those calculations, I've no idea. But it's supposed to work pretty great.

There are 4 fish total on the digital display. Supposedly, if all 4 fish are showing and all are filled-in (meaning not outlined,) that is the ideal time to fish.

I really have no idea how well or not well the fishing timer works other than the reviews I've read on it. But again, those who actually understand how to program the lat/long coordinates correctly do say it really works.

Dual time. The analog clock can display the home time and the digital display can display a different time or vice versa. Or you can have both display the same time. Your choice.

Stopwatch. Nothing you haven't seen before.

3 multi-alarms with snooze feature. Each alarm can be configured in 1 of 4 different ways. Daily alarm, date alarm (sounds at specific date of the year, such as someone's birthday,) monthly alarm or an alarm that sounds on every day of a particular month.

Button tones on/off toggle. I own a couple of Casio digitals that do this. Nice to have if you don't want to hear beeps when going through menus.

Safety catch (metal bracelet only.) This is the style of metal bracelet where you press two sides to release it, and serves two purposes. First, to prevent the clasp from wearing out too quickly and second, to prevent it from accidentally being knocked open.

I own a Casio AE1200 which I thought had all the possible goodies you could get in a Casio timepiece for under 50 bucks.

The AW-82, while more expensive, puts up a very good argument against the AE1200. Both timepieces are absolutely chock full of features, both have 10-year batteries, both have several different models and colors to choose from.

I think in the end it all comes down to style. The AW-82 has a more upscale look while the AE1200 has a more military look to it.

I will say that when it comes to price, you simply can't beat an AE1200. On the link for that model above you'll see an offering that at the time I write this sells for just 15 bucks. That is so cheap considering how just plain good the AE1200 is.

If you know watches, you know 13.5mm is a bit chunky. However, the crystal of the AW-82 is domed, and the CR2025 battery it uses is bigger which allows the watch to run for 10 years before the charge wears down.

Is there any ana-digi that has as many features as the AW-82?

Answer: No. You can't do any better for for the price. Your only cheaper choices with similar feature sets are all-digital models, also from Casio. Namely, the AE1200 mentioned above and the AE1000 (also just 15 bucks.)

On a final note, I did mention the DW5600E at top, a G-SHOCK model. I consider that the ultimate tool watch simply for the fact the case is ridiculously over-engineered and will withstand any punishment you throw at it. There is no other watch where I could say, "Yeah, take it in the ocean and swim with it. No problem." If you want the ultimate bang-for-buck, the DW5600 is it. Or, if you want something with the same style and ruggedness with atomic timekeeping, that's the GWM5610 model. Twice the price, but has a lot more features (solar powered, time zones, auto-EL, auto-timekeeping, etc.) Not the most stylish thing, but totally rugged and a great tool watch.