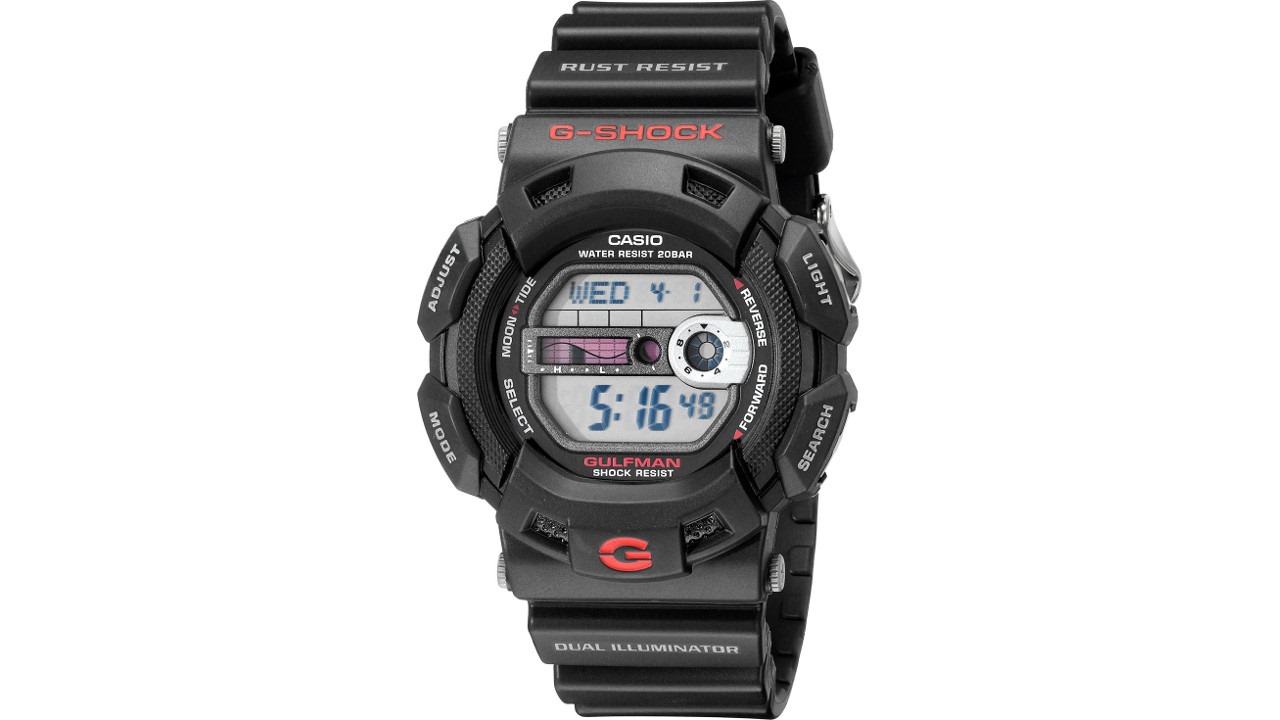 This was a disappointment.

As I said before, the G-SHOCK watch I wanted to get was the G9100 Gulfman, so I bought it.

This is the story of what happened.

The DW-9052 is fantastic. Truly. It's the right size, right weight, right everything. My only real complaint about it is that it only has a single alarm. I wanted multiple alarms (at least 3), which is why I wanted the G9100 in the first place.

Now on to the Mudman.

I never bought this one because I am not a fan of the styling. But it just so happened I saw this model in person and decided to try it on. While I had no intention of buying it, I just wanted to see what it felt like. It felt fine, but wow, what a small display. This is a watch that is "all case". Yeah, it's readable, but for a watch that measures 52mm lug-to-lug, 46.3mm across and has a 16.3mm thickness, the smallness of the display got me worried.

Why did I get worried? Because the Gulfman is 51mm lug-to-lug, 46mm across and 16.4mm thick. It's smaller than the Mudman.

Even though I was worried that the Gulfman would have the same smallness issue that the Mudman did, I bought it anyway.

The watch arrived in the mail, and there were two problems with it.

First, the beeping on alarm or countdown timer sounded wrong, and I know exactly why. Even though the watch was brand new, the battery in it was old. It was probably a model that had been sitting in storage for God knows how long. That was enough to prompt me to return the watch, which I did. I wasn't about to take apart a brand new G-SHOCK to replace a battery that should have been new or at least recent.

I'm actually glad the beeping was irregular, because the second problem was just maddening.

The watch was both too big and too small at the same time.

This is the weirdest issue I've ever had with a wristwatch, so I'll do my best to explain.

The G9100 is physically larger yet has a display that is smaller than the DW-9052.

On my wrist, which measures 6.75" at its thickest point, the lugs of the G9100 have slight overhang. I expected this because I know a lug-to-lug of 50mm is pretty much the absolute limit as to what I can wear on the wrist, but figured a little overhang from 51mm wouldn't be too bad.

Imagine my surprise and disappointment when I put on the G9100, see the slight overhang from it being slightly too large yet having a display that makes it look too small at the same time.

The DW-9052 even though physically smaller wears larger, as in normally. The G9100 Gulfman, while physically larger, wears smaller. It's just a very odd-fitting timepiece.

Aside from the really weird sizing issue, here's my take on the features of the G9100 and whether they're actually usable or not.

In order to set up the watch to accurately report the tide, inputting the proper longitude and lunitidal interval is required.

I live in the Tampa / St. Petersburg / Clearwater area of Florida, otherwise simply known as Tampa Bay Florida. The gulf near me is the Gulf of Mexico.

The manual does list the settings to use for most areas. But for Florida, it only lists Miami. That's worthless to me since I live in Tampa Bay which is clear across the other side of the state. This means I had to manually figure out the longitude and lunitidal interval figures myself.

Figuring out the longitude wasn't that hard because that information is accessible via Google Maps.

But even after inputting the proper settings, the information the watch gives is just so-so at best.

I honestly believe one would be better off with a traditional tide clock.

Totally worthless on the G9100 for one reason. You can hardly read it. The tide graph can be read just fine, but the moon phase is itty-bitty and sunken down to the point where it's almost illegible.

Big, easy to press, and designed in a way that they don't get pressed accidentally. This is one of the good things about the G9100.

Fairly easy-to-read, but when you want a legible display, a G-SHOCK is not the best choice. In all honesty, the super-cheap F-91W is still one of the easiest-to-read watches that exists. Yes, it's small, but the display is designed perfectly. Buy yourself one and you'll understand why.

The stopwatch does have a 5 second pre-count that you can enable that counts down 5 seconds before the stopwatch starts. The first 2 seconds are silent and the final 3 have ready-set-go beeps.

The countdown timer does have auto-repeat and progress beeper functions. Nice to have but not necessarily useful.

The alarms are nothing special. They work. Mine would have worked better if the battery was fresh.

The time zone feature that can display one of 29 different zones (from 48 cities) is a take-it-or-leave-it feature. It's not much better than a dual time feature. In fact, it pretty much acts the same.

The G9100 Gulfman gets more things wrong than it gets right, and I don't recommend this one.

I suggest these alternatives.

Gulfmaster. Large and in charge, but arguably the best thing to wear on your wrist when on the water.

WS210H. This has measurements of 45.4 x 44 x 13.3mm. Midsize for a digital, but still easier to read than the Gulfman. Also, a nice bonus: Does not require the lunitidal interval to have the tide graph work. All it needs is the time of the first high tide of the day and it will calculate the interval from that.

I can pretty much guarantee you will like any model above better than the G9100.

Yeah, I know I'm really coming down hard on the G9100, but compared to other models Casio has that are so much better, it's puzzling why the G9100 still even exists.