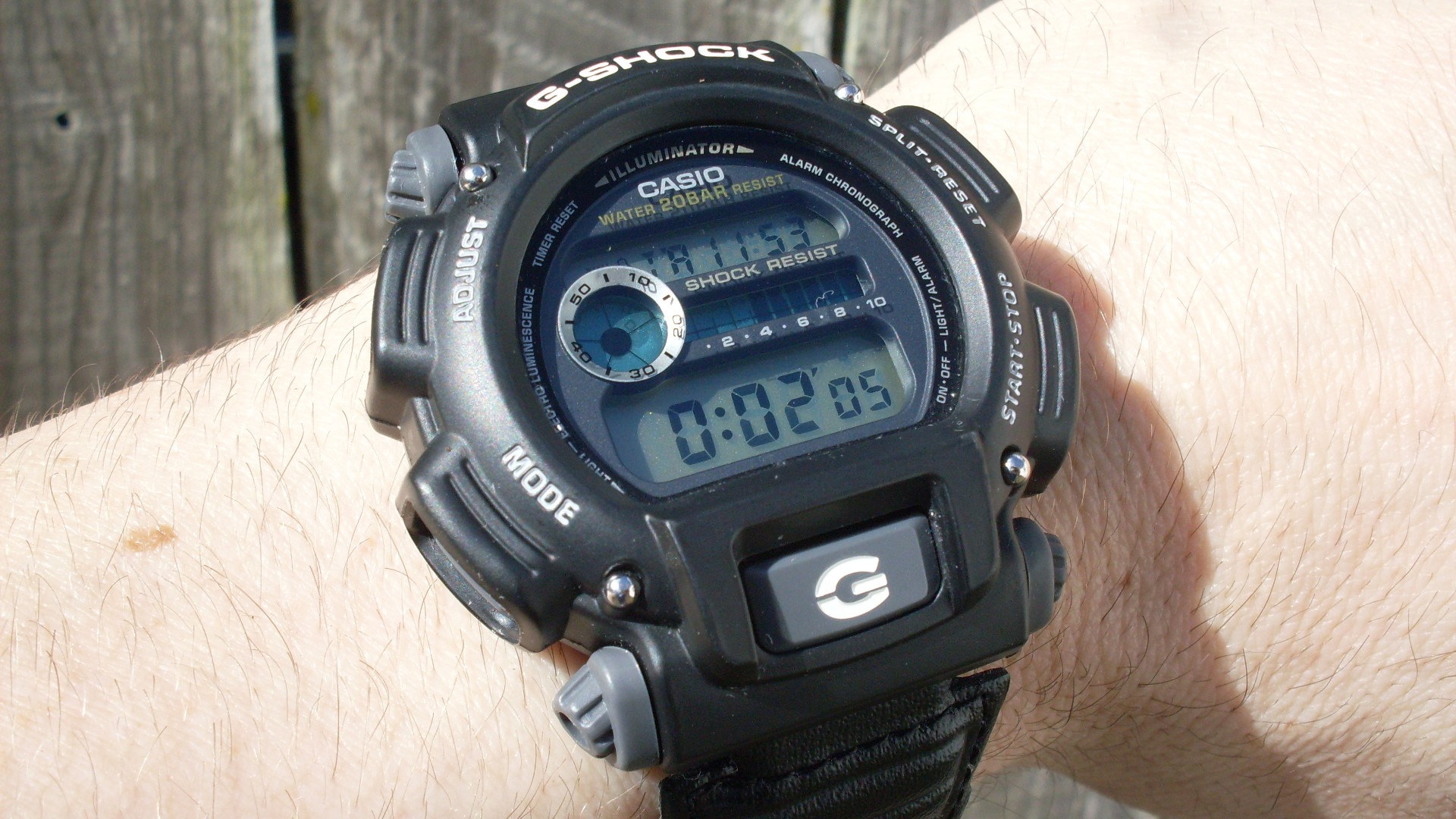 Is it good? Let's find out.

Before I get into what features this watch has, let's talk about size first.

Is this a goofy-big watch?

I was really worried that this watch was going to be too big for my wrist and look stupid. Fortunately, it's a size that fits my 6.75-inch (17cm) wrist well.

I can say confidently that this is not a goofy-big watch. This is a smaller men's G-SHOCK. If you're a member of The-Under-7-Inch-Wrist Club, this watch should fit you just fine.

Good, but not great.

The LCD "likes" being in well-lit environments as it seems to show the best contrast under those conditions.

In places where the light is a bit less, the contrast "washes" a bit. It's not horrible, but it is noticeable.

If a G-SHOCK model with a better contrast LCD is your thing, I'd suggest looking at models DW5600E, GWM5610 and GWM500A.

The backlight on the DW-9052 is good. The light itself has just the right amount of illumination, and the big front-mounted G button in front of the case to activate it is as easy as it gets.

It is true that a Super Illuminator LED system does use less power, resulting in a longer life battery, but the older Illuminator is much easier on the eyes.

Typical to most G-SHOCK watches, the buttons don't protrude from the case to offer better protection. Fortunately, the DW-9052 buttons are big and easy to get to.

More often than not I angle my thumb and use my fingernail to push a side button. Yes, this does mean I have to shift hand position when going from one side of the case to the other, but it's not a bother.

In addition to telling time and date, the DW-9052 has one daily alarm, a countdown timer with auto-repeat and a stopwatch. It also has the ability to flash the display when an alarm sounds or a countdown timer ends.

Numbers are only able to be set in forward direction and not reverse. For example, if setting the time to 10:30 and you accidentally skip past 30 to 31, you have to scroll the numbers all the way to 59, back to 0 and then to 30 again.

Button beeps cannot be muted on the DW-9052.

My kitchen scale weighed it at 57 grams.

Do I consider the DW-9052 heavy? No. It is solidly in the middleweight range.

A featherweight is something like the F-91W, which weighs 21g.

A heavyweight is pretty much any men's stainless steel watch with a steel bracelet. The weight range is usually between 90g to 120g for those.

Overall appearance, and other 9052 models 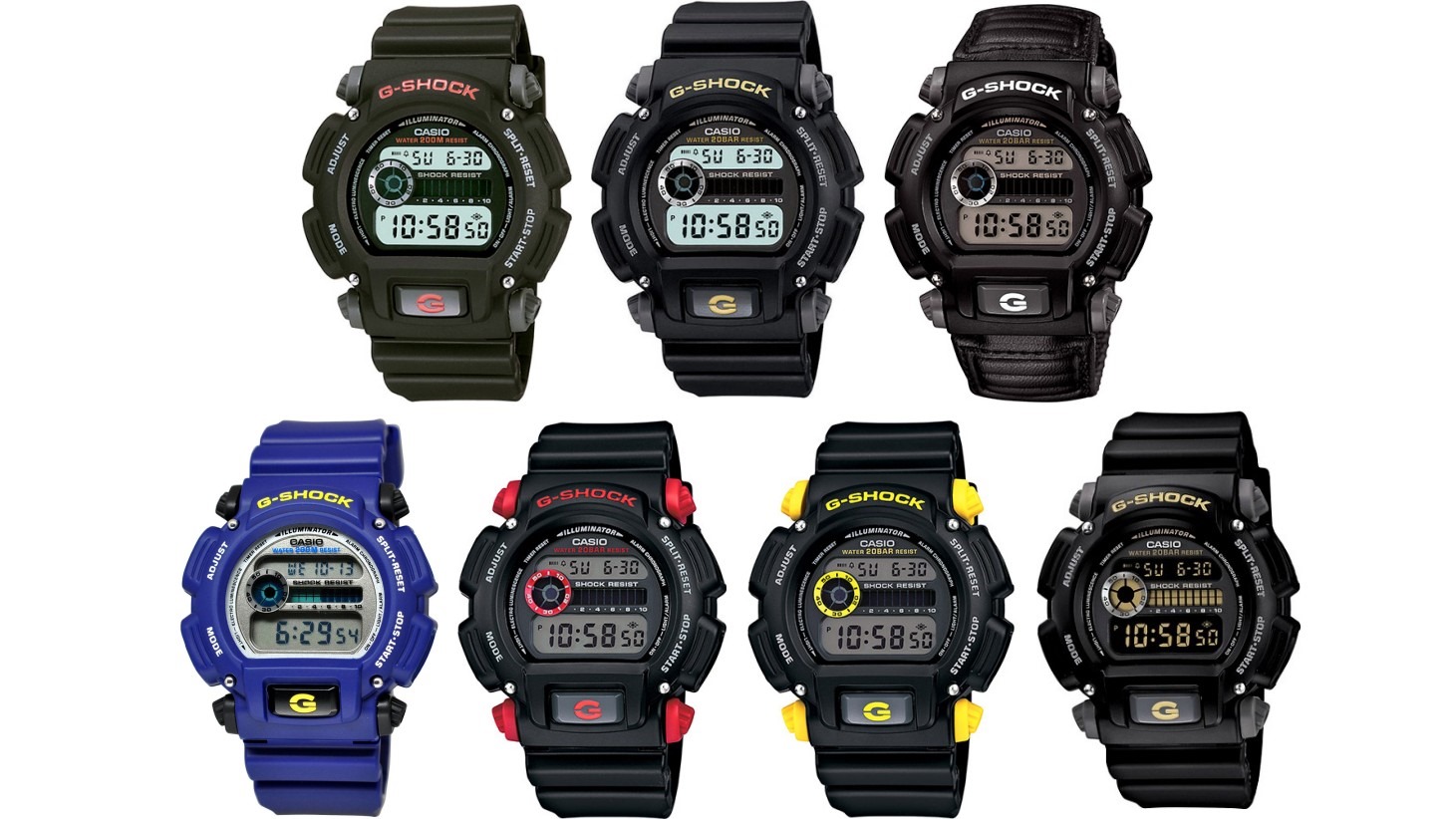 The DW-9052V model I bought has the best overall look to my eyes. It is the only one one that has white G-SHOCK text and white G button text. The other models either have red, gold or yellow text on the case.

Seen above are what I think are all the models available.

Does this mean the model is dated? No. The auto calendar feature is pre-programmed all the way to year 2099. This means the watch knows when there are leap years, so every 4 years when a February 29 comes around, the calendar will display the correct date.

This is a video I made explaining how to set time, alarm and everything else on the DW-9052:

This is a watch that can truly handle life

I bought mine used for just 29 bucks. And that was 29 bucks well spent.