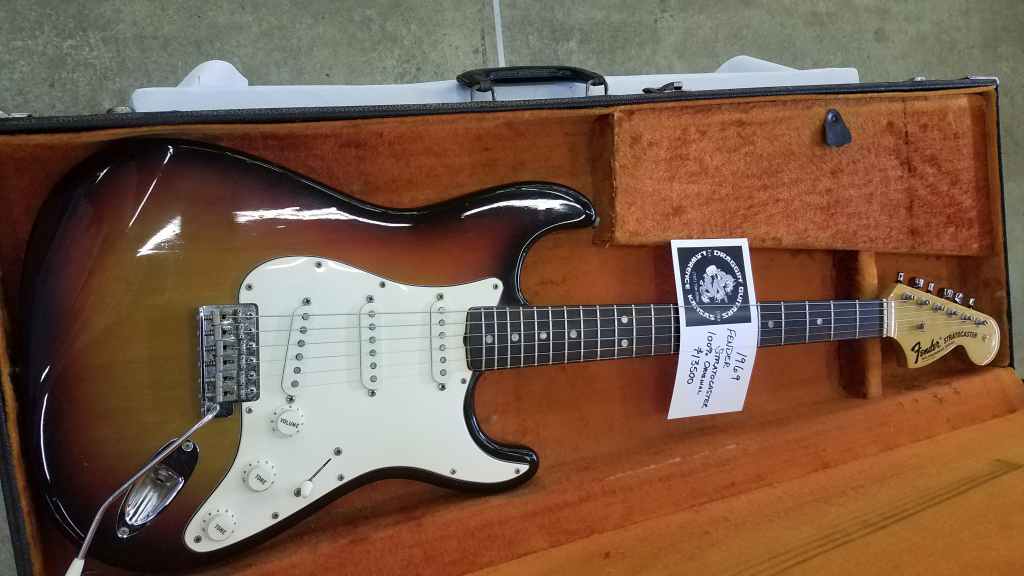 This will explain to you why some guys really don't like CBS era Fender electric guitars.

Firstly I should note that yes, you can absolutely get lacquer finished "made like they used to make them" guitars from Fender today, and easily. All you have to do is buy any Fender American Original series model, and you get the sound, the lacquer finish, all of it.

What I'm specifically talking about here are the older guitars when Fender was CBS owned and they decided to stop using a nitro top coat. More on that in a moment.

I attended the Dallas International Guitar Festival this year. While there I of course saw a whole bunch of vintage electrics. However, what I was particularly looking for were Fender Stratocaster guitars made from 1968 to 1970. I found 4 of them, and the photo above was the nicest example at the show, a 100% original 1969 Fender Stratocaster with cloth coated wiring (which is the more desirable compared to wiring without cloth). Price: $13,500.

Did I have any intention of buying? No. But I wanted to see it anyway mainly for two reasons. Look and feel. I really wanted to get up close and personal with one of these, and did.

It's generally agreed upon that Fender stopped using nitrocellulose lacquer as a top coat in the late '60s. What year exactly? I could not find a direct answer, but it's speculated the urethane top coat began in 1967.

A few words about the '69 price tag before continuing. Yes, the price of the '69 I saw is what this guitar sells for these days. It's 53 years old at the time I write this, the example I saw was in near-mint condition, and somebody will buy it (if it hasn't been sold already). In other words, the seller did have it priced at current market value.

Now I'll talk about the feel first, then the look.

The '69, to be brutally honest, feels what I call "industrial cheap". This is a cost-cutter CBS era Strat, and it definitely felt like it. Both the neck and body have a very plastic feel to it.

Only when you actually touch one of these and feel it in the hand do you understand why some guys really dislike CBS era Strats so much. It goes far beyond the look, which I'll talk about next. My recently acquired new Squier Affinity Stratocaster has a better feeling body and neck when compared to actual vintage '69 Fender.

As for the look of the guitar, I'll talk about the neck first and then the body.

The best looking part of the guitar is the headstock, mainly because of the logo treatment. Seeing the thick black font, the STRATOCASTER "swoop", the WITH SYNCHRONIZED TREMOLO underneath and the busy look of what's going on there just oozes with cool.

The second best looking thing is the fingerboard; it's a nice dark wood (when oiled properly which this one was) that really sets off the fretboard inlay markers nicely.

As for the appearance of the back of the neck, totally awful. It's a no-tint clear gloss urethane finish and just looks like cheap discount lumber.

Where the body is concerned, one word describes it best. Dull. The '69 sunburst finish is muted and lifeless, even with the near-mint example I found. This dull look isn't because the guitar is 53 years old; it came from the factory looking this way. It's no wonder the Black and Olympic White finishes look better, because sunburst does no favors for the '69.

Why would anybody buy one of these?

Somebody would buy this for reasons similar to why I bought a plywood bodied 1989 Squier Stratocaster. If you're chasing after a specific something that only a very particular year can bring no matter how bad it is when compared to other years, that's what you get.

The late '60s CBS Strat will never be as valuable as the early '60s or the '50s Strats, and there's no denying that. But that's not going to stop anybody from buying one who really wants it. Maybe somebody who was 15 in the mid-1980s picked up one of these back when they were dirt cheap as his first guitar and now wants another. He'll spend the 5-figure price tag to get one.

Would I ever own one of these personally? No. I could actually get used to the dull appearance and don't mind the plastic-like feel of it. But what I can't get used to is the truss rod adjustment location at the heel (the neck must come off to perform a truss rod adjustment) and the 3-way pickup selector. Fender didn't standardize the 5-way switch until the late 1970s.

Yeah, I could change the 3-way to a 5-way, but as for the neck, the truss rod adjustment location can never be changed. And I'm not about to take the neck off a guitar over half-a-century in age every time I need to make a small adjustment to the bow of the neck.

I now understand better now why some guys can't stand this particular generation of Stratocaster. Guys who know the early '60s Strats would pick up the '69 and have nothing but vitriol for it.

I also understand that for some, the '69 is a dream guitar. Just not mine.