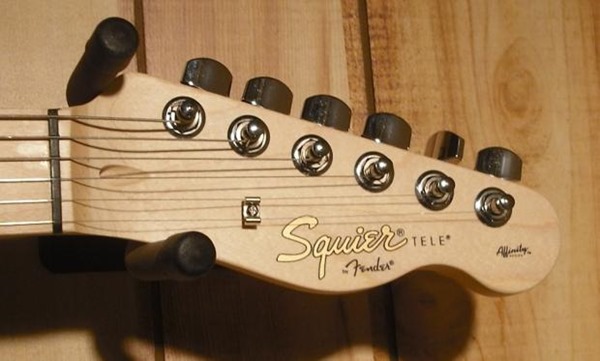 ...it has the updated gold-and-black Squier logo on the headstock.

I've made mention a lot of the Squier Affinity Telecaster. Great guitar, cheap and good. I've played one personally and yes, it's a good Telecaster.

However, the better looking ones have the gold-and-black logo treatment on the headstock.

It took me a while to figure this out, but the only way you're going to know you're getting this better-looking logo is if the guitar was made in 2013 or later.

Unfortunately, it's the case right now where pretty much all the guitar vendors are still using the stock guitar photo for this particular guitar, which is old and shows the old plain black logo.

Being that guitar vendors usually won't bother on a request to send you a recent photo before purchase, your only option is to ask for the serial number and hope they even know what it is.

I do plan on getting an Affinity Telecaster either this year or next year, and I want that black-and-gold logo. I've seen it in person and like it much better than the older plain black logo treatment.

Yes, the guitar is exactly the same no matter what logo is on that pegboard, but what can I say, I like that gold-and-black logo better.  🙂