Cheapest vs. most expensive Squier Telecaster 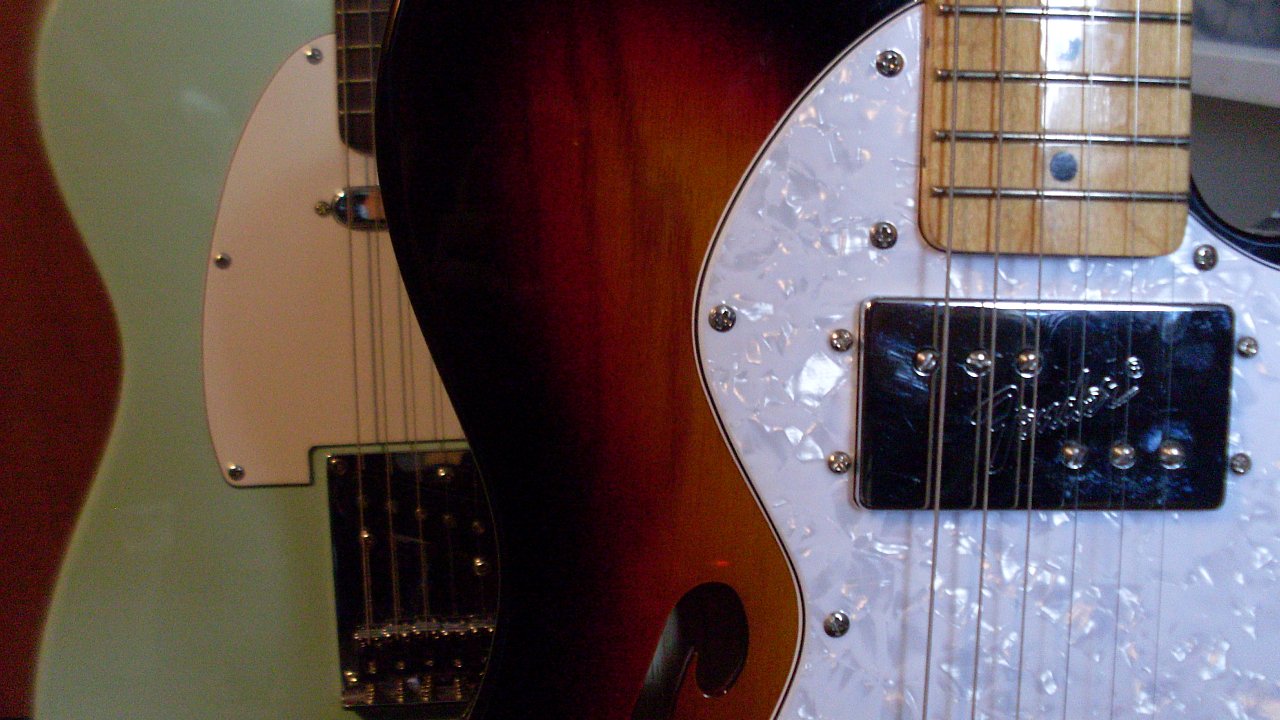 Is one truly better than the other? Let's find out.

Unintentionally, I bought the cheapest and the most expensive Squier Telecasters currently offered at the time I write this. The Squier FSR Bullet Telecaster and the Squier Vintage Modified '72 Telecaster Thinline.

How was this unintentional? Because I wasn't thinking about price at the time I bought these guitars. Both just happened to be what I wanted.

Did I buy both at once? No. The Bullet was first, then I picked up the Thinline some time later.

Did I buy both at full retail price? Absolutely not. I got the Bullet on an introductory discount, and through a goof in the computer system at the guitar store, got the Thinline for 33% less than what it ordinarily sells for.

However, were you to buy either of these at full retail price, the Bullet will either run you (in US dollars) $179, and the Thinline $449.

Each guitar has its own unique sound. The Bullet has trebly single-coil pickups and has more traditional Telecaster tone, while the Thinline with its semi-hollow body and "Wide Range" humbucker pickups has a different tonal character best described as "sounds like a Thinline."

Where the real differences are between the guitars are not so much in sound but in other areas.

Bullet has a non-tinted maple neck with satin urethane finish on the back and rosewood fingerboard. The fingerboard is open grain like most other guitars with this material.

Thinline has a tinted 1-piece maple neck with gloss urethane finish on both front and back.

Bullet has a basswood solid body with single-color paint and is urethane sealed.

Thinline has an ash semi-hollow body with 3TSB (3-tone-sunburst) paint and is urethane sealed.

Same style electronics between both guitars, but the Bullet has a traditional horizontal control plate while the Thinline doesn't where it's "leaned," mounted in the pick guard and angled towards the player.

Thinline has a Thinline-specific guard which is pearloid color 3-ply pearloid/black/white.

Bullet has a "modern traditional" Telecaster bridge. Flat plate without raised edges and it also houses the rear pickup.

Thinline has a smaller bridge that does not house the rear pickup and is Thinline-specific.

Both guitars are string-thru style with ferrules in the back of the body.

Both guitars have the "cup" style Telecaster output jack, which is a recessed style and not the flush type seen on other guitars such as the Les Paul.

Thinline is lighter than Bullet. I'm not exactly sure by how much, but it's definitely noticeable.

What you pay extra for with the Thinline is...

The Squier Thinline is literally the only licensed-by-Fender Telecaster Thinline guitar available for under $500 at the time I write this. The next available guitar is the Fender version which is much more expensive.

Bullet is a traditional modern Telecaster. It's a very familiar design and not all that different from the Fender Standard Telecaster.

Thinline is the cost-effective version of the Fender Thinline, and I argue it's actually better than the Fender because there are several things about it that are more agreeable. Namely, 4-bolt neck plate instead of 3, flatter fingerboard, more comfortable C shape neck, "barrel" switch tip instead of "top hat," and so on. The Fender guitar is intended to be a copy of the 1972 Thinline it's modeled after while the Squier is more modernized and the better player's guitar as far as I'm concerned.

What you pay less for with the Bullet is...

...cost cutting here and there but still getting a great guitar.

Bullet's biggest strengths are the fact it's so close in specification to a Fender Standard Telecaster at a much lower price tag.

It's ordinarily true that on super-cheap Telecasters, you get a top-loader bridge, a neck pickup where the height adjustment screws are under the pick guard (requiring the pick guard to be removed just to get to them,) two string trees, and a flush mounted output jack.

On the Bullet, it is a string-thru (important to Telecaster players,) only a single string tree is present (far less kinking noises when bending the G string,) you get in-guard neck pickup height adjustment and the "cup" output jack as mentioned above.

Bullet has everything that matters to a Telecaster player.

What makes it cheaper is the fact it's a basswood body, however that's not something you'll really notice as the body does have great vibration during play. Where you will notice the cheapness however is that the pickup selector and knobs are a bit stiff, it has barely-there shielding so it will buzz a bit (which is nothing a noise gate pedal can't fix,) and the tuners are also a bit on the stiff side.

Which is the better guitar?

The Thinline is better in the respect that nothing needs to be fixed nor upgraded.

However, almost everything cheap about the Bullet can be fixed/upgraded for real cheap. The only thing that will actually cost any real time and money is replacing the tuners. Money will need to be spent on tuners and time spent adjusting the holes so the tuners fit correctly.

Is the Thinline truly worth $270 more than the Bullet?

Yes for the fact it has Thinline-specific features and is much less in price to the next comparable Fender. No in the respect that if all you want is just a good Telecaster, you can get one for much less. A great example of this is the Squier Standard Telecaster which is not much more than the Bullet while at the same time significantly less than the Thinline.

In the end, if you really want a Thinline for less, Squier makes the best one available.

If you just want a good Tele, Bullet fits the bill. And if you want something slightly better but still cheap, Squier Standard Telecaster is the one you want.

Does this mean I'll be buying a Squier Standard Telecaster? No, because I'm genuinely happy with what I have. But if you're on the fence for what to get yourself, you now know your options.