Do you hate reverb? 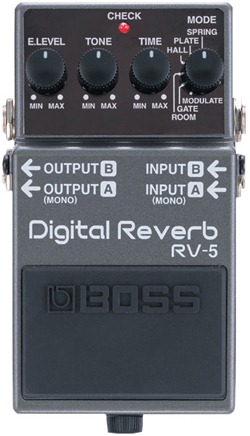 There are more than a few guitar players out there who absolutely hate reverb. And I mean hate it with a passion. They want absolutely nothing to do with it whatsoever.

How I feel about reverb is that it depends what you're using it for, and what type you're using.

The BOSS RV-5 to the right is a good example of some of the reverb types out there. It can do gated, room, hall, plate and even emulate a Fender spring reverb.

I think reverb hate stems from the fact that in some instances you just hear it way too much.

"The sound" of surf music was largely in part due to the Fender's "Reverb Unit", originally making its appearance in 1961. That thing was a real-deal tube-driven spring reverb device; a licensed design from Hammond. Yes, as in the Hammond Organ Company. (I bet you didn't know that one!)

Okay so anyway, there were a lot of songs produced in the 1960s that had reverb plastered all over the place.

Then the 1970s came around; I call that "the dry decade" because while reverb was frickin' everywhere in the 60s, in the 70s it was almost completely shut off. A lot of this was due to disco and funk, where a no-reverb dry sound makes the drums and bass heard a whole lot clearer.

In the late 1970s however, reverb came back with a vengeance in the rock guitar world..

However, when the 80s rolled around, not all was well in Reverb Land. In all music genres across the board, everyone was dousing their recording in super-washy reverb. And a lot of it was awful.

The biggest "offender" for reverb in the 1980s was undoubtedly the snare drum. Instead of an acoustic snare, it was replaced with a digital snare, had so much reverb on it that, well.. just listen for yourself:

Now I know the drummer for Def Leppard is one-armed due to a car accident, and I know that playing drums one-armed isn't exactly easy - but - you can't deny that there is just way too much reverb on that digital snare sample. The song is cool, but every time I hear it, all I hear is that frickin' snare. And I think it's the loudest thing heard in the song.

Then the 90s rolled around, and I call this the "digital reverb" era, because that's when all this crazy new digital gear started going into studios all over the place.

During this decade the reverb, thankfully, was rolled down quite a bit - but with a tradeoff. Instead of it being bonging and washy, now it "snapped" and "whooshed". Losing My Religion is a good example of this:

...and that's pretty much where reverb has stayed ever since. Sure, there have been minor (and I mean minor) variations over the years, but more often than not, "studio reverb" is considered that snappy/whooshy sound.

Today we have the best of all worlds. In a single pedal like the RV-5 above, you can more or less get every reverb type that's ever existed. No, it doesn't reproduce all of them perfectly (no multi-effect reverb pedal can), but the point is that with some simple knob tweaking, you've got it all in a little box.

But should you use it?

Here's how I feel about that:

I personally believe the best reverb types for guitar are "room", "hall" and "spring".

A good reverb sound that pretty much everyone likes is the "sounds like it was recorded in a studio room" thing. And that's room reverb. As long as you don't overdo it, you get that classic blaring-humbucker-through-a-Marshall-in-a-small-room thing going on.

Hall reverb is good for classic 70s and 80s rock sounds like Runnin' With The Devil by Van Halen. Definitely a hall 'verb type.

Spring reverb is when you want to go old-school to the 60s sound because, well, that's what they used and it sounds cool.

In a live situation, my opinion changes.

I am 100% anti-reverb and 100% pro-delay for a live rig. Reverb on a live rig is a bitch to control because it will sound different even with the exact same settings at each different place you play.

The delay effect works a whole lot better for a live rig because a) in the audience it does sound like reverb, b) you can hear it a whole lot better and it's much easier to tweak it on a per-location basis, and c) you're not fighting against the natural reverb that's around you when you use delay.

In the studio, sure I'll use reverb and will readily admit that. But not live.