Everything you ever wanted to know about electric guitar strings 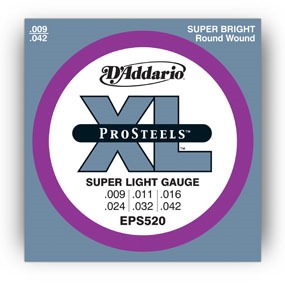 Does choice of string change the sound of the guitar?

Yes, but not for the reasons most players think they do.

As I've mentioned before, I prefer nickel-plated steel strings because they have the in-between flexibility I prefer.

A basic rule-of-thumb when it comes to string flex is:

I'm not going to get into coated strings, cryogenic (as in frozen during manufacturing process) strings, stainless steel or anything like that, because more often than not the only 2 that players pick from are nickel-plated or pure nickel. Rarely does anyone play an all-plain-steel set on an electric, and I'll talk more about that in a moment.

A big reason certain strings sound different isn't necessarily because of the string material but rather how you adjust your playing style to compensate for the flexibility.

If, for example, you decided to try out pure nickel type, such as Fender 150L (light 9-gauge) or Fender 150R (regular 10-gauge,) there are two things you'll immediately notice if you're used to playing nickel-plated. First will be string buzz, and second will be string flop.

Buzz happens because at first you're going to be striking the strings with your pick the same as you would with nickel-plated or plain, and as a result, buzz will happen. So you learn pretty quickly not to strike the strings as hard when using pure nickel strings.

Flop is a clacking noise from the strings hitting the frets, similar to a slap bass sound, which of course is totally inappropriate for electric guitar. You'll notice this most when playing the wound (low E, A and D) strings when you pick and the string has this nasty habit of flopping down hard. Why? Because pure nickel is much more flexible, you pick the string, it bends when you pick, and when it snaps back into place, flop happens and therefore the clack noise happens.

No, pure nickel strings do not make an electric unplayable. Not at all. Some players really like them. But you will adjust your playing style to avoid buzz and flop, even if it's on a subconscious level. It will happen, believe me. Because of that, your guitar will sound different. Yes, the strings themselves make your guitar sound different, but your adjustment in playing style is also a big factor.

In other words, the "warmth" you may hear may simply be because your changed your picking style to have far less strike when playing on pure nickel strings.

Does anyone actually use plain steel strings?

Yes, but there aren't too many offerings where the entire set (as in all 6 strings) are 100% steel with no nickel. One of the few that is available is the D'Addario ProSteels series; the 9-gauge set is the EPS520 (seen right) and the 10-gauge EPS510. If you can't find those in your local guitar store, don't be surprised because most retailers don't carry them.

Plain steel strings typically sound very shrill and have a tendency to rust quickly (as least for the non-coated variety.) The ProSteels are designed not to be as shrill and are corrosion-resistant, but compared to nickel-plated they will probably wear out a whole lot faster, typically. I say "probably" because in all honesty I have not tried them - nor do I have any intention to. Putting plain steels on a Strat would just be way, way too bright-sounding.

D'Addario describes ProSteels as having "penetrating highs," which is a nice way of saying, "pinch-you-in-the-eardrums highs." If you play your electrics acoustically with very little overdrive and lean towards country music a lot, then sure, ProSteels might be just the thing you're looking for. Or if you want "the ultimate in twang," yes, the ProSteels would be very well-suited for that. But for me, no way. I prefer the not-as-bright sound of nickel-plated, and I also prefer the flexibility nickel has.

What's the most common guitar string type that exists?

The roundwound nickel-plated electric guitar string set where the 1, 2 and 3 are unwound and the 4, 5, and 6 are wound is the most common electric string set out of all that exist. The next most common after that is the pure nickel, and after that you have everything else (80/20 bronze, phosphor bronze, chrome, copper, silver, stainless steel.)

In other words, you probably have been playing nickel-plated roundwounds all your life and didn't even know it - not that there's any problem with that.

The major differences between one string and another concerning how they feel and how much flex they have (other than nickel-plated or pure nickel content) depends on core type and core-to-wrap ratio.

For electric strings there are basically only two core types, that being round and hexagonal. The difference between them is easy to describe. Hex-core is more stiff than round-core is.

D'Addario, for example, prides itself on using hex-core wire for wound strings in their string construction.

DR "Tite-Fit" series strings like the 9-gauge LT-9 and the 10-gauge MT-10 are round core and list themselves as such.

When should you choose round over hex or vice versa? If with your existing string set you have the thought of, "Gee, I wish these strings were just a little bit easier to bend but not too much," use round-core. Or if they bend too much, check to see if you're using a round-core set. If you are, switch to hex.

The Dunlop strings I'm trying out now are listed as having a "proprietary core to wrap ratio," which is part of the reason they feel different in the first place compared to, say, D'Addario strings of the same gauge. Does Dunlop actually tell you what the ratio is? No, they don't, and they don't have to because that's probably considered sensitive information. Certain string manufacturers do keep their manufacturing processes guarded so other companies can't copy them easily, and Dunlop is one of them.

Can I personally tell that the Dunlop strings use a different core-to-wrap ratio? Yes. I knew it the moment I installed them as evidenced by how quickly they were able to be stretched and be ready-to-play.

The most common electric string type as you know is roundwound. After that you've got flatwound and half-round.

On the 4, 5 and 6 strings there are wraps around those strings.

If you take your pick and scrape along any one of those, you hear a "shrrrrrkkk" noise. That's the pick scraping over the exposed roundwound grooves and making a noise from them. But notice that if you try the same on the 1, 2 and 3 string, there's little to no scraping noise at all; that's because there's no wrap on the 1, 2 and 3.

Imagine for a moment that the 4, 5 and 6 were thicker versions of the 1, 2 and 3. That's what flatwound feels like, more or less. Flatwound doesn't mean "flat string"; it means that the grooves have literally been ground down and flattened during construction to give a super-silky-smooth feel to the strings. You'll still see the grooves on the 4, 5 and 6, but you won't feel them since they're all flattened.

Half-round means "semi-flat." If for example you tried flatwound but found those strings to be a little too smooth, then you try the half-round.

Why use flatwound? If your fingertips get wrecked so much that the skin breaks away and you're bleeding a lot -OR- if you find your fingertips just hurt like hell after playing for even as little as 15 minutes -OR- if you just can't stand the sound of string drag when you fingers move from one fret to the next when playing, flatwounds will be a godsend for you; it's the most-comfortable string that exists...

The problem with flatwounds is that you lose tactile feel by using them, which in plain English means, "you sometimes forget where you are on the neck because you were used to the roundwound grooves being there." Or to say it another way, flats sometimes "feel like they're not there." If that happens, and you really like the feel of flats but need just a little roundwound groove for tactile feel, that's when you use half-rounds.

As for which 'flatter' wrap type to go with first, I'd say try half-rounds first. Flats for most players just "feel too weird" unless you're already very familiar with what they feel like. But I do suggest trying a set of flats anyway just to experience them. Even if you hate the feel of flats, it's good to try them at least once.

D'Addario pretty much has the market cornered for half-rounds. For 9-gauge there's the EHR320 and for 10s the EHR310; both of which are commonly available in guitar shops because many players take a liking to them.

For flats, again, D'Addario pretty much has that market cornered. I'd suggest trying their "Chromes" series 10-gauge ECG23 (which I think is the thinnest gauge offered and it goes up in thickness from there.)

Are all strings basically the same?

Most are when it comes to nickel-plated roundwound, but when you do your research you find the ones that actually use different construction methods are those that truly separate themselves in feel and tone from each other.

If you played D'Addario half-rounds, those are nickel-plated strings using a hex-core with semi-flat wrap grooves on the wrapped strings.

If you played DR Tite-Fit, those are nickel-plated strings using a round-core with roundwound wrap grooves on the wrapped strings.

If you played Dunlop DEN0942, those are nickel-plated strings using a hex-core (not confirmed, but I think they're hex) with roundround wrap grooves on the wrapped strings using a different core-to-wrap ratio compared to other strings.

As for the pure nickel type strings, they're very bendy whether round-core or hex-core is used. They're typically heralded as "the string" for classic rock tones because the floppy nature of them can make chords ring out in a way that a lot of players like. For example, "vintage Telecaster tone" is something pure nickel strings would be good for.

As for whether you would like them or not, you'll just have to try a set and see what you think.