Fans don't care what brand of guitar you play 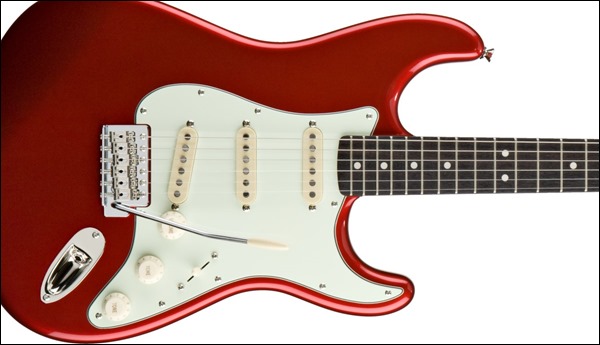 Above is a guitar. I won't tell you what it is (you can see it on the link if curious,) and the reason I'm not telling you is because in the end, from a fan's point of view, the brand of the guitar absolutely does not matter.

Something a lot of guitar players forget is that when it comes to what other people - as in NON-MUSICIANS - think of the gear you own, only two things matter. The shape and the color. That's it.

The two most recognizable solid-body guitar shapes are the Stratocaster and the Les Paul. As long as the guitar is one of those two shapes and has a color that looks cool, nothing else matters in the eyes of a fan.

And if you want to complete the package, so to speak, you can use any amplifier that says "Marshall" on the front with the gold-color control plate like this one, or any silver-face Fender amplifier like this one (which is lot cheaper than the Marshall, by the way.)

The cheapest way to get that guitar look is to buy a Squier and a low-cost Fender amp. The total cost is between $500 to $600 USD if you bought everything all at once.

In reality, nobody cares what the amp looks like either, so you could probably slim the total cost down to $400 or maybe even less - again if you bought everything all at once.

What is a guitar that "looks cool" to a non-musician?

Answer: Any guitar that doesn't look like a children's toy and appears expensive.

If the guitar is of a standard adult size, the shape is correct, logos are correct, colors are correct and it appears upscale, that's a winning formula.

A guitar that absolutely nails it is the Squier Vintage Modified Stratocaster in "vintage blonde," which I did own at one point:

The only reason I parted with this guitar was because of finish issues (it had a few chips in the paint, and the paint on the back of the body looked iffy.) However I may pick up another one of these because I'm sure those QC issues have been addressed by this point.

This Strat is something non-musicians are easily impressed by. Very cool look, very cool color, proper black-and-gold logo, "swoop" STRATOCASTER logo, 3-ply pick guard, and so on. It's all there. It's also a fantastic sounding, fantastic playing guitar.

Believe me, Squier really nailed it right with this particular axe. And as far as non-musicians are concerned, this guitar is 100% coolness defined. If I weren't so much into Jazzmaster guitars, I would have bought another one of these already.

And speaking of the Jazzmaster:

While I prefer the red Jazzmaster I currently own, if I was going to buy one specifically to impress non-musician types, I'd get the sunburst version.

The Jazz isn't recognized like the Strat and Les Paul are, but in sunburst it looks like something that came straight out of 1964 - and that's not a bad thing. It has a big, leaning body shape that's very curvy and almost has a "fast" appearance to it. It's just a cool shape all around, and quite the comfortable player.

I don't recommend the Jazzmaster nor the Jaguar (available in the same sunburst color) to beginner players because the guitar has a lot going on with it. But if you're willing to sit down and figure the guitar out, it's a great looker and great player.

On a final note, let's talk about the Les Paul.

Now although I'm not into Les Pauls (I traded mine out,) and not really into Epiphone brand either, there is one Les Paul they make that absolutely nails the vintage vibe, and that's the "Collection" Les Paul in a finish called Honeyburst:

Now you might be thinking that the classic Les Paul look is to get one in Heritage Cherry Sunburst - and you'd be right, as that is the classic Paul look.

However, this mid-priced Les Paul in Honeyburst has more vintage flavor going on with it. There's no obvious red in this finish, giving the guitar more of a gold color. As such, it has a more upscale look.

Not my kind of guitar, but it's gorgeous. And to the non-musician, it's the kind of axe they would look at and say "Wow!" because yeah, it looks that good.

Another thing I should mention is that while Heritage Cherry Sunburst is a classic look for a Paul, the way Epiphone does it doesn't really look that great in person. I know this because I've seen and played one personally. The best way I can describe the color is that it's almost orange-like. Gibson's red actually looks red on a burst. Epiphone's doesn't.

Honeyburst on the other hand has the gold look to it, and that's a finish Epiphone totally gets correct. If it's gold or gold-like, Epiphone is good. If it's red with a burst, I've not seen an Epiphone yet (not on a solid-body anyway) that really made it work.

The "safer" of the colors, and the better one in my opinion, is the Honeyburst over Heritage Cherry Sunburst.