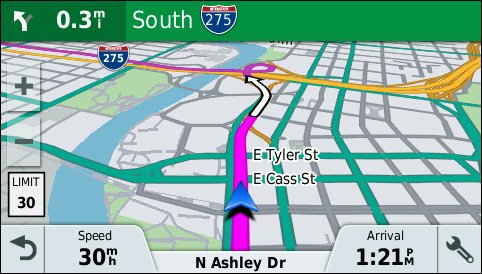 It's been a while since I've said anything about GPS, so I figure it's time for an update.

The model of satnav I use these days is the Garmin Drive 50LM; a 5-inch model from 2016 that I bought originally as a refurb. The 50LM is not all that different from the Drive 51LM, with the only real difference being the 51 has more smartphone-specific features in it.

Both the 50 and 51 5-inch versions (along with 60 and 61 6-inch versions) use matte screens which can be read easily even when wearing polarized sunglasses. Both of them also can be used in either horizontal "wide" or vertical "tall" orientation, albeit that setting has to be adjusted manually.

For the fancy schmancy multi-touch glass screen, you get that on the DriveLuxe 51 5-inch and DriveSmart 61 LMT-S 6-inch.

The model with the largest screen area using the least physical space is the DriveSmart 61 LMT-S model with its 6.95" edge-to-edge display.

Whether to get a 6 or a 5 depends how close the screen is to your face when driving.

In large vehicles like a big SUV or RV, yeah you need the 6. For passenger cars however, no you don't. Whether you mount the satnav on the windshield, to a vent via a vent clip or via adhesive disc to the dashboard, the 5-inch is the best for the passenger car.

Where screen legibility is concerned, all Garmin Drive, DriveAssist, DriveSmart and DriveLuxe models have "themes" that allow for different color schemes with better contrast. In older models, all you had before was "day" and "night" modes for color choices, but now you get a bunch more that makes for easier reading.

Touchscreen is responsive, backlight is bright, everything is legible and readable, route calculations and recalculations are very fast, TTS (text-to-speech) voice is incredibly good now (nothing like the computery TTS voices on the older models.)

Even on the most "basic" Drive model, which mine is, you now get a Trip Planner (multiple waypoints can be set for a single route,) custom avoidances (you can set roads and/or areas to avoid,) and route choice (for most destinations, you're given the choice of which route you want to take instead of just one, and you can customize the route.) All this stuff was previously only available on very high-end Garmin units.

Is the routing good? Yes. For most destinations, the first route choice Drive gives you is usually the best one.

Easy to figure out? Yes. If you've ever used a smartphone or tablet (who hasn't?), anyone can learn this thing. Manual not required.

Is it reliable? Yes, very reliable. But I still carry a backup GPS. More on that in a moment.

Is it sturdy? Yes.

Can you hear it? Yes. The little speaker does well for something housed in a case that's only 2cm thick.

How is the battery life? Terrible as usual at just 1 hour. However, this is normal for all satnavs these days regardless of who makes it. And since everyone uses a satnav plugged in anyway, battery life really doesn't matter.

I still carry a backup GPS in the car

I always use GPS when I drive, enough to the point where driving without it just feels weird.

It's been 12+ years since I started using GPS. In that time, I've only had one Garmin satnav (StreetPilot i3 model) crash so hard that it locked up the unit for a few minutes. And that was back in 2005. Since then, I've never had a Garmin exhibit a hard crash like that. But even so, satnavs are tech. Tech sometimes breaks unexpectedly for the weirdest of reasons, and that's why I carry the backup.

I may never use my 40LM except for checking it once every few months to make sure it still works. But if it ever happens that my 50LM fails, I will be very happy to have that backup.