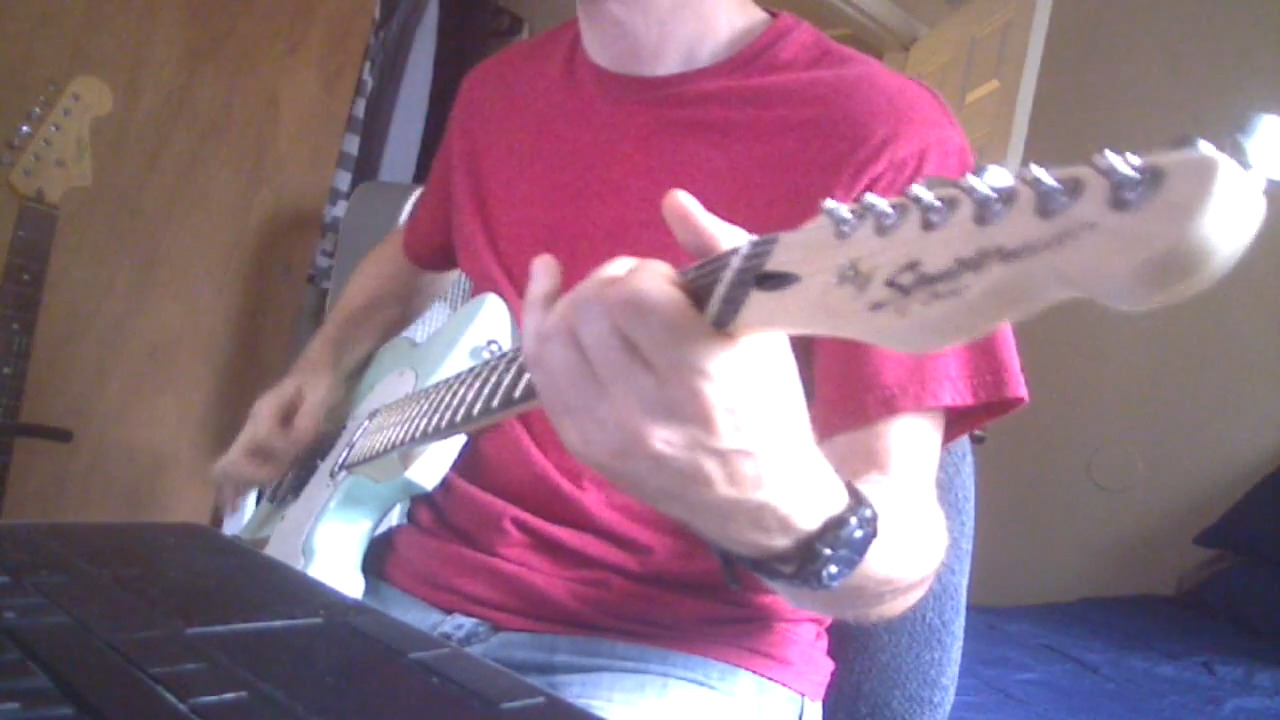 Not only does playing in E flat put less strain on your hands and wrists, but it also opens up a sonic palette that sounds very different from E standard.

If tuning Eb, the characters for each string is Eb-Ab-Db-Gb-Bb-Eb. If tuning D#, the characters are D#-G#-C#-F#-A#-D#. Are both these sets of characters the same notes? Yes. Which you use directly depends on what your digital guitar tuner displays.

The easiest way to tune to E flat is to use a digital tuner with a flat switch for stupidly easy and fast Eb tuning, which of course is the Korg GA-1. You'll see the "FLAT" button right on the front; it doesn't get any easier than that.

I may tune my Telecaster to Eb permanently

The strings in standard tuning felt too tight on my Tele, so I pitched it down to Eb. When I did that, the guitar felt much better, so I just left it that way.

Now that I've been playing in Eb, I actually quite like it. It's distinctively different compared to E standard.

The looser feel of the strings makes string bending much easier, and snapback (a finger pull on a string where you pull, let go and let the string purposely strike the frets) has greater attack.

Bass frequencies are heard more clearly, certain chords sound fuller and the guitar seems to stay in tune much better when a capo is attached.

The most famous Stratocaster player I know of that used Eb tuning pretty much always was Stevie Ray Vaughan. Fans of his tone who study it believe his tuning preference was a huge reason his guitar sounded the way it did.

Other players and bands who use Eb regularly are Jimi Hendrix, Guns N' Roses, B.B. King, Danzig, Disturbed, Extreme, Green Day, Journey, Slayer, The Smithereens and many others.

Does Eb tuning work on all guitars?

Your #1 enemy with Eb tuning is string flop. Flop means "to fall heavily due to lack of energy." When tuned a half-step down, string tension is lessened and your strings may literally flop around in an unwanted way.

The general rule of thumb is that the shorter the scale, the more you have to accommodate for string flop when tuned to Eb.

On 25.5" scale guitars (ex: Stratocasters and Telecasters,) you can usually get away with Eb tuning without having to adjust anything.

On any guitar that uses a vibrato system, that absolutely has to be set up again for use with Eb tuning. Whether it's a Stratocaster "tremolo" system, Jazzmaster or Jaguar vibrato system or whatever you have, the tension set either by screw(s) and/or claw springs will have to be tightened slightly.

How will you know for sure if your guitar needs adjustment or not in Eb tuning?

Tune to Eb and check for buzzy frets, fretted out notes (i.e. when the string "squeaks" on a note bend,) strings that go out-of-tune easily from your fret hand grip (thicker strings usually fixes that,) and so on. Also check your vibrato system to make sure that's working the same as before.

Believe me, it will be very easy and obvious to recognize if your guitar needs adjustment while in Eb tuning.

If however you tune to Eb, play the guitar for a while and think to yourself, "this guitar pretty much plays and sounds the same in this tuning, just with slightly looser strings," then you probably don't need to adjust anything. But I'd still check the neck relief to be on the safe side.

The entire tonal character of your guitar changes when tuned to Eb. It may be only a half-step lower than usual, but it makes a huge difference when coming up with guitar riffs.

Think of when you first tried drop D tuning. That only required the detuning of a single string from E to D, and it made a big difference of how things sounded on the low end.

Think of when you first tried a capo (and if you haven't used one yet, get one.) Your guitar sounds like a completely different instrument when using one of them.

I consider Eb tuning the same as using a "capo in reverse," so to speak. In Eb, you will play things differently and riffs will sound different. It does affect how you write songs.

Eb tuning does save your wrists

There are many guitar players who detune to Eb simply for ergonomic reasons. Easier to hold chords in Eb? Yes. Easier to solo in Eb? Also a yes.

Lastly, if you've been bouncing around string gauges where one gauge set feels too thin, the other set too thick and you can never seem to find that happy medium, sometimes a thicker gauge set tuned to Eb is just the thing you need. But mind that scale length. If you own multiple guitars of varying scale lengths, Eb may work fine on your Strat but feel awful on your Les Paul. Fortunately, it's easy to try, so give it a go and see how it feels. You may like it.