Recently I had to create a POI file that had close to 200 waypoints in it. For those that are interested, it's a POI database that has all Tampa Parks, Rec Centers, Playgrounds, Beach Parks and anything else in Tampa that's officially listed as a park. I made the database because I'm a photo bug and outdoor scenery is usually at its best in a park.

So anyway I get my database all set up and ready to rock. I use the Garmin POI Loader to send to my StreetPilot c580. Everything goes fine.

I fire up the c580 to inspect all my newly uploaded POIs.

After I did some quick research, this is what I found out:

If you upload a POI with more than 50 waypoints in it, only the first 50 closest to your current location will show up. All the waypoints are in there; none of them got missed.

So how do you find the ones that don't show up?

You can do this in one of three ways.

Spell out the name of the waypoint and it will appear. You can then tap it and go.

For example, several Tampa Parks have the word Springs in it. I just spell out the word and the StreetPilot finds all the waypoints in the POI db with that word in it - just like Favorites. 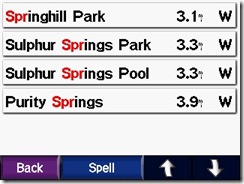 2. Choose "A Different City" before going to the POI db

My Tampa Parks database only covers one city (obviously). But if they covered multiple cities I could choose a different one to find locations in the POI db near somewhere else. 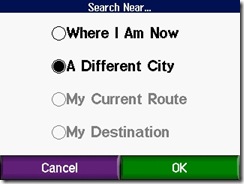 3. Break up the POI db into smaller db's of not more than 50 waypoints each

This is what I ultimately decided to do for fastest access. I broke up the large db into smaller ones based on alphabetical title order. 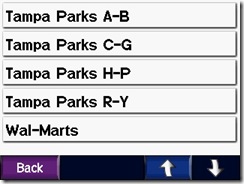 I also left in the single big POI db as a separate category just in case I needed it for whatever reason.

Have POI db's of not more than 50 waypoints will ensure all will show up whenever you bring up the waypoint list.

POI db's in the future are going to be easier to manage, but at the present time this is still a very new thing and yes there are limitations; GPS enthusiasts like myself find workarounds for this stuff.

But make no mistake, it's nothing short of super-cool that the ability exists to trade waypoints as POI db's, even for GPS units not made by Garmin, with relative ease.