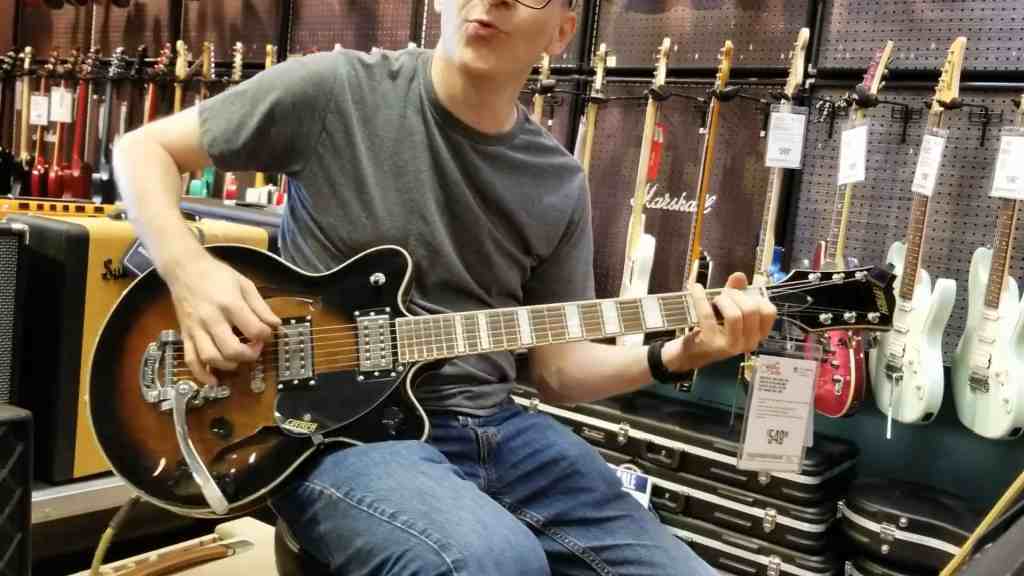 When you want a Bigsby vibrato on a genuinely well-built guitar for not a lot of money, you go Gretsch.

However, the big deal is the Bigsby virbato system. While true there are other guitars that have this system on it (like a Telecaster Bigsby or Murphy Lab Les Paul), the Gretsch is the most approachable for basically one reason:

It's not a boat anchor.

This Gretsch is - get ready for this - typically under 7 pounds in weight. This is unheard of for any electric guitar with a Bigsby system. So not only can you get a Gretsch at a very nice price and looks great and has the Bigsby system, you also get something that won't break your back. Pretty sweet deal if you asked me.

Why would anybody want a Bigsby in the first place?

A Bigsby vibrato is for the type of player that likes a vibrato system with more precise note bending; this is mainly due to the wider vibrato arm (it sort of looks like a butter knife) that stays put.

Some say it's difficult to keep strings in tune with a Bigsby system. Not true. It's no more or less difficult than a Jazzmaster/Jaguar vibrato. When your strings are properly stretched, it will work as intended for "slower" bends.

Spanky vibe without the hum, but with atypical controls

Gretsch humbucker pickups are bright in responsiveness by design, which gives the G2655T a sound Gretsch guitars are known for. It can rock, to be sure, but sounds better with cleaner tones.

A typical-to-Gretsch thing is the master volume control near the front of the guitar. I'll admit I'm totally not used to it, but it's not difficult to figure out. That front knob is master volume, then the other 3 are individual volume controls per pickup, and one master tone control.

This type of control setup lets you get any volume blend of the two pickups that you want, and then you can use the master volume control to set how much output you want; that's the advantage of Gretsch controls.

With this Bigsby-equipped guitar, you get a lot for the money

When you want to dive into the realm of a guitar with a Bigsby vibrato system on it, you really can't do much better than this. The key thing, other than the nice price, is its light weight. You're not going to be dealing with some monster-weight 11+ pound electric guitar with the Gretsch. Instead, you get something light that looks great and has good tonal character to it.

I'd argue the Gretsch G2655T Streamliner Center Block Jr. is the best "gateway to Bigsby" electric guitar there is.