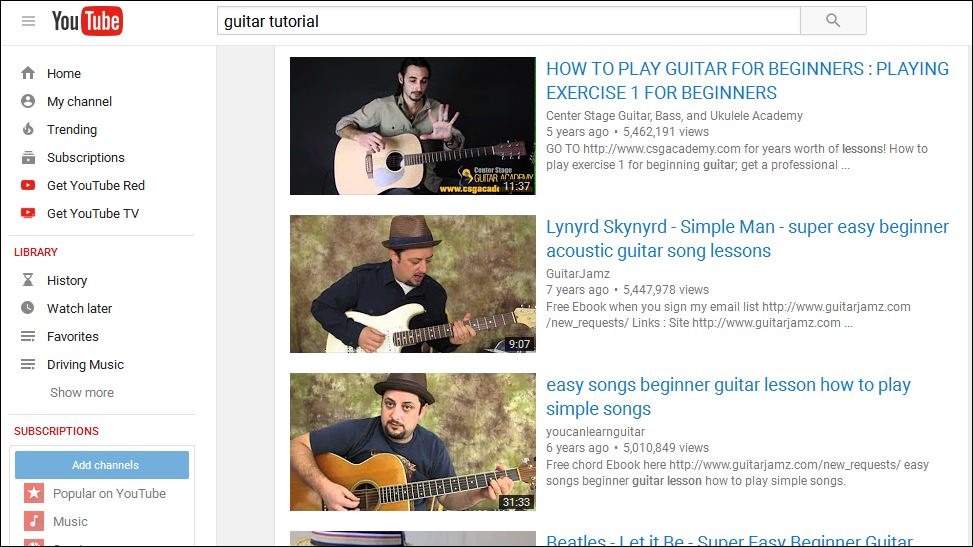 Posting guitar tutorial videos to YouTube is a complete waste of time.

Why? Before I answer that, what I mean by "guitar tutorial" is actually song tutorial where you, the instructor, post a video on how to play a song written by another band or artist on guitar to the YouTube audience.

There are 5 main reasons why posting guitar tutorial videos to YouTube is a stupid idea.

1. The likelihood of your video getting banned is very high

In order to teach a song, you actually have to play it on the video. But uh-oh, if you do that you get flagged for a "content match", and you know what that means. Disabled video, then deleted automatically. Do this enough times, and your channel will be terminated for "repeated violations". This is something that's happened to many, many guitar players that used to post tutorial videos on YouTube.

It is so bad now that even if you just play a riff of a song with no backing track whatsoever, the YouTube system will detect it and ban your video. Yes, really.

2. Unless you sound exactly like the original recording, morons will say you're "doing it wrong"

But let's say you do make your guitar tutorial of a song sound exactly like the original studio recording of the song you're covering/teaching. Guess what? BANNED for "content match". You can't win.

I've never known any guitar teacher to ever bring in six figures a year, never mind millions. You won't make any real money from guitar teaching. And by real money I mean something you can actually live off of.

The majority of guitar tutorial videos that have millions of views are 5 to 7 years old on average. None of the newer videos ever make it up through the ranks and never will.

Are you seriously willing to wait 5 years for a million-view tutorial video that could be flagged by the content matching system at any time? I didn't think so.

5. Guitar tutorial videos do not bring in subscribers

Those that use YouTube to make a living know that a channel lives and dies by its subscribers. Channels that do not continually grow the subscriber count die off quick.

Those channels that have these several-million-view tutorial videos? I've only seen one that has over a million YouTube subscribers. Then there are a few that have 500K to 700K subs. Then after that it dives down hard.

Just from a quick YouTube search, I found channels with tutorial videos with 4M to over 5M views but less than 200K subscribers to show for it. Some have even less than 100K subscribers. That's pathetic.

In other words, high views don't guarantee subscribers. And without subscribers, you go nowhere fast on YouTube.

Is there a way to teach guitar via video without getting banned by YouTube?

Simply put, no there isn't.

But if you're intent on teaching guitar online anyway, there is an alternative to YouTube.

I suggest publishing an eBook and then using video to help sell it instead of teaching just by video alone.

For example, there is Amazon KDP (Kindle Direct Publishing) which anyone can use. You could write and publish a book through that system. When browsing all the guitar tutorial books on Amazon, you'll notice over 2,000 of them are published on Kindle. And with a little extra effort, the KDP system can even make a paperback print version for you.

As for where to publish your videos to tell people about your book, use Facebook and Twitter for that, and purposely keep your videos under 2 minutes in length. Posting small videos is easy for people to digest, and if they like your stuff, yes they will buy your book.

Could you use YouTube to promote your book? Yes, but the likelihood of your video getting banned is so high just from playing a riff that it's not even worth it.

If you watch popular guitar YouTube channels at all, you've probably noticed that when the guitarist play riffs to known songs, he will intentionally change around the riffs and/or keep the sample of the song to under 30 seconds in length. That's because he is very aware of the YouTube content matching system and understands that if the system identifies any sort of audio match with a copyrighted work, that means a banned video, so he doesn't take the risk.

Don't expect to become a millionaire with guitar tutorial videos. If you're okay with that and just want to make a few bucks on the side, that's fine. But don't do it on YouTube. Write a book and promote the book with video on other platforms. It will save you a lot of headaches.