How to build an electric guitar the easy way

The term "build a guitar" is a little bit weird because sometimes it involves actual woodworking and other times it does not, so I'm going to cover several build types here.

Build Type 1: Everything except the paint 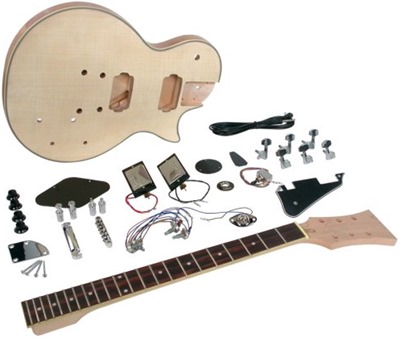 Above is the Saga LC-10 LP Style Electric guitar kit, and it's the one I could find that contained everything and did not require any wood cutting afterward.

While true the top of the headstock is totally flat-shaped, the point is that you could put this whole thing together as-is without the need to do anything else.

This Saga kit does have every single thing needed to put together a working electric guitar. 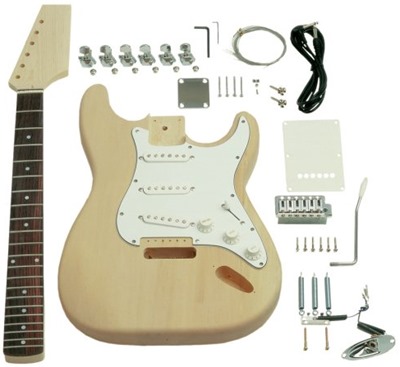 Above is the Saga ST-10 S Style Electric Guitar Kit. This is a Strat-style, and the first thing you'll notice is that the headstock is a big plank. You could leave that as-is, but that would look stupid, so you're going to have to do some wood cutting here.

The advantage of this kit over the LC-10 is that it's almost $50 cheaper. 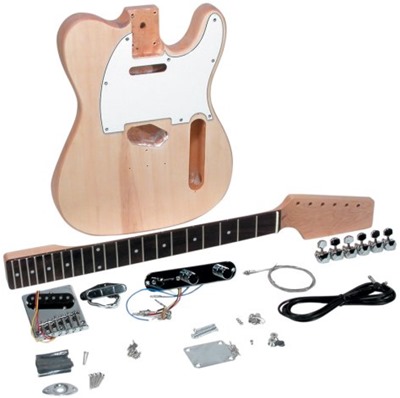 Above is the Saga TC-10 T Style Electric Guitar Kit. Basically the same thing as the Strat kit in a Telecaster style.

This Telecaster-style kit is the easiest to put together because it has the least wiring involved. Two pickups and just two pots to install and wire up instead of 3 or 4. In addition, there is no vibrato/tremolo system to install either. It doesn't get much easier than a Tele.

Build Type 3: Nothing but upgrades

This is where you buy a complete guitar and simply upgrade the parts. The qualifies as a rebuild rather than a build, because you're not really building anything.

So if you bought one of these:

Then bought this prewired pick guard and installed it (which by the way will fit correctly because the Squier Surf Strat does fit American pick guards): 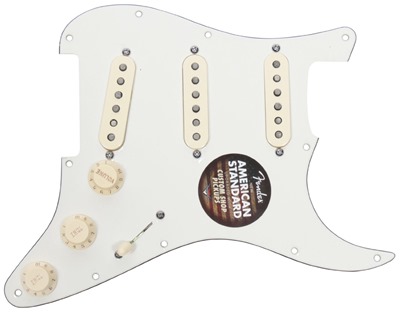 ...that's not a build, but rather just an upgrade/rebuild. And there's nothing wrong with doing just upgrades.

This is the point where things start getting really expensive.

With prefabricated bodies and necks, Warmoth is the only name you really need to know.

When you source a body and neck from Warmoth, you're going to spend at least $450 to $600 for just those two things alone.

When you source out your parts, all of that stuff put together can be anywhere from $300 to $500.

Yes, this means you can end up spending the same price on your premium woods/parts build as you would for an American Standard Stratocaster.

And I know a bunch of you just said "Screw that!" the moment you realized how much sourcing out premium woods and parts will cost you. That's okay because you have other options to keep it cheap but at the same time keep it good. Keep reading.

The thing that truly makes a guitar bad more than anything else is a bad neck. And what I mean by that is a neck with badly cut frets, a bad neck pocket connection where the neck meets the body, and a truss rod that just doesn't work at all.

If you spot a really cheap guitar where the neck is straight and the neck pocket connection is good, you can rebuild it. Yes, you can. It doesn't matter how bad the pickups and the rest of the electronics are, because that can all be replaced. What matters is the neck. If the neck checks out, you can make it better. A lot better.

There is a guitar build project on YouTube called Sh--e Paul. Here is the whole web series below (all 9 videos are in the playlist box below). The builder takes a guitar that is an absolutely, totally awful, seriously crappy guitar and rebuilds it. The whole thing.

Here's the whole series. For now, skip to part 3 where he installs the frets. You can see that it's really not that hard to do.

You'll notice that the builder purposely keeps things really cheap, but is still able to make a relatively good, playable instrument out of it.

The piece of crap guitar you buy, should you decide to do this, will probably not be anywhere near as bad as the S--te Paul.

What kind of crappy used guitar should you get that's the easiest to rebuild?

Squier Stratocaster or Squier Telecaster. Even with the worst of neglect, those guitars can be completely rebuilt easily. Another reason to go Squier is because replacement Strat and Tele parts are widely available.

More often than not, crappy used Squier guitars only need a truss rod adjustment, a fret leveling (get this fret leveler kit for that), a new set of proper tuners, a new nut and a simple gut-and-rewire of the electronics and pickups.

You can, and this is no joke, get yourself a truly great-playing, great-sounding guitar for under $100 if you're willing to put the work into it. And there's really not that much work involved.

I only list this one to answer the question of, "What is the cheapest guitar build there is?" Answer: Cigar box guitar. It's under $50.

Build Type 7: Cutting and shaping your own body and neck

This is the last build type I will mention. It's not the most expensive, but it is the most time-consuming.

Cutting a body is actually not that difficult. The body is the larger part of the guitar where you've got room to work and you're allowed to make a few mistakes that you can cover up, should you make any.

Technically, if you wanted to, all you need for a body is a block-of-wood style thing, kind of like a Bo Diddley guitar:

So if you wanted nothing but a big rectangle, yeah, you can do that.

Cutting and shaping a neck is the hard part. It's not easy and never has been. There's a good amount of math involved, a lot of trial-and-error getting the rear and front curves just right, and even if you have the proper machines to shape a guitar neck, it can still come out wrong.

I can't tell you how to shape a neck, because I'm not a luthier. But there are tons of YouTube videos on the subject of how to do that.

What I can say is this concerning guitar neck fabrication: Expect your first one to be totally awful. You will have to build at least 4 necks before you start getting an understanding of how it's done right, but even then it is going to take you a good long while to really get the gist of it.

When it comes to guitar electronics, that you learn quickly. When you know how to do proper soldering, proper shielding, proper wiring and learn the basics of how to read an electrical diagram, it's really not that difficult to figure out because there's really not much to it on simple passive setups.

Luthiery is not something you can learn in a week. Or a month. Or a year. It takes years of practice to really know how to shape a piece of wood correctly from a wood blank. I'm not saying this to scare you. I'm saying it because there is no magic button you can push and them claim "Yep. I'm a luthier now!", because that's just not the way it works.

What's the best build type for most players?

"Nothing but upgrades" listed above is what most players are comfortable with (jump back up there to read that again if you wish). You stand the most chance of being successful with your mods with the nothing-but-upgrades approach.

The way I suggest going about that is to either buy a crappy used guitar with a good neck on it, or buy a new cheap guitar. I don't suggest modding your existing guitar, because if you break it, then you have no guitar.

Start off with something as cheap as you can get it, hack it up and see what you can do with it. If you're successful, then you can move on to modding your main guitar. If unsuccessful, no big deal because even though you can't get the money back that you spent, you did buy something - knowledge and experience.

The knowledge and experience gained from a failed build is valuable, so don't be afraid to make mistakes.

Most players are "modders" and not builders. And that's fine. You're a guitar player first, so you want playable instruments. If you have to stick to modding-only territory to do that, that's okay.

On a final note, the one thing about guitar building that nobody seems to mention is time. If you were to construct a complete guitar from wood blanks start-to-finish, that's not a weekend project. That's a several-months project. Do you have that kind of time to dedicate to building a guitar? Probably not.

Mods, on the other hand, can be done in a weekend or even just a day. Go do your mods and play happy, but just remember to start your first mods with a "throwaway" guitar. Not only will you be more comfortable modding a throwaway guitar, but you'll also be willing to take more risks and learn more in the process.

Jackson JS11 Dinky, the ultimate project guitar?
When it comes to ready-to-mod guitars, it doesn't get much better than this.
⭐ Recent Articles ⭐