Note up front: Yes, I made the above image. It's the "I'm as mad as hell" scene from Network.

I wrote up this article because there didn't seem to be anywhere else on the internet that said in plain English, "This is how you make an animated GIF from video clip."

Anyway, let's talk about animated GIFs and how to make one from a movie clip the free and easy way.

The animated GIF (which I pronounce with a hard G, thank you very much,) is something that's been around pretty much since the popular internet started. I won't go into the history of it because that's not important. What is important is how to make one of these things for free.

How to make a movie clip

Use VLC for that.

Launch VLC, press CTRL+P for Preferences, click "Simple" at bottom left, click "Input / Codecs" and where it says "Record directory or filename", click the Browse button and set it to a folder you'll remember. Save and close/restart VLC.

Click on View at top and enable Advanced Controls. Play a video, and when you want the clip recording to start, hit the red button at bottom left: 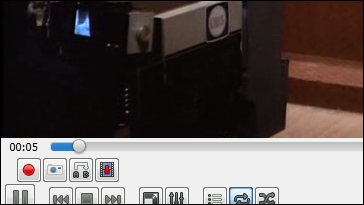 Hit it again to stop. A video capture file will be created and dumped to the folder you specified above.

How to edit your movie clip

Use Windows Movie Maker for that. It is suggested that your clip have a maximum running time of not more than 10 seconds, else it may end up being too big of a GIF for use on most web sites.

When you save your movie clip, DO NOT USE SPACES in the file name. Replace spaces with hyphens. Instead of saving the file as my video clip.mp4, use my-video-clip.mp4 instead.

What to do with FFMPEG

Create a folder on the desktop called GIF.

Open the FFMPEG archive you downloaded and open the folder bin inside there.

There will be a file called ffmpeg.exe. That's the only one you need. Take that file and put it in the GIF folder on your desktop.

What to do with your movie clip

Put the clip(s) in the same GIF folder where ffmpeg.exe is.

If all has gone well so far, you've got a folder called GIF with ffmpeg.exe and a movie clip in it, like this: 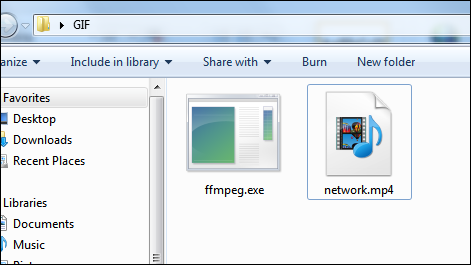 Converting the movie clip to GIF

If my video clip file name was network.mp4, I would type it out like this:

The -i part is the input file, followed by the video clip file name. The -vf is the video filter part to scale it down to 300 pixels wide and auto-adjust the height. The -r part is to set the frame rate, which I set as 10. Finally, the name out of the output file I want.