I haven't upgraded to Windows 11 (and probably won't)

...but I'm at the point where the Win10 OS on my computer runs more or less the way I like it.

When I switched from Win7 to Win10, that was awful and I immediately wanted to switch back to Win7, but couldn't because my 100% purchased (yes, I bought it) and licensed copy refused to "activate", so I was stuck with 10.

After some time, using some helpful tweaks and figuring out how to disable a bunch of crap, Win10 then became usable. Mostly. What I basically did was everything possible to make Win10 act like Win7. There's still some Win10 crap I have to deal with, but at this point it's minimal.

Could I still run Win10 after that day? Yes. For how long? Probably a few years. But I know I can only do that for so long...

...which means I'm thinking about Linux once again. I was very close to switching over to it back in '21. Oh-so close. But I couldn't because there are a few Windows-specific things I need for my daily computing life, so Linux wasn't a doable thing.

At this point in late '22 however, things have changed:

A simple example of this is printing. To the best of my knowledge, all wireless printers can be accessed with a phone app now. If my Linux distro of choice decides it doesn't want to talk to the printer, I can copy the PDF to the phone and have it send the print job.

Another example is browsers. I use Firefox which has add-ons in it. But I also use Microsoft Edge bone stock and plugin-less specifically for instances when a web site just absolutely will not work without a browser that allows everything. But sometimes that doesn't even work. When that happens, that's when I grab the phone and use the site's app. When their site doesn't work, the app will. And if the app doesn't work, then I 100% know the site is having a problem on the site's end.

Were I running Linux, same situation. If whatever browser I'm using won't load the site, grab the phone, run the app.

I could list other examples, but you get the idea.

The realization that if I absolutely need Windows for something, buy another computer

This sounds stupid, but it's not.

You can get a laptop for under $200 new easily.

If there's a thing I need Windows for, it's actually cheap enough just to outright buy the hardware and only use it when needed - which in all honesty would not be that often.

In other words, a Windows laptop would act the same as having a specialty tool in the toolbox. It doesn't get used often, but it's there when you need it.

More software is "rent me only"

The technical name for this is a subscription service. An example at the time I write this is anything Adobe. You can't buy the software, but you can rent it. Adobe Photoshop will cost you $31.49 a month: 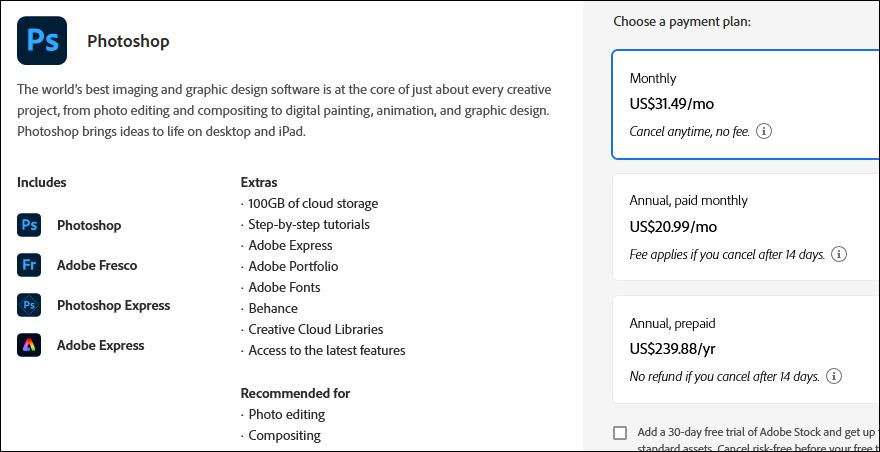 (Yes, this means had I edited the above image you see right now in Photoshop, it would have cost me a bare minimum of almost 32 bucks.)

Only once have I ever actually rented software, and it was for a navigation app on the phone. It was an annual subscription thing for something like 20 bucks, but before buying, I asked myself, "Am I willing to throw away 20 bucks just to see if this works out for me?" My answer was yes, I spent the money, discovered that I didn't like the app and didn't renew the subscription.

That was the last time I rented software.

Both the online-account-required and rent-me-only crap introduces the problem that the internet is necessary just to do stuff.

Right now with my Win10 installation, if the internet cuts out as it periodically does, I can still use my computer. Edit my documents, watch some movies either downloaded or on DVD, edit audio, edit images, whatever. I can do all that without any "INTERNET REQUIRED, LOGIN NOW" roadblock.

If however my PC required internet just to work, would I even be able to get into my computer? Yes, but at the same time no. I could probably login, but parts of the OS would be unable to function, and any software that required an online login obviously wouldn't even launch.

With the phone, yeah I can understand the online-required/account-required stuff because it is, obviously, a mobile device. But my PC is not mobile, nor do I need it to be, nor do I want it to be.

Ultimately, I may give Linux another go to specifically avoid the online-account-required and rent-me-only crap.