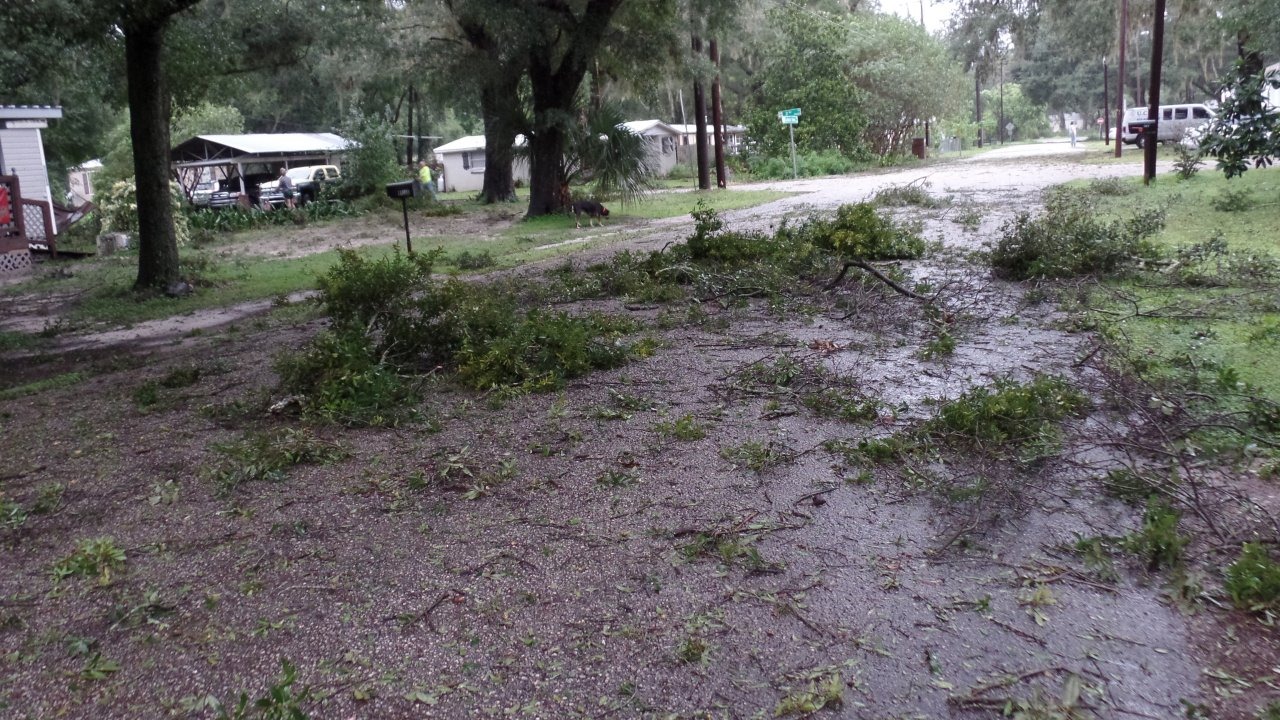 Well. This was an adventure.

I live in Tampa Bay Florida in Hillsborough County, which is part of where Hurricane Irma passed through with Category 2 wind strength.

Yes, I am okay. None of my stuff was damaged. The only damage outside that happened was that a part of a wooden fence I have on the property got ripped apart a bit, but it's nothing that can't be repaired.

The worst part of the storm wasn't the storm itself but the 37 hours I was without power after it. More on that in a moment.

You're not a true Floridian until you've lived through a real deal Florida hurricane, and I did it. Was it a smart move to stay here and wait out the storm? No, absolutely not. It was stupid to stay. I should have just packed a bag, hopped in the car and drove north - but - I might have ended up in a worse situation compared to actually staying. I'll talk about that more in a moment too.

Reports of Irma's strength shifted constantly. It was CAT5 before Florida, then it was supposed to be CAT3 when it hit Florida but bounced around between CAT3 and CAT4. Then it was predicted Hillsborough County was to get hit with CAT3. Then that was downgraded to CAT1.

What really happened? CAT2 wind strength over Hillsborough. And I was so close to the eye wall of Irma that it wasn't even funny. Polk County actually got the worst of it when it blew through here, but on my side of Hillsborough it was dangerously close to being just as bad.

How can I describe experiencing a CAT2 hurricane at midnight? I can't. There is no way I can describe what that feels like, but that's when the worst of Irma happened here.

On September 10, 2017 at about 10:30pm my power went out, so all I had was this little radio to tell me what was going on. The station I had tuned in was simultaneously broadcasting what was on television, and the meteorologist said the worst of it was coming soon.

Before the power went out, I brought up an animated map of Hurricane Irma as it closed in on Hillsborough County, looked at the speed of storm travel, and thought to myself, "I'm pretty sure this thing is going to pass over me between midnight and 1am."

I was right, and that's exactly what happened. Midnight came and the wind picked up big time. I then thought, "I think if I make it to 1am, things should get really calm after that." I was mostly right there. The worst was over, but there were still some big gusts of wind flying around. But it was nowhere near as bad as when the eye wall was close.

Things didn't calm down until next morning the 11th, but I was still without power and wouldn't get it back until the 12th at around noon.

I was prepared. Water was bought, food was stocked, flashlights were readied, clothes were all washed and so on before Irma came...

...but those 37 hours without power were totally miserable. The longest I can usually stand going without electricity before it becomes decidedly frustrating is about 6 hours, so to go through 37 was maddening.

I don't own a smartphone so all I had to keep me company was that dinky little radio while I laid on my bed, totally in the dark, waiting for the power to come back on.

This made me realize that yeah, I really need to get a smartphone. It would have made things slightly better.

What kept me from going nuts is knowing that millions of Floridians were going through the exact same thing at the exact same time I was, so there was no reason to get angry about it. Frustrated, yes, but not angry. There's a difference.

Two things sucked more than anything else. Humidity and not being able to shower.

Florida's summer weather doesn't end until around October, so it's still humid. While true everyone got a break from the heat for the fact that Irma really cooled down the air, the humidity was still there. With no A/C or even fans to cool me down, I had a slightly sticky sweat for almost the entire duration of the power outage.

Yes, I had water to wash with and did use it (I used a spray bottle for those interested,) but that's obviously not the same as a good shower. It's the kind of washing that's just adequate at best.

Had I fled, I would have had to drive at least 300 miles north to stay out of harm's way

If I had packed a bag and gone north, the first closest safest territory would have been Alabama...

...but given how wildly Irma was swinging around according to the reports, there was no way to tell where to go that was truly safe. There was even one point where meteorologists were saying that Charlotte NC was going to get hit.

And even if I had gone to Alabama, I still would have had to deal with Irma.

Again, there was no way to truly tell where the safe place was short of driving 500+ miles away.

Things I learned from Irma

While I understand Irma was a monster, not being able to accurately track something that large just doesn't make sense. I don't blame the meteorologists. I blame the systems they use. I'm certain they're already aware that something needs to change where these computerized prediction technologies are concerned.

Governor Rick Scott was totally correct to have Florida take all the preparations it did.

Florida was not overprepared

When traffic lights are out, havoc happens

Imagine a 4-way stop intersection. Now imagine that 4-way stop being 500% larger. Tampa Bay has a lot of those controlled by traffic lights. Those lights weren't working after the power got knocked out. What you're supposed to do when the traffic lights are out is to treat those gigantic intersections like 4-way stops. And that means "first car that arrives is first to leave." Whoever stopped before you goes first.

There were (and will continue to be until all power is restored) more than a few jackasses out there just blowing right through intersections, not stopping at all and doing it without giving a second thought that someone might be coming the other way.

I should own solar charging equipment (especially considering it's cheap)

I should own a solar generator and/or solar bank to power at least one fan and charge my phone. This is something I didn't think about until after Irma. For extended power outages in Florida, it makes total sense to charge battery powered stuff using the sun.

Hurricane Irma was huge. Colossal. Gigantic. But it's very different compared to other types of storms.

Storms I've been through where they were horrible and I very much knew it were Nor'Easters. Those are large New England snowstorms and I've experienced several of them. They are always destructive, always terrible and take a good long time to clear out well after the storm has passed.

Irma, this giant hurricane, only pounded my area of Hillsborough for 1 hour. It came, blew everything around and moved on. What it left behind was a bunch of felled trees, tree debris everywhere and a damaged power grid. And again, it was the aftermath that was worse than the actual storm.

Granted, that 1 hour was scary. Seeing wind like I did for what I could see of it was intense. But the intensity was short and I suppose that's why Irma didn't feel as big as it actually was.

Still, it was a crazy experience.