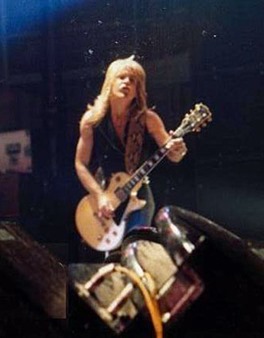 Above is an individual most would consider a rock god of sorts, Randy Rhoads. Was Randy a good player? Yes. But his studio tone was total crap.

This is what Over The Mountain sounds like with just the guitars heard:

Yeah, it sounds awful. The guitars are nothing but a trebly, clacky, nasty mess.

Why do the guitars sound bad on their own? It's not for lack of guitar playing ability, but rather because they were purposely recorded that way.

And why were they purposely recorded that way? Because it worked better for the overall mix of the song. Or at least what the producer at the time thought was the best mix for the song.

There was a period of time between roughly 1975 through 1985 where nobody really knew how to record highly-distorted guitar sounds. The goal was, "make it sound like it does live", and that was not an easy task. In the end, the guys working in the studio simply guessed at what would sound correct. Sometimes it worked while other times it didn't.

For the recordings where the guessing on how to record highly-distorted guitars did work, more often than not the following is true:

Why is the bass cut out?

What's the deal with the doubling up of guitars?

For whatever reason, playing the same thing twice on two separate tracks magically fixes a lot of guitar sound problems. What once was "thin" now sounds "thicker", what once was "flat" is now "more round", and so on.

I can't really explain in words what happens when you double up guitars. What I can say is that a lot of the famous rock songs you know double up the guitars often, and I do suggest trying it for yourself.

The best example I can give of how good the doubling up of guitars can be is to purposely record two tracks of a guitar riff direct. And by direct I mean direct-to-mixer. No amp, no effects. Just the guitar. You'll be amazed at how much better things sound when you have two guitars playing the same thing.

If you want to try that experiment, remember to purposely cut out the bass so things don't get too "thumpy". And yes, that is one of the reasons guys working the mixing board cut bass out of doubled-up guitars.

Do I personally double up guitars and cut the bass on them?

Depends on the song, but most of the time, yes I do. Since I know there will be bass and drums added in later on, I leave those frequencies "open" for those instruments to fill that sonic space up.

And as far as the doubling up of guitars is concerned, I've known that recording trick for years.