No, I didn't do all four things (as in read the book and watched all 3 movies) all at once. The order in which I did it was over a period of a few years.

So yeah, I took a really roundabout way of taking the story in.

I'm going to go on the assumption you've read the book so you know what the story is about. If not, go read it. Seriously.

Anyway, the book, obviously, is the best way to take in the story. But you get mild to wild variations of the same story with each of the three movies.

Starting with Big Brother himself, each of the three films depicts him in a different way. 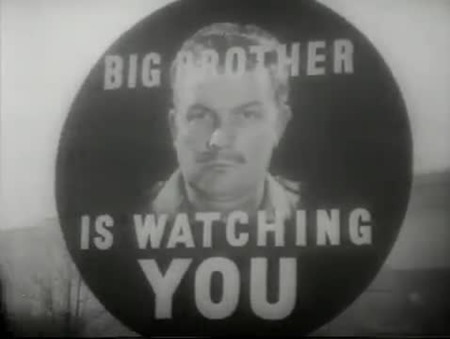 He has a look that does mostly match what the book describes.

In the 1956 movie version, BB has no moustache (which he's supposed to): 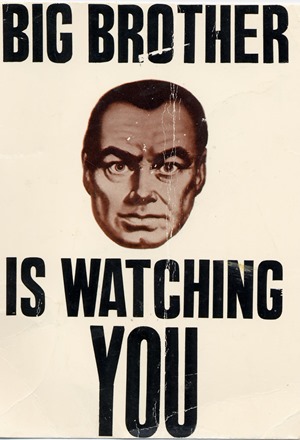 I'm going to say before continuing that the 1956 movie is a really loose adaptation of the book, but anyway, BB has no moustache here and has a cartoony look. 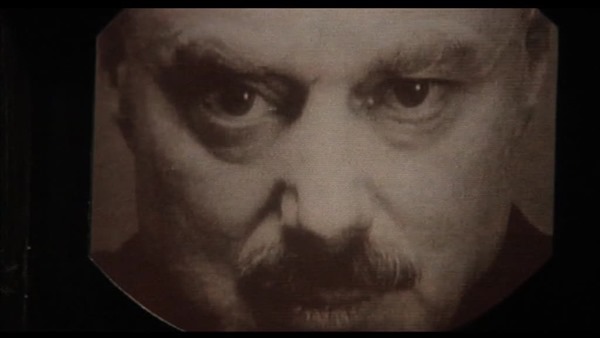 Bob Flag's portrayal of BB is said to be spot-on what the book was trying to describe BB's appearance as. And I'd have to agree with that. In the book, BB's image was described as having eyes that were always looking at you no matter what angle you saw his image from. And they definitely nailed that in the the '84 movie version.

For any kid doing a book report on Nineteen Eighty-Four who cheats by watching any one of the the 3 movies instead of reading the book, he would most certainly get an F because there's simply no way to really get what the story is about without actually reading it.

The '84 version of the movie is the closest to the book, no question. But if you watch it without having read the book first, you'll end up totally confused and have absolutely no clue what's going on. None at all.

The '56 BBC television version doesn't capture the story very well, and takes some liberties, such as by giving Julia a last name, Dixon. Julia never had a last name in the book.

The '56 movie version is way off from the original story. However it is the only one of the 3 you can watch without having read the book and understand the story start to finish.

I do in fact like the '56 movie best just because I think it was very well done for its time. You really get a good sense of panic, fear and helplessness from the characters and moreover understand them and can follow along; it's just good cinema. But I totally admit the story is way, way off.

The '56 BBC version moves along way too fast and is really hard to keep up with. You can definitely tell it was a made-for-TV thing.

While the '84 version is the most true to the book and has the best look of the three, it's like I said, if you didn't read the book first you would have no clue what's going on or why.

For example, the Julia character in the '56 movie is portrayed as a sweet, innocent woman played by Jan Sterling and only barely hints that she ever had any indiscretion. In the '56 BBC show, Julia was played by Yvonne Mitchell and basically had the same sweet/innocent thing going on. Julia is in a fact a total slut who had sex with many men (noted by "hundreds of times" in the book) before meeting Winston, and does what she does because it goes directly against the Party's wishes, and because she just outright likes it. Only in the '84 version where she is played by Suzanna Hamilton do you really get any sense of who she really was. Julia was never supposed to look like this perfect Hollywood starlet, but rather a girl who was decidedly plain who didn't even know how to apply makeup correctly. The '84 version nailed that.

There is one thing the '56 BBC version got totally right, and that's how Winston and Julia are supposed to look at the end of the movie. Both were supposed to look absolutely disheveled after being "cured" by the Ministry of Love, and oh yeah, the BBC version totally got that correct. They also got O'Brien spot-on correct as well.

Why did I take in all these versions of Nineteen Eighty-Four?

Mainly because it's fairly rare to get 4 interpretations of the same story - with all of them different to varying degrees.

And the cool part is that each has a distinct personality all its own, even though it's the same story. None of them are bad.