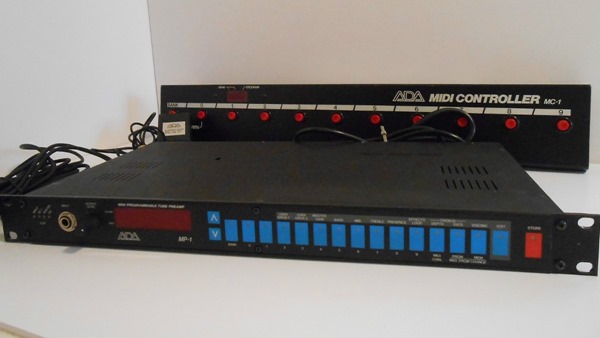 There's some guitar gear out there that many players think have some magical sonic quality to it when in reality there's really nothing magical about it at all. One of these is the ADA MP-1.

The MP-1 is a programmable tube preamp. It has two overdrives, master gain, 3-band EQ (4 if you count "presence"), chorus and like many other rack units of the time has effects loop support.

What made the MP-1 such a big deal back in the 80s? Mainly the fact that for the time it did so much in such a small package (again, for its time), and could be remotely operated by a ginormous foot controller if desired. The way the MP-1 did its thing is via an embedded Zilog Z80 computer processor on the inside.

The only reason anyone wants an MP-1 these days is because they think that because guys like KirkHamster Kirk Hammett and Paul Gilbert used one, they should own one too.

Worth owning? No. Here's why:

Reasons NOT to own an MP-1

There's a lot of modern guitar gear these days that totally smokes anything the MP-1 could ever do - along with adding in the ability to plug in direct (DI) and still sound great which the MP-1 never had.

I suppose there is a bit of cool factor to the MP-1 just from its appearance. Seeing it in a rack with all its blue buttons and large LED display does look neat. But in all honesty, you can get that classic 80s rock sound without the bulk or the noise using other stuff.

In other words, there is nothing the MP-1 does that can't be done and done better (and cheaper) by modern guitar gear. Anything BOSS makes for multi-effects will run circles around the old-and-noisy ADA stuff.