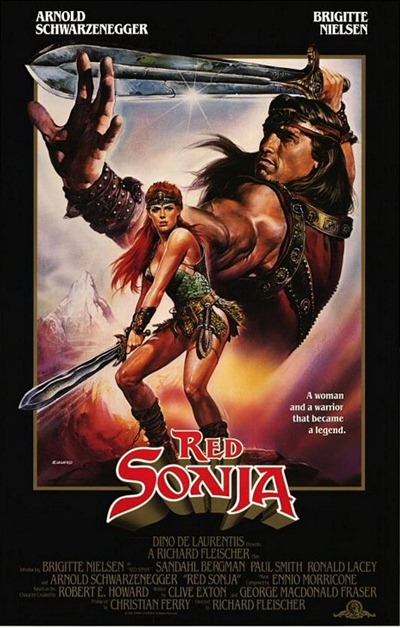 Two films in two days? Sure, why not.

Red Sonja is yet another one of those movies that used to be run by television networks during the summer to fill time before the new shows aired in the fall. For some reason I only caught parts of this movie as a kid and was never able to see the whole thing; it was one of those things you stumbled upon as you were flipping through channels. Nobody ever said, "Oh, cool! Red Sonja is on!" They tuned in, said, "I don't know what this is but Arnold's in it, so I guess it can't be too bad?" Wrong.

This movie sucks. You know this right up front from the fact that Arnold Schwarzenegger, who does not play the lead character, is shown on the poster and on the DVD cover much larger than the true lead played by Brigitte Nielsen. This means the company who made the movie was relying on Arnold's star power to actually sell the film. Not a good sign.

Before getting into the flick, let's talk about Brigitte for a moment. This is her first major movie, and she in all her packed-and-stacked, 22-year-old six-foot-one glory is absolutely smoking hot. However even Brigitte's hotness cannot take away from the fact that this movie is bad.

The best way to describe Red Sonja is that it looks and feels like an Americanized version of a cheesy Kung Fu movie. The dialog is clunky and slow. As for the pace.. well.. there is none. It's dialog, action, then dialog, then action, then dialog, then action, blah blah. You will be able to predict everything that will happen in this movie as you're watching it. Does this mean you have superpowers? No, it just means the story is that bad.

An oddity about Red Sonja is that while it's a 1985 film, it looks like it was made in the 1970s, again in reference to cheesy Kung Fu movies of that era.

I only recommend this flick to those that like bad movies. If you want cheese, Red Sonja is it.