The logo on a guitar's headstock (or pegboard in Fender vernacular) matters to me; these are a few of my favorites and I'll explain why I like them.

This CBS-era Fender logo is without a doubt my absolute favorite out of all Fender logos. In fact, it's my favorite logo period. And yes, it is the same one you see on the Yngwie Malmsteen Strat. I really like the large swooping italicized "STRATOCASTER" and the "WITH SYNCHRONIZED TREMOLO" underneath it. For whatever reason it totally works. It's a "busy" design, to be sure, but it's freakin' awesome.

You can still get the "swoopy" logo today, but the tough part is getting the "WITH SYNCHRONIZED TREMOLO" underneath it. Only the Malmsteen Strat has the complete '69 logo treatment.

ESP has bounced around with a bunch of logos, but this is the best one. Very squared-off, very in-your-face, very bold; it totally works. And I love the fact the middle part of the "E" looks like a speaker cone.

And boy do you have to pay a lot to get this logo on a guitar these days. The ESP "M" series guitars have that old-school logo, and you're going to pay well over a grand to start just to get it.

As far as I'm aware, Jackson has always used the same logo and rarely uses anything else. And fortunately there's a wide selection of Jackson axes from cheap to expensive and everywhere in between, so you can get a guitar with a cool Jackson logo to fit any budget.

I'm very happy Jackson did not do that "premium only" crapola with their branding, because it allows anyone to look cool with one of their guitars. 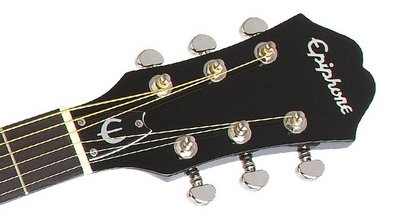 The Epiphone logo itself isn't that interesting, but the "e" logo is. You can see it in the above image on the truss rod cover.

There are only two guitar brands in the world that can be recognized by a single stylized letter. The first is the Fender "F", and the other the Epiphone "e".

I'm actually surprised Gibson doesn't use more of Epiphone's "e" because it can be recognized instantly the moment you see it, and it is distinctive.

The "e" is used mostly on higher-end Epiphone models like the Sheraton where the logo can be seen on the pick guard and the tailpiece.

Were it up to me, every single Epiphone electric should have the "e" on the truss rod cover. The logo isn't tacky, and a small "e" on the cover would be a nice touch. 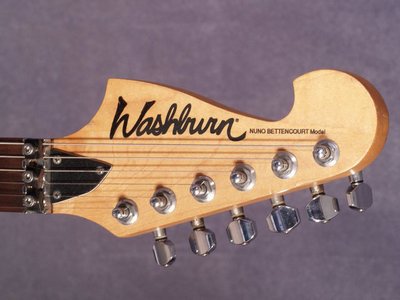 There was a time when Washburn was considered a major player in the electric guitar market. The Nuno Bettencourt model above is, of course, what put Washburn electrics on the map in the rock world.

The way Washburn did the logo for the Nuno model (which is still sold today) works very well. It's a nice combo of vintage+modern and does look best when applied as black-on-natural.