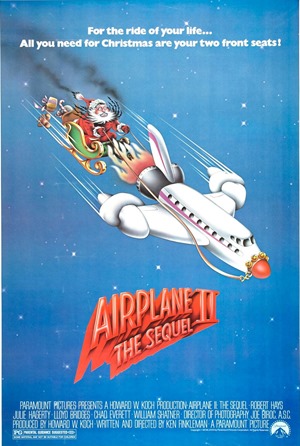 On Netflix, Airplane! and Airplane II: The Sequel are there at the moment. This is about the second movie.

For a long while I've known that the original writers of the first movie, that being Jerry Zucker, David Zucker and Jim Abrahams, had absolutely nothing to do with the second movie. And as far as I know, none of them have even seen it because they positively refused to even give it a look. If I remember correctly, I believe the Zucker brothers said in an interview that they knew right up front the second movie would be a total piece of crap and refused to make it. But the studio went behind their backs and made the movie anyway. That ticked them off, and rightly so.

The first movie, Airplane!, is a total comic masterpiece. Truly. That movie was made in 1980 so it's a 34-year-old flick. However, it was written so well and the timing and gags are so good that it's still funny even today.

As for Airplane II: The Sequel... not so much.

Like I said, the movie is on Netflix right now, so I re-watched it. I think the last time I actually sat through this whole movie was probably either in my early 20s or even my teens. Yeah, it's been that long.

Here's the interesting thing this time around. It's my first time viewing the movie fully uncensored. Every time I've seen this movie in the past, it was always the "edited for television" version.

So what do you get in the uncensored version? You see some breasts, hear some mild cussing, and see the Elaine character smoking weed. 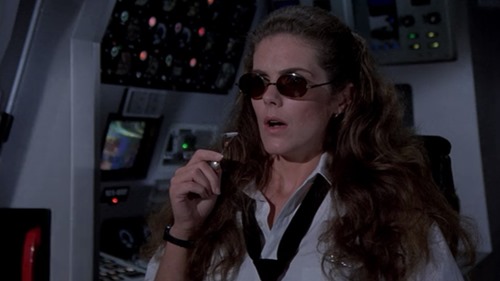 You would have to be high to be able to laugh at this movie because it's just bad. While the first movie was great, this one just tries way too hard to be funny. There's a lot of forced humor going on.

Some parts of the second movie are funny, but not many. You'll laugh a little bit here and there, but it's nowhere near as good as the first one.

The biggest problem with the second movie other than the forced humor is that it's so woefully dated. What the writers decided to do was shove in any popular culture reference they could at the time the movie was made, which was 1982. Nobody under the age of 35 would be able to catch all the references, so most of the time it just doesn't work.

I'm 38, and even I didn't know all the references. The one I didn't know was that the main theme music used in the movie is from Battlestar Galactica (1978). I only found that out now just by seeing the reference in the end credits. I never watched that show, which is why I didn't know it before.

The film was made simply to cash in on the hit that the original Airplane! was. The script was probably rushed together, and the writers not only rehashed but outright copied jokes right out of the first movie, did it often, and did it badly.

Obviously, I didn't see this movie originally when new in the theaters because I was only 7 years old in '82. Instead I saw it on television years later as one of those summer runs that networks used to push out when the regular television seasons were over.

My kid self thought this movie was funny. My adult self barely finds the movie funny at all, and it's probably the last time I'll ever watch it.