So I cracked a hubcap 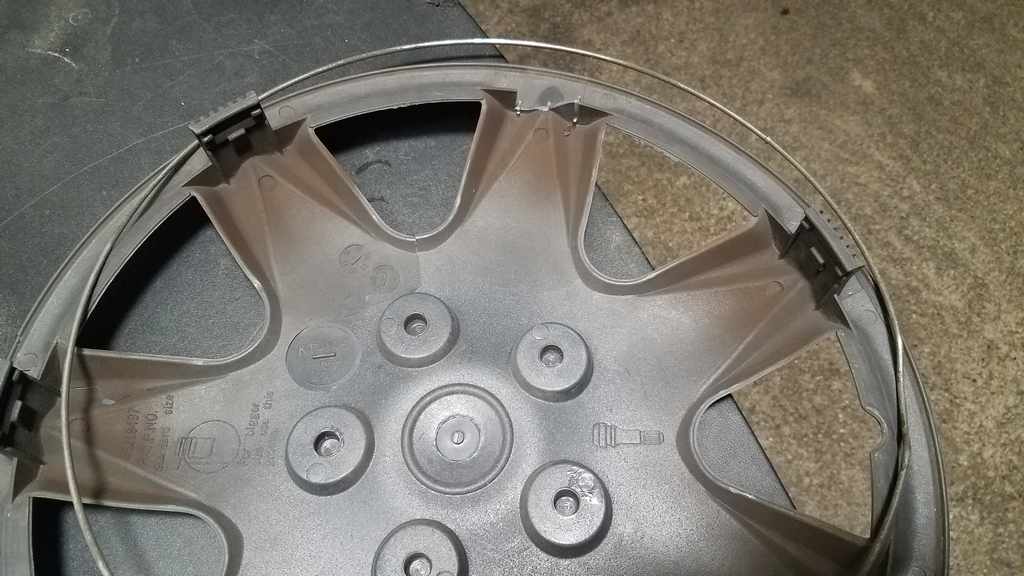 Yes, I know the proper name for these things are wheel covers, but I still call them hubcaps. Amazon agrees with me on this one.

The current car I drive is over 10 years old. I bought it used and it came with a set of cheap hubcaps. Some months back, one of them developed a crack. When I spotted this, I thought okay, this will probably last maybe six more months and then the thing is going to break apart.

Recently, I had to pull off the hubcaps so I could adjust tire pressure, which went okay. But when putting the hubcaps back on, -CRACK-, that's when that one hubcap gave up the ghost. The aftermath is seen in the above photo. One of the tabs broke right off and there was no saving it.

Hubcap sets are fortunately cheap, but what a needless expense it is. The only reason I don't drive with just steel wheels showing is because they have surface rust. That rust is totally normal and doesn't hurt anything, but it looks bad, so yeah I will pony up the cash to buy a new set of 4.

Things I've learned from driving a car that has hubcaps

I've owned my fair share of cars, but what I'm driving now is only the third car to ever have hubcaps on it. The first one was a crappy '87 Chevy S-10 pickup, and the second the terrible Versa. My current car is a similar size to what the Versa was (meaning small).

The best bit of information I can give you is that if you have a car with hubcaps on it, ALWAYS take them off before having any tire service performed. Put the hubcaps in the trunk or leave them at home, because if you don't, they will be damaged.

Here are two small stories of what can happen if you leave your hubcaps on when you bring in your car for tire service. One involves me directly and the other is something I witnessed.

When I had the Versa, I brought it into a shop for new tires. The tires were installed and everything seemed to be fine. When I drove the car home, there were no problems... until I looked at one of the rear wheels. A nice big fresh scrape was on the hubcap. I didn't hit anything on the way home, so right then and there I knew the mechanic did that. I also knew there was nothing I could do about it. The damage was there, I couldn't prove the garage did it even though I knew they did, and that's when I learned always to remove hubcaps before going to get tire service.

Fast-forward some time later to the car I have now. Every single time I've ever gone in for tire service, those hubcaps come off first. The time comes due for tire rotation, so I make an appointment at the garage. The day of the appointment, the hubcaps come off and I go to get the service done. This particular garage is the type that only does tires and nothing else. In the waiting area are big windows where you can see all the garage bays with employees working on the cars.

I saw something that just floored me.

A Honda sedan is pulled in. Newer one. The type with hubcaps that will cost you a bare minimum of $80 or even $150+ to replace. Maybe even more. The owner obviously took care of his car because it looked really nice. Well, one part wasn't so nice when the mechanic was done with it. The car is lifted, he yanks off the first hubcap and then proceeds to toss it on the ground face DOWN right on the concrete, scratching it all up. He did this in plain sight and didn't even care.

I want to make it very clear: He did not properly place the hubcap down. Oh, no. He just tossed it.

My hubcaps are cheap crap, but if I saw a mechanic do that to my car, let's just say some yelling would be involved.

When I saw that happen, I just sat in silence, thinking "Yep. That right there is why I take the hubcaps off my car before any mechanic touches my tires."

If a hubcap is going to break, it's better if YOU break it

I broke my hubcap. My fault. The one I expected to break did break, I knew it was coming, so it didn't upset me when it finally broke.

The fact I broke the hubcap actually feels much better than having a mechanic break it. You pay the mechanic to fix things and not break them. Having a mechanic damage or outright break a hubcap is really insulting, especially since that type of damage can be avoided so easily.

When you damage or break a hubcap, at least it's "free damage". That may not sound like it makes sense, but believe me, it does.

Later this week I'll be buying new cheap hubcaps for my small car.