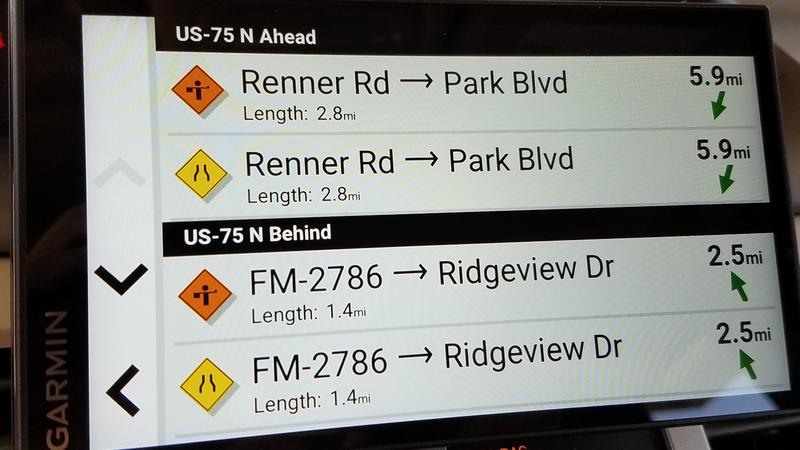 I've been living with my Garmin DriveSmart 66 for a month now. The traffic reporting it has is great, but do I really need it?

Whether the traffic reporting is useful or not depends on where you are, what roads you drive on regularly and what traffic coverage is available to you.

Firstly, I should note there are two ways the DriveSmart 66 can get traffic data. The first is by use of a Bluetooth-connected smartphone using the Garmin Drive app, and the second being the no-smartphone method of FM-received traffic data. I use the second way, as I do live within one of the major metros in the United States that has coverage. There is no setup involved getting traffic data the FM way. If there is a traffic FM signal available, the DS66 will pick it up usually within a minute or two after power-on. I've actually been using FM traffic for years. More on that in a moment.

Secondly, yes the DS66 will route you around traffic if you have the option set to do so.

Were I living in New England (northeast USA,) it's probably true I wouldn't need traffic coverage at all. Maybe if I traveled to Hartford CT, Boston MA or Providence RI regularly, sure, I could see the need for traffic avoidance. Using Connecticut as the example, there are some parts of I-84 and I-91 in the Hartford area that can get particularly nasty. Or, if I routinely traveled the southwestern coastline of CT on I-95, yeah, that can get clogged up with traffic as well. But for literally anywhere else in the state, traffic reporting isn't needed (I highly doubt there are many traffic jams in Salisbury CT.)

For where I'm living now in a major southern metro, the traffic reporting is definitely more useful. But it's not perfect.

I started using FM traffic some years back and stumbled upon it by chance. I have many Garmin GPSes in my collection (more than I care to admit,) and a used one I bought arrived with a traffic charger, the GTM35, which is the previous version of the GTM36. I tried it, it worked on the model I was using at the time, and I've been using a Garmin with traffic reporting ever since.

The majority of the traffic reporting is for highways and interstates. After that, some "major roads" are included, which basically means large multi-lane roads that command a lot of traffic but aren't necessarily highways. For all smaller roads (residential and otherwise,) there isn't any traffic data there, and that's okay.

How useful has the traffic reporting been?

The best way I can describe the usefulness of traffic reporting with navigation is that it's like having a specialty tool. Most of the time when you're working on things, you never need the tool. But for those few instances where you do need it, you're very glad it's in your toolbox.

What I like best about the way the DS66 handles traffic is that it can be used without thinking about it. I have mine set up to "automatic" everything as much as it can, meaning I don't have to adjust anything just to use the feature.

Does the traffic avoidance always work? No, because there isn't any traffic avoidance system that can avoid 100% of traffic 100% of the time. But I can say it has worked well for the most part. The only times it outright hasn't worked are for certain construction zones, and that's not the fault of the DS66 but rather the construction crews that didn't report what they were doing in a timely fashion.

Could I go back to no-traffic-reporting navigation?

Yes - but that's a conditional yes.

The condition is that I'd have to do some map study so I would know ways to get around the high-traffic areas. It is absolutely true that the easiest way to avoid traffic is to simply use roads most people don't use.

Example 1: If there's a major road that gets jammed up with traffic often, I'll look to see if a residential area is nearby that I can pass through to simply go around it.

Example 2: If a particular highway exit ramp gets backed up with cars routinely, I'll take the next or previous exit instead. In many instances, this only adds one to two minutes of travel time.

Example 3: I compare how long it takes to get somewhere highway vs. no-highway. If the no-highway route only adds a few minutes and there aren't too many additional stops or traffic lights, I'll use that instead.

From 2005 all the way to 2019, I never used traffic reporting with my GPS navigation, so the fact I use it now is a relatively recent thing.

Nice to have? Yes. Required to have? No. But again, it's like having that specialty tool where when needed, you're glad it's there.