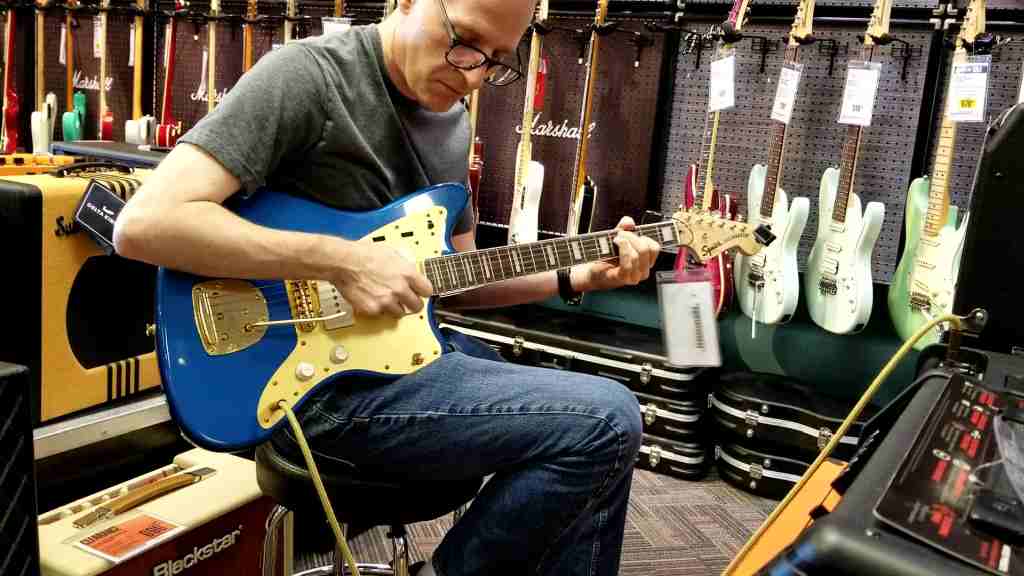 Is this a classic, or is it tacky? Let's talk about that.

The Squier 40th Anniversary Jazzmaster Gold Edition (see current listings) is available in Lake Placid Blue and Olympic White. The one I tried out is, obviously, blue.

Before getting into the appearance, some guitar stuff first.

The weight is good and not too heavy. Pickups sound great and there are no issues there. The neck felt good, tuners were decent, the traditional Jazzmaster electronics all worked fine. Basically put, this is a proper Jazzmaster guitar.

Is the pick guard a true anodized gold type? Yes, it is. It's not a "pretending to be anodized gold" guard. You get the real deal here.

Does the vibrato system have a locking switch? Typical to Squier, it does not. If you want that vibrato lock, you will have to step up to the Fender Vintera '60s Jazzmaster or Fender American Original '60s Jazzmaster.

Now as for the appearance of the Squier...

I honestly can't decide whether this guitar looks good or not. Blue does work with gold, and that anodized pick guard does in fact help out with eliminating some of the single-coil hum. But my brain flip-flops whenever I look at this guitar. Sometimes I think it's beautiful, and other times not.

To my eye, where the tacky happens is at the vibrato plate. I have no issue with the rest of the guitar's appearance except right there. That gold is not the same color as the pick guard gold and I just can't un-see that. Also, the guard has a brushed look while the vibrato plate is polished smooth, further mismatching them.

The guitar is great, but staying within the same brand, the Squier Classic Vibe '60s Jazzmaster is a much better looking guitar - which by the way is also offered in a lefty, something not offered for the 40th anniversary model.