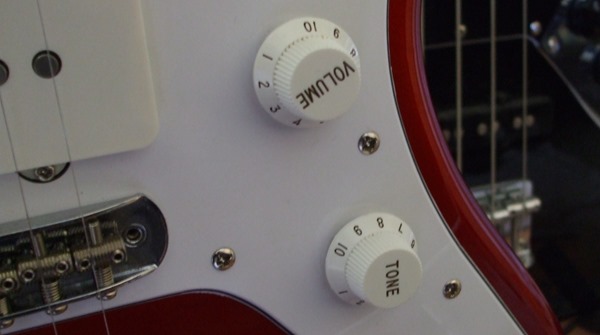 My Squier Jazzmaster developed an electronics problem. The volume pot developed a nasty dead spot around a 3/4 turn, and the tone pot was getting a bit scratchy.

I'm not a guy who knows how to work on electronics when it comes to guitars. Or to be more accurate, I can work on them, but for anything outside of a normal setup or a simple soldering job, I'm not that good at it.

Stratocaster and Telecaster wiring is easy. Jazzmaster and Jaguar wiring on the other hand is a bit more complicated. Not insanely complicated, but I'm not familiar with it.

Fortunately, I know people that know how to work on guitars and now my Jazzmaster is all fixed up and slightly upgraded, so here's the story on that, along with a fair amount of guitar tech-talk.

Traditional Jazzmaster and Jaguar wiring uses potentiometers that are totally different from other Fender or Fender-style guitars.

The vast majority of Strats and Teles use 250K audio taper pots.

Jazzmaster and Jaguar electronics however use a 1meg linear taper for the volume pot and a 1meg audio taper pot for the tone control. I'm specifically talking about the lower lead circuit controls here and not the upper controls on the top horn.

In basic terms, what this means is that the volume pot has a fast cutoff while the tone pot has a more gradual cutoff.

Here's the bogey, however: While I was pretty sure the Squier Jazzmaster uses 1meg pots (the sound the guitar produces makes that fairly obvious), I had no idea whether it was using the traditional linear-volume/audio-tone pots or if they switched it up and did audio-volume/audio-tone.

I took a guess that it uses linear-volume/audio-tone. Fortunately, I was right because the resistance curve of the pots when in use still sounds the same as before.

Actually, that's not true. It sounds slightly different now, but for other reasons that I will mention right... now. 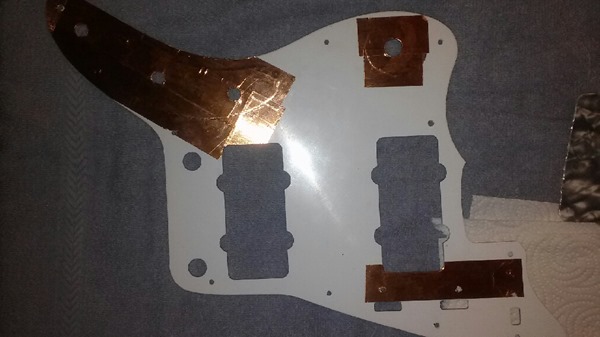 Under the pick guard, the wiring was redone to be more of the traditional Jazzmaster style.

In addition to the replacement pots, copper shielding was installed, and a good amount of re-soldering was done because of Squier's "glob o' solder" way of doing things.

I provided the tech an electrical diagram of a Jazzmaster. When the guitar was finished, he said Squier mostly followed the original specs, but there were a few things that were done by the factory as cost-cutter measures. All of those cost-cutter things were found and attended to appropriately. As of now, my Jazzmaster is more true to original mid-1960's electronics spec.

The only stuff changed out were the lead circuit pots and a few wires. No other mods present other than the shielding, which really doesn't count as a mod.

How does it sound now?

The signal path has definitely cleaned up quite a bit. And since it now has proper grade pots in it, the treble increased to the point where it "screeches" a bit on 10. However, that is what traditional Jazzmaster wiring is supposed to sound like; this is commonly known as an "ice pick" sound. I'm okay with this, because turning the volume down a little cures that easily, being the volume pot is linear.

Also, the front (neck) pickup has more output to it now. Because of that, it's now louder in a good way. The rhythm circuit also has a little more treble response to it.

The immediate improvement I have is with the volume pot. I can now make very small adjustments when I want to whereas I couldn't before. It's nice having a good, proper linear volume pot on my Jazz.

The '93 USA Strat makes its contribution

I bought some Gibson "witch hat" style knobs for my Jazz. However, they don't fit on the new potentiometer posts, nor do my old Squier knobs fit on them either.

The knobs you see in the photo at the top of this article are from my '93 USA Stratocaster. Yes, I have 21-year-old knobs on my Jazz now. I cleaned them up as best I could since they were a bit dingy, and they have natural staining from being as old as they are. But the dirt-yellow (colored that way from age) lettering on the knobs does fit the look of the guitar quite well.

Why wouldn't the old knobs fit?

Replacement pots use American-spec post thickness, so they're slightly wider than Asian-spec.

From a distance, it looks like nothing was done, but a lot was done

Ordinarily, when a guitar player hears "modded guitar", he thinks that some major thing was done to the instrument that physically alters its appearance. That's not the case with my Jazz. It looks like any other Squier Jazz, save for the fact that what's under the pick guard has been significantly cleaned up along with the installation of new lead circuit pots.

The mods done may not be anything major, but I have a guitar that works 100% again, so I guess this could be considered a repair + upgrade + minor mod.