The "witch hat" knobs arrive for the Jazzmaster 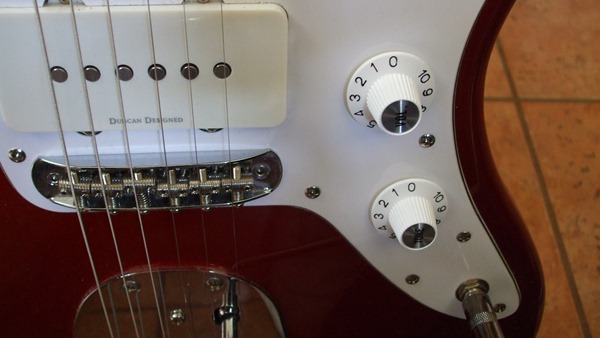 Above is my Jazzmaster with the new Gibson knobs on it. While they were a tight fit, they did fit correctly on the split-shaft potentiometer posts.

For those that haven't read my previous post about this, no, they're not 100% correct...

I found this image of a new '65 AV Jazz and the knob numbers are facing in: 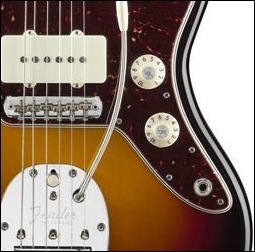 ...while on others they face out like they're supposed to: 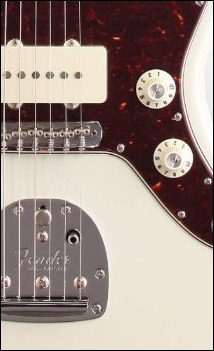 ...and the font is different, too!

Well, that's a collector item right there. If the numbers on the knobs face in, that's the goof and oh yes, that's an instant collectible because the knobs are not supposed to be that way.

It's weird that in 2014 that Fender would have a goof like this, but then again it's really easy to miss, because who pays attention to the orientation of the numbers on a knob? It's most likely the case they got a batch of wrong knobs, decided to use them anyway since they were already paid for, then when that ran out they switched over to the correct ones.

Well anyway, back to the knobs I got.

The color of them is stark white, and I'm debating whether to darken these with coffee or not, because in all honesty, the stark white knobs really look pretty good on the Jazzmaster. I may opt to keep them as-is. Or if I do darken them, I'm not using coffee but rather tea, and a weak tea at that, because it would be too easy to darken the knobs too much.

But anyway, from a distance they totally look like the same knobs on the American Vintage '65 Jazzmaster. Only someone who really, really knows Jazzmasters would be able to spot that they're not accurate to what Jazz controls are supposed to be, appearance-wise.

The thing that makes the knobs a dead giveaway that they're not Fender is the fact they have a zero on them. I've never seen a Fender that had a zero indicator on it as they always start with 1.

Big knobs go well with the Jazz design, but on the Strat, the smaller knobs totally work, and I can say in all honesty that putting the bigger witch hat knobs would not work there.

And yeah, I know, the Blacktop Series Strats all have those bigger skirted amp knobs on them, and this is a look I never agreed with. But then again, all the knobs are black, which is why I think they're called blacktop in the first place. If there was a white or parchment option, that would look a whole lot better.

On the Jazz, the overall look with the white witch hat knobs makes for a much more classy appearance, mainly due to the shiny silver part on top of the knob. The silver part makes the controls look likes ones you'd find on a hi-fi stereo from decades ago, and that's not a bad thing. Not at all.

I'm happy with what I received. The knob set adds a little extra flair without being too overbearing, which is what I was looking for.