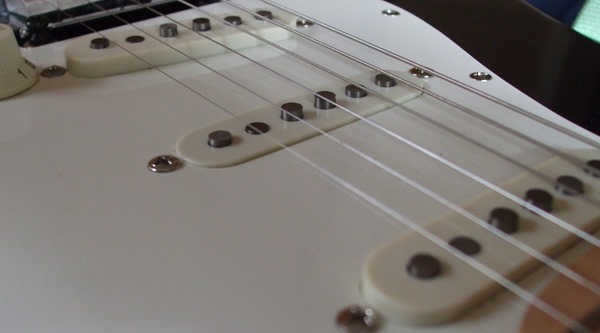 Do I like it? I'm not sure just yet, and you'll understand why in a moment.

The condition of the guitar is quite good. On a few minor tiny scratches here and there. The metallic black is actually a lot better than I thought it was going to be, as it has just enough metal flake in it to hide scratches, but from a distance it does not sparkle, and that's a good thing because I don't like sparkly finishes on guitars.

Electronics all work but the pots are stiff. The turning motion is fine, but you do have to put effort into it. It reminds me of the 4-knob layout on a Telecaster Custom I played a few months back as that had stiff knobs on it too.

The neck had obviously never been set up right and needed three 1/8th tightening turns on the truss rod because it had a rather large bow to it. It's a little buzzy at the moment but I'm sure it will settle properly over the next day or so. If it doesn't, I'll have to take it back. But I'm confident the neck will get back its proper shape.

Tuners are good, nut is cut a little bit off and sticks out on the edges slightly (Mexican Strats are usually the same way so no surprise there), but I can work with it assuming the neck bends back proper. And if I find the nut sticking out a little really bothers me, it's easy enough to shave down gently with a file. No big deal.

The most noticeable thing about this Strat is its sound. Very, very glassy. I put a picture of the pickup poles above on purpose because they're identical to the pole positions on an American Standard: 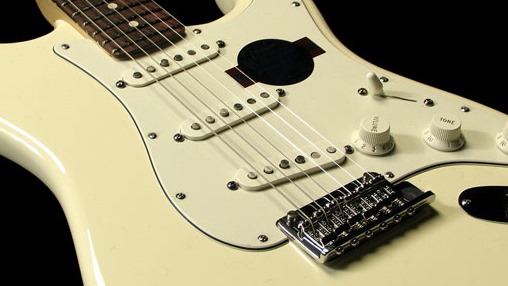 A low-mounted treble E, totally sunk in B, high G, high D, low-mounted A and low-mounted bass E. That's the vintage pole positioning setup, and that's exactly what the Squier Standard has.

The alnico pickup magnets along with the pole positioning gives the Squier some serious vintage-style voicing to it.

Does this mean the Squier Standard is actually voiced more like an American model than the Mexican Standard is? Yes. Funny how things work like that.

Where the vintage-style pole positioning matters most is in the "quack" 2 and 4 pickup selector positions. The Squier Standard has total vintage Strat voicing, no question about it.

And yeah, that means the 1, 3 and 5 positions are very "spanky", which is what vintage Strat voicing is supposed to sound like.

In other words, no need to replace pickups at all. When most Strat guys go to do a pickup upgrade, they usually go for the alnico magnet pickups. Not necessary in the Squier Standard since it already has them in stock form.

Concerning intonation, yes the guitar was able to be intonated properly. The only string that was out was the treble E, but a few quick turns of the saddle screw fixed that easily.

The pick guard is actually not white but rather something called "parchment". I knew this before buying it and wasn't sure if I was going to like the look of that or not. I find I do like it because a stark white pick guard on a black guitar is just has way too much contrast even with the one-piece maple neck.

Here's a photo of me holding the guitar so you can see the whole thing. It's as flat of a photo as I can take and I believe shows a good color representation of the pick guard. 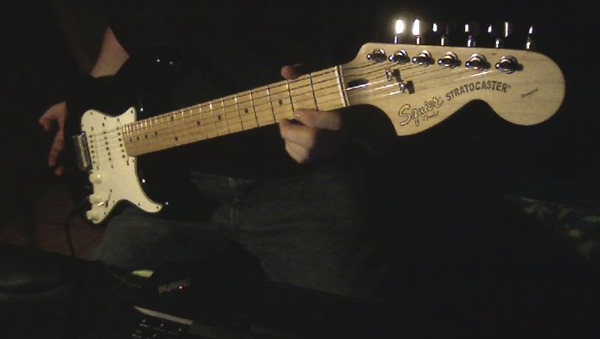 The build year, in case you're wondering, is 2007. I did not know this before buying it. All that I knew of the guitar was from a blurry photo on used.guitarcenter.com. The fact it's an '07 does not bother me, because in all honesty, the guitar is barely used. Also, it's an Indonesian build and not Chinese.

I only had three surprises with this guitar.

First, I was a bit surprised to find out this guitar has a slim-style zinc tremolo block and not the full block. It's not that I use the tremolo at all so it's not a big deal, but on a model labeled "Standard", I did expect a full-size block.

Second, I discovered there were only two tremolo claw springs and not the standard three. The guy who traded it in probably just forgot to put back the third one. I was okay with this since I have two spares and used one of them so I could do my preferred chicken foot spring configuration.

I could tell the two existing springs were original because they have a hint of tarnishing on them, which is par for the course for a guitar that's six years old where the springs are never touched.

The third thing is a pleasant surprise. This is the first two-point tremolo system that I've actually been able to set correct and get proper intonation on. And yeah, this takes a bit of explanation.

Generally speaking, I do not like two-point Fender Strat bridges because I am never able to get the strings set up where they don't buzz and have no intonation issues at the bridge saddle.

Older style six-screw bridges are for all intents and purposes "bulletproof", meaning when you "deck" the bridge by tightening the tremolo claw screws on the back so the bridge doesn't move and use block saddles for extra string height on the top side (which for me I need with a decked bridge), that's a Strat setup that gives you good string tension, no buzz (or very little), and when you set your intonation, it stays set unless you do some major change like switch string gauges or something like that.

On the Squier Standard, its two-point bridge works like it's supposed to. I'm actually quite amazed at this. It is decked, has its intonation set and, well, it actually works. This is the first time out of all my years playing both Fender and Squier Strats that I've been able to get a two-point set up to do what I wanted it to do.

Why does this particular one work? It could be those great full-block saddles, or maybe the smaller tremolo block has something to do with it, or maybe the fact the bridge is a foreign build (meaning slightly different measurements). I'm just not sure. All I know is that it works, and I'm happy about that.

Something I read on Fender's own web site is that the Standard is supposed to have a slim neck, so I expected something, well.. slim. As I discovered, it's actually thicker than the Bullet Strat neck. This either means the Bullet neck is a "super slim", or the Standard's neck is not as thin as Fender says it is. It's not a big deal but I feel it's worth mentioning.

Lastly, at least for the moment, I'm going to talk about the look of the guitar.

Being this guitar is six years old, its maple board is not super-light colored but rather slightly yellowed from age. The Standard has no neck tinting on it whatsoever, which I consider a good thing. But the one I have in particular has the 'bonus', if you will, of being six years old and having a slight natural yellowing to it instead of it being fake.

This is the second big-headstock Squier I've owned. The first was the Vintage Modified Stratocaster, which of course has the tinted neck and glossy-glossy coating all over the headstock and back of the neck, while the Standard is just regular non-gloss polyurethane.

The way the Standard has its headstock shape and logo done is 99% correct. The only part of it that's not correct is the little "Standard Series" at the end. But fortunately that can be scratched off easily. If I keep the guitar, I may scratch that part of the logo off.

Why does the Standard with the one-piece maple neck nail it so good when it comes to the headstock look? It's because the Squier logo is unapologetically large, in gold with black outline, the "STRATOCASTER" is also unapologetically large and in charge, but what adds to the look at the tuners with the nuts on top and the two string trees. This "fills the area" of the headstock and doesn't make it look like just a big unfinished hunk of wood on the end of the neck. Everything about it (with except of that little "Standard Series" crapola) is spot-on.

The three-ply parchment color guitar with the powder coated (or what appear to be powder coated) non-shiny bridge saddles with black screws make for a very classy-looking Strat. And it works very well in metallic black. A lot better than I thought it would.

I consider the Squier Standard with the one-piece maple neck to be a very classy-looking axe. And it certainly has the hardware to sound as good as it looks.

Should the neck bow back proper, this could be my new favorite guitar very quickly. 🙂