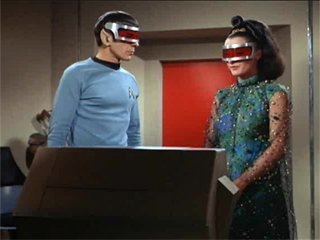 For those not familiar with common Star Trek abbreviations, TOS means The Original Series, TNG is The Next Generation, DS9 is Deep Space Nine, VOY is Voyager, and I believe Enterprise is either ENT or STE (for "Star Trek: Enterprise").

TOS was the absolute last Star Trek I ever watched in its near-entirety. And I'll explain what I mean by near-entirety in a moment.

The first 'Trek I ever got heavily into was TNG. That's my 'Trek. In my opinion it's the best one out of all the 'Trek franchises. It had a fantastic beginning, a great run and arguably the best final episode out of all of them. The whole thing was done very well.

I have watched all of DS9. Very good all around and much better characters. The only problem is that it turned into a bit of a soap opera after a while. But it did have the absolute best space battle scenes out of any 'Trek television series.

I have also watched all of VOY and STE. They both sucked. In VOY there's maybe a few episodes that are good but the bulk of it is just plain bad and you just don't buy what's going on most of the time. STE was a colossal failure. A lot of people expected this to be the next TNG. It wasn't. Instead it was just a whole lot of nostalgic schlock mixed in with bad characters - save for one - Thy'lek Shran. That character is so awesome I can't even begin to describe how cool he is. If you were to watch only the STE episodes featuring this character, you'd love the show; he's that good.

Okay so anyway back to TOS.

I skipped several episodes based on the Netflix description of them alone. One thing that every single 'Trek television series has done are the dreaded "back to Earth" episodes.

The only reason back-to-Earth episodes were made was to save money. That's it. It is far cheaper and easier to film an episode using regular sets in regular locations periodically than to fabricate everything to be space-looking all the time. So whenever a back-to-Earth thing happens, it was done solely to save cash and that's an absolute truth.

The reason anyone watches 'Trek is to see stuff in space. Yes, the crew often beams down to other planets to check out other stuff, but the point is it's not Earth, so at least the idea is upheld that you're watching the crew do stuff on some distant not-of-this-Earth location.

TOS fortunately did not have that many back-to-Earth episodes, although there is one that was so obviously done to save cash it isn't even funny - Spectre of the Gun. Almost the entire episode was shot on a very small set with half-built crappy Old West scenery, and the reason given in the story for the crappy set is that aliens built it that way. Seriously. This episode has such bad production that you can actually see the shadows of the actors from the "lightning" on the studio walls. They didn't even TRY to hide it. Pathetic.

Another back-to-Earth that I watched the first 5 minutes of and then skipped the rest was A Piece of the Action. Mob-style thing. Stupid. Skipped. TNG did this too with The Big Goodbye.

So anyway, any back-to-Earth episodes I either muddled through or just skipped over completely.

Season 1 of TOS is the best of the 3 seasons. You will find almost all the classic 'Trek moments in those 29 episodes plus the 2 pilot episodes. There are no episodes in season 1 you need to skip. If I had to pick a favorite, it would probably be Balance of Terror. The story in that one is spot-on, the ending very good and I got a genuine feeling of, "Geez, I hope these guys don't get caught by the Romulans" when watching it, so there was some genuinely good tension.

In season 2, the biggies worth watching are Amok Time, The Doomsday Machine, I, Mudd and The Trouble With Tribbles.

In season 3, the good ones are Is There in Truth No Beauty?, Day of the Dove, For the World is Hollow and I Have Touched the Sky, The Tholian Web, Wink of an Eye, Whom Gods Destroy, Let That Be Your Last Battlefield, The Mark of Gideon, The Lights of Zetar, and All Our Yesterdays.

A character that TOS should have used WAY more is Harry Mudd. He was only seen in two episodes, Mudd's Women and I, Mudd mentioned above, but what a character. He's just flat-out entertaining and very memorable. I am 100% sure that TNG's Q character was based off Mudd's persona or at least served as a huge inspiration.

Nobody has any clue what's going on at Starfleet

The Starfleet organization, the UFP (United Federation of Planets) or whatever it's called is barely mentioned in TOS. And when it is mentioned, its role is just plain weird because half the time you don't even know what their purpose is.

In TNG, it is very clearly defined what Starfleet is, its purpose and how it goes about doing things. Not so in TOS. At best you're just given little bits and pieces of information that really don't amount to much. In fact there are a few instances where Kirk and Spock bitch about how Starfleet has no idea what the hell they're doing and should just butt out of everyone's business - yet this is the organization they work for.

In contrast, in TNG you actually see the crew of the Enterprise working with Starfleet to actually get things done, so they're not just this distant disconnected government-type thing in the background as portrayed in TOS.

I'm pretty sure Starfleet had a weird role in TOS only because the writers at the time had no clue what the organization was supposed to represent.

Would I watch it again?

I watched TOS because heck, I'd seen all the other 'Trek shows and it was there on Netflix, but I can't say I'd watch it again. All I see for the most part is 1960s sci-fi on a shoestring budget even with the computer enhancements of the remastered versions. The show also aired before my time so I don't get any "remember when" value out of it either.

I've said this before, but TOS is good for what it is. The makers of the show did the best they could with what they had. Many of the stories told were pretty good. Care was taken for the most part not to have any plot holes (except for the whole Starfleet thing) since the story was the only thing really driving the series.

The big thing for me is this however: With TNG, I get the sense I'm watching a real crew navigating a real ship in real space and having real adventures. With TOS I don't get that, and that's pretty much the downer for me. Yeah, I totally understand TOS isn't anywhere near the production quality of 2001: A Space Odyssey (1968), but I just hate the "I know this is a set built on a cheap budget" feeling, and that's ultimately what bugs me about TOS the most, and is also why I won't be re-watching it.