Can a Telecaster surf?

This is a question I got asked on YouTube that does need an article to answer it.

I was specifically asked if the Telecaster (the one above is the Squier FSR Tele I own) would work for surf rock music. My answer is that a Tele is a good choice for surf but not necessarily the best choice when trying to achieve "that surf sound."

A quick history of surf rock and Fender electric guitars

The original surf guitars are all Fenders. Stratocaster, Jazzmaster and Jaguar, in that order.

Dick Dale plays Strats and always has. He was the first guy to a surf rock hit with Let's Go Trippin'. The Stratocaster was originally introduced in 1954.

After the success of that song, other artists started playing surf and picked up the Jazzmaster guitar. Guitar players of the era totally rejected that guitar as a jazz instrument but found it worked very well for that bright, jangly surf tone. The Jazzmaster was originally introduced in 1958.

The Jaguar, introduced in 1962, was specifically built for surf rock, which is why original models included a flip-up foam mute to specifically get that surf rock "drip" tone: 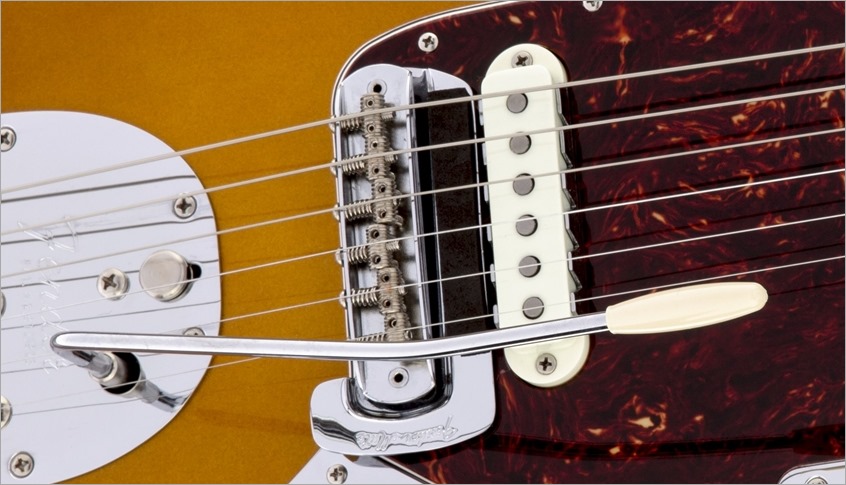 If you really want that flip-up mute badly enough, yes you can still get it on the Fender American Vintage '65 Jaguar. At the time of this writing, that Jag is the most expensive production electric Fender builds that isn't a special model. Why? Because there's a fair amount of stuff that only this Jag has which isn't shared with any other Fender electric. I'm honestly surprised Fender even has this as a production electric and not a Fender-Custom-Shop-only model given how very specific the build is...

...but do you actually need that foam mute for surf rock? Absolutely not. Whether you own an original Jag from the '60s or a new American Vintage build that has the same hardware, Jag players universally agree that the mute is pretty much worthless. It looks cool, but when in use it adds pressure to the strings that pitches up the tuning of the guitar, so you can't switch back and forth from song to song and keep the same tuning. Also, being the mute is foam, it will dent, get gummed up with gunk fairly quickly and will need to be replaced every few years.

Was the Telecaster ever used on a surf rock hit song?

Nobody ever recorded a surf rock hit using a Telecaster that I know of. While true from 1952 to 1967 there was "dark circuit" a.k.a. "blackguard" wiring in all Telecasters, you could still totally get surf tone out of the Tele.

My best guess as to why Telecasters weren't used in surf rock more is simply because Fender had intended to outright replace the Tele with newer guitar models at the time surf rock was popular. They were really pushing newer guitar models during surf rock's heyday. Also, the Strat, Jazz and Jags just had sexier, more modernized shapes compared to the Tele.

How do you make a Tele surf?

In my experience, this is how you get specific Fender or Squier guitar models to get a surf tone:

Needed for all models

An amp with real spring reverb, or a digital effect that does emulated spring verb well. My DigiTech RP360 does a very convincing spring reverb and even includes the "tank ping" noise. Another very good spring reverb emulator is the BOSS FRV-1 pedal.

I strongly recommend using a compressor to bring up the note attack that "pings" the reverb so you get that surf rock "drip" tone. Any compressor will work. I use my RP360's CS-3 emulation. You can use that, a real CS-3 or a cheap Behringer CS400.

Lead circuit only, volume on 10, tone on 10. All 3 pickup selector positions work quite well for surf.

Lead circuit only, volume on 10, tone on 10. All lead circuit pickup selector positions work well just like the Jazzmaster, but in my experience, it is best to leave the "strangle switch" off for the best surf tone. You may find however that it sounds better with it enabled. Experimentation is required on your part to find out which sounds best.

In addition, there is that Telecaster twang thing going on. It is tradition that the Tele rear pickup is overwound like a lap steel electric which is a big part of what makes it twang so much. It's also a big reason why it sounds so different compared to a Stratocaster rear pickup.

I'll put it another way. When you strum a Jazzmaster or Jaguar plugged in with proper compression and a ton of spring reverb, you will instantly think, "Yep, that's a surf tone" the instant you hear it. When you do the same with a Strat, you'll think, "Yeah, sounds surfy but I'll need to tweak it a bit." When you do the same with a Telecaster, you'll think, "This sounds like country electric guitar tone with a lot of reverb in it."

Personally, I can get a Telecaster to surf, but I totally admit it's not as easy to get the drip tone compared to using other guitar models.

Surf tone for the most part can be done with any electric guitar provided you have, at bare minimum, a very trebly rear pickup, which the Telecaster has. After that it comes down to EQ, compression with tight attack and a proper sounding spring reverb.

In the end, yes, a Tele can surf. It just takes more effort to make it surf compared to Strats, Jazzes and Jags. But it is totally doable.