The second best wristwatch in the world 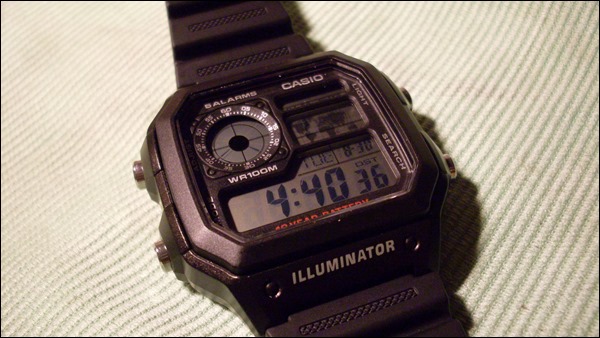 What does the AE1200 have that the F-91W doesn't? Quite a bit, actually. Five alarms instead of just one, countdown timer (very handy), 31 time zones with the ability to configure 4 different screens at a glance, full auto-calendar up to year 2099 (meaning the watch knows when it's a leap year), better "illuminator" amber backlight (vastly superior to the F-91W's micro light), the addition of showing the month on the main timekeeping screen, the ability to toggle on/off Daylight Savings Time, the ability to scroll forward or reverse when setting the time, alarm or timer, and the ability to silence beeps when going through menus.

The round pseudo-analog clock on the top left of the face, while fully functional, is pretty much useless because it's hard to read. Looks cool, but that's about it. Thankfully, the time below it is easy to read.

Several models exist for the AE1200. You can get one with resin strap, metal bracelet or nylon strap. Case colors available are silver, black and olive green. Bezel colors available are black or olive green, depending on model. The "safest" look for one, which is to say "the least dorky look", is the all-black model pictured above, the AE1200WH-1A.

The AE1200 is very mod-friendly. Taking off the back plate, popping out the module and modifying the plastic insert is really easy.

The best thing about the AE1200 is its reliability. This obviously isn't a G-SHOCK, but it is one of Casio's toughest low-cost watches. And in my experience it keeps very good time. Mine typically won't lose more than 1 to 2 seconds per week at most. Yes, per week. Not per day. You could get away with only resetting the time twice a year for Daylight Savings changes and the watch would only be 30 seconds to 1 minute off at most.

First, the AE1200 is slightly more difficult to read. While the F-91W is smaller, it is easier to make out the digits on it.

Second, the AE1200 is more complicated. Part of what makes the F-91W so great is that it's really easy to operate, whereas with the AE1200 you do have to take some time to learn how to adjust its settings.

In the end, I'd just recommend doing what I did. Buy both. They're both cheap, both built well, both very reliable and both provide years of service.