What is it like going to a NAMM show? 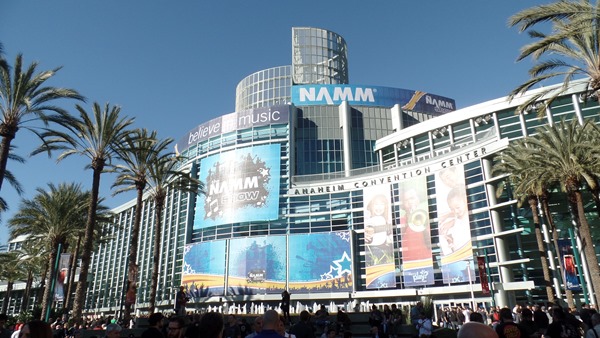 Yes, I went to NAMM 2015 (National Association of Music Merchants) this year. What's it like? Probably not what you think.

What is the NAMM show?

It is the largest (in the world) trade show for the music product industry.

The thing to note here is "music product industry." This show is not for the public, meaning is not an event where you can just walk up to an entrance, flip a few bucks over for a badge and get inside. To get into NAMM, you have to register for it in advance, and there are a lot of rules involved to even get a badge to get in.

Now while there are performances inside the NAMM show, it is first and foremost a trade show.

The big companies like Fender, Pearl, Peavey and BOSS are on the top floors. The lower floors contain the not-so big companies and the "basement" area is for smaller companies.

Is there a magical, mystical aura surrounding a NAMM show? 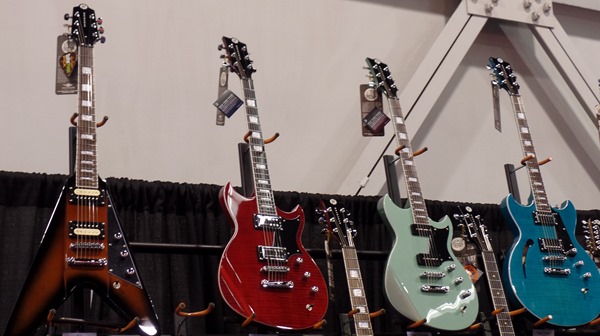 No. Or rather, not after the first day.

It is totally true you will see every single guitar you ever wanted at NAMM, plus at least about 50 more you didn't know you wanted until you see them. If you wanted to, you could easily spend a million dollars in just one day, as there are many companies who sell instruments and audio gear right off the floor.

NAMM is a spectacle, no question about that. It's easy to get a sense of being part of some magical thing while being there, but in the end, it's just a trade show with a lot of really, really expensive music gear.

But there are also other companies that sell gear that's not super expensive and just as cool as what the big guys offer, such as PureSalem Guitars. 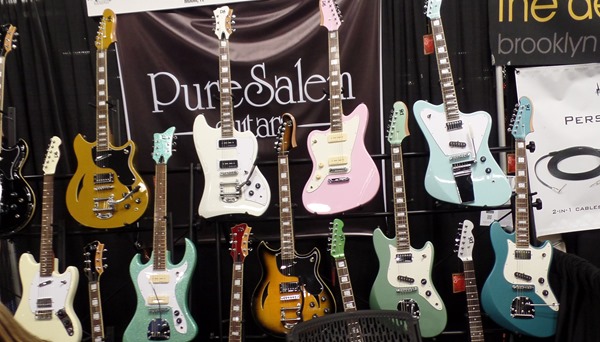 I recognized this brand from a video Jon Way did for Rondo where he featured one of their instruments. At NAMM, I finally got to play a PureSalem model (a Reverberation model,) and yep, it was just as good as I thought it was going to be. Better, in fact. Great guitar. I also dig the fact PureSalem is a Florida guitar company.

If you want a guitar that's cool and different that has a Fendery vibe with great sound, PureSalem is it. I love what this company makes. I also love the fact they are very lefty-friendly. I'm not a lefty player myself, but I appreciate the fact that lefty players have a lot of very good choice with PureSalem.

As a guitar buyer or builder, NAMM is worth going to 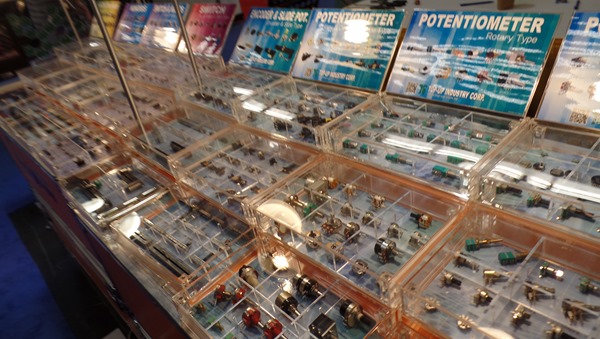 In the lower levels of the Anaheim Convention Center at the NAMM show, you start seeing a lot of less-expensive stuff. There's even a whole section dedicated to just stuff from China.

The point is just that one word. Stuff. As in stuff to build guitars with. Electronics, tools, woods, wiring and everything you could possibly think of to build a guitar with.

Heck, I even saw a Plek machine: 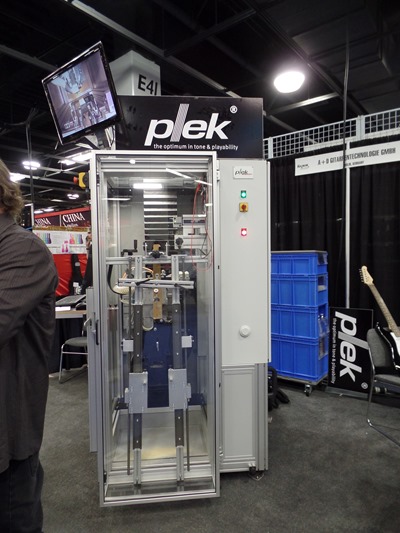 You don't want to know how much one of these costs

If you wanted a place to go that has every single possible thing to build a guitar with, NAMM will have it. And you can usually get really good deals when you delve down into the lower levels of the show.

Why bother doing this as a buyer when you can just order it online? Because you can actually see the merchandise in person. You can examine it right up close, touch it, get a catalog, a contact for the company to have a direct line to buy from, and so on. And yeah, that stuff is important.

Did I see any celebrities?

I did see Phil X (from the Fretted Americana YouTube channel) and my favorite guitar player ever, Greg Koch. Saw them both. Didn't get photos or talk to either of them (both were busy,) but yeah, I saw those two guys. I also got to see owners of well-known makers of amps, pickups and guitars.

Also got to see Victor Wooten in person. He's a bass player.

However, I knew that all those guys were there for business reasons first, so I didn't bother them. Seeing them was cool, though.

Should you go to NAMM? 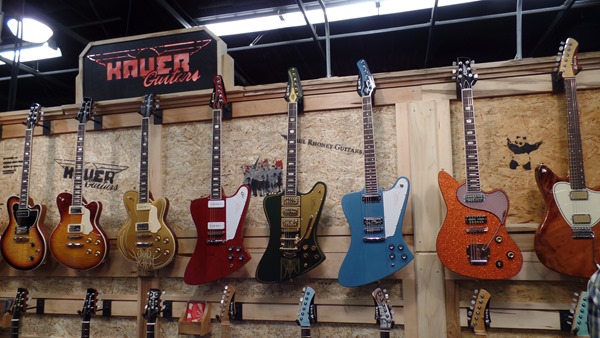 I would only recommend going if you go for the right reasons.

Again, this is a trade show. NAMM is not like a Star Trek or comic book convention. Not at all. Yes, you can go and have a good time and all that, but remember that if you're not there to buy, the novelty of seeing all that expensive guitar gear will wear off real quick and you'll end up spending a bundle for nothing.

Things to know about a NAMM show 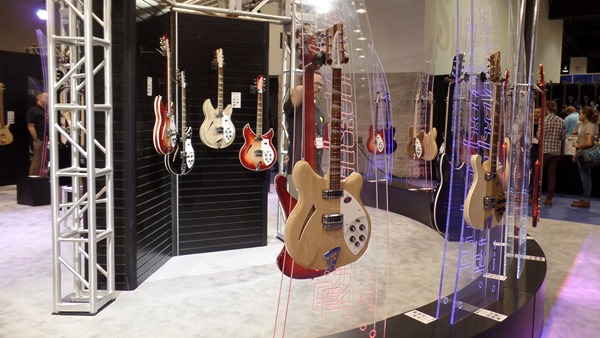 There are people playing instruments everywhere, all playing different things, all sounding like a big, jumbled mess, and that's just the way it is.

It is totally normal that you will have to SHOUT in order to have a conversation with someone even as little as 2 feet away from you.

Which is the loudest hall? The drum hall, of course.

There's really no way to get to NAMM cheap, nor attend NAMM cheap.

It's in one of the most expensive parts of California (did I mention it's expensive?)

The Anaheim Convention Center is about 27 miles south of Los Angeles CA and about 15 miles north of Irvine CA. In other words, everything in this area will cost you plenty. There is no such thing as "roughing it" to NAMM. If you go, you will pay, pay and pay some more, and that's just the way it is.

Getting a badge isn't easy

Get in early and hit the bottom floors first

You're most likely going to get deals on guitar parts among other things, so you might as well head straight for the lower floors first and chat it up with the companies down there. Even though it will cost you a bundle to get to NAMM, that cost can all be made up by scoring some good deals.

If you get in on the first day, you'll be able to take your time, browse more and not be constantly bumping into people.

Most people who take orders can ship anywhere you want

It's normal to place in an order with a participating company at NAMM but not take the merchandise home from the event, due to the fact it can be very annoying getting the stuff you bought to the hotel, to the airport and back home.

While there are a few companies who only sell on-the-floor-only, the vast majority of them will be able to take the order for what you want and ship it anywhere you like.

I can honestly say you are far better off making orders and having them shipped rather than trying to carry what you buy out of the event. Believe me, you don't want to be lugging stuff around at NAMM.

Most companies prefer to take bulk orders. If you wanted a pickup from a specific company for example, you probably won't be able to buy just one because the minimum order would be something like 20 or 50 of them.

Then again, it depends on the company. Larger companies will usually require minimum bulk orders. Smaller companies are more flexible, and some may allow you to buy just one pickup right off the floor. You'll have to shop around.

Some companies sell nothing at NAMM

This may sound strange considering NAMM is a trade show, but there are a few companies who literally do not sell anything while there. Some companies are just there for bragging rights, or there just to party.

Fortunately, most companies are there to buy/sell/trade. But don't be surprised if you run across a few that have product on the floor but won't sell you anything.

Was my NAMM experience good? 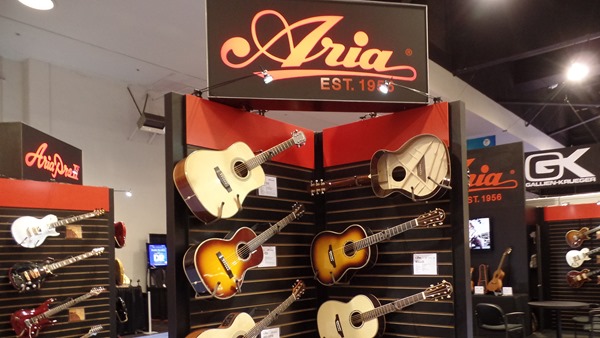 Things seemed to be fairly orderly for the most part (as much as can be expected for an event this large.) I wasn't there to buy but rather to observe, take photos and record video, which I did.

The way I approached NAMM was to go there with an open mind. Said another way, I went to NAMM with no expectations other than to see a professional, well-organized event. And yes, it was pro and well-organized.

Is NAMM like a "Disney World for music products"? Yes and no. There's a lot of flashing lights, expensive displays and so on, but in the end, it's all just music product. It's like I said above, on the first day you'll be wowed by what you see. But after that, the novelty wears off and it's time to get down to business.

You can go for the spectacle, which is all well and good, but you're better off going as a buyer and take in the spectacle as a nice bonus of sorts. Again, remember, NAMM show is a trade show first.

In the end, yes, it was a good experience.