Which Casio keeps the best time? 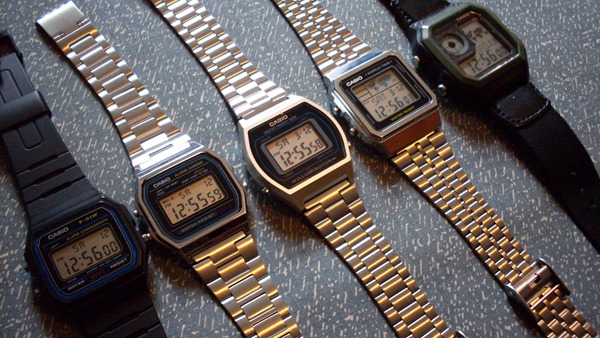 5 watches, all with different personalities. The day this gets posted this is when Daylight Savings Time will go into effect, so yeah, it's appropriate to talk about watches and time. 🙂

My F-28W is not shown because I forgot to include that one in the photo.

The B640WD keeps the worst time, as it loses about 1 to 1.5 seconds a day. Over the course of a month, the watch will be off from anywhere to 30 seconds to 1 minute.

Now of course, any watch that loses a minute a month isn't bad, but it is bad for a Casio digital.

A tie between the F-91W and the AE1200. Both of these will only lose half-a-second to 1 second per week which is as good as it gets for a non-atomic/non-smart watch.

I wear the A158 the most often

The A158 is an F-91W in a metal case with metal bracelet. Both watches use the exact same module, but the F-91W has slightly better timekeeping to it. So why wear the A158? Because I like a watch with a metal case and bracelet.

Which would I choose if I could only have one?

The AE1200. My version has a nylon strap that won't break, the backlight is great, it has superb timekeeping accuracy, the auto calendar is programmed with all the leap years until 2099, you can turn off/on DST with it, it has 5 alarms, countdown timer, chronograph, and the battery lasts for 10 years. The AE1200 is just a great all-around workhorse digital.

I'm glad to have the Casio digitals that I do. Yeah, I have too many, to be sure. But they're small, easy to keep in a box, and cheap. 🙂

Have I found the right analog yet?

Nope. I sent the V003 I bought back after receiving it. Tried it for a day, and it just didn't fit correct on my wrist no matter what adjustment I made.

I might be trying a square or rectangle shaped analog in the near future. That's a possibility. Obviously, I like angular watches given that all of my digitals have angled shapes to them.