why do i even own a bass guitar? 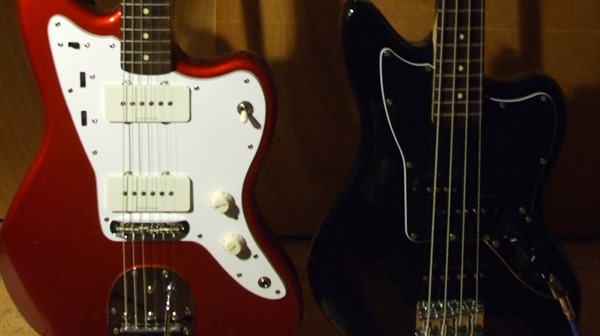 Little know fact: I've owned a bass guitar ever since my teens.

The Jag SS I just bought is actually my third bass. The first was a black Epiphone P-bass copy that I never learned the model name of, bought for $340 in the 1990s. I begged my dad to get me one because I wanted to play in a band with it (which I did). After I quit that band I kept the bass for a while. Eventually, that bass was chucked and replaced with a Yamaha RBX170 in 2005. And now, 9 years later, that's been replaced with the Jag bass.

People get a bit shocked when they see that I can actually play a bass correctly. So why haven't I included it more in my recordings? Mainly because for all this time I've been playing the wrong bass. I think the short-scale Jag is the right bass for my style of bass playing when I pick one up.

Any guitar player that records at home such as I do eventually comes to the realization that no matter how many bass samples you download or what keyboard/synth/sampler you use or what computer wizardry you try to replace the bass guitar, none of that replaces the real thing. When you want real bass, you need a real bass guitar...

...but you need the right one.

P/J is just right for me

For me, the P/J offers the widest possible tonal range for a bass guitar without the need for preamps, crazy EQ setups, custom cutoff toggle switching or any of that other stuff. A P/J does exactly what I want it to do and does it well.

I can go straight from vintage-to-modern sounds with a P/J. I've got the "midrangey" P in the front and the "honky" J in the rear. Separated, they have a vintage-style tone, and together they have a modern-style tone.

Is P/J the ultimate pickup configuration for a bass? For me it is. It's arguably the absolute cheapest and easiest way to have a bass that covers the most tonal styles you could ever want out of a bass guitar.

Is there a FENDER bass that's a P/J?

Yes. There are six of them at the time I write this, not including signature models.

Fender is really careful when it comes to releasing P/J-configured bass guitars, because the Fender bass purists scream their heads off every time they do it; this is why every Fender-branded model that has P/J is a special model of some kind. Fender purists will give an "OK" to something different as long as it's a special model.

I don't have any health issues with my wrists, hands or arms, nor is there anything wrong with me. I just don't take well to the 34-inch scale and never have, nor do I take well to standard-size bass strings.

Short scale allows me to play longer. A lot longer. And my fingers, hands and wrists don't get wrecked nearly as much.

The Jag SS comes installed with Fender 5250XL short scale strings. It's a 40-95 sized set, which is commonly termed as "super light" or "extra light". They work for me because the tips of my fingers don't get wrecked nearly as much compared to light or medium string sets.

However, if it proves to be true that the roundwounds still wreck my fingers too much, I'll try a D'Addario Half Round set, namely the ENR70. Same set size I have now, but with the half round shape. They're unfortunately long scale so I would have to cut off a ton of excess string, but, well, that's what they got. Yes, D'Addario does make short scale sets, but not in a half round flavor.

If you're asking, "Why not use flatwound?", I don't like flats because they feel too weird to me. I want to feel at least some windings on the strings.

How does a guitar player pick the right bass?

Most of the time, when a guitar player needs a bass, he or she buys the wrong one mainly because of not knowing what really works and what doesn't.

If you're a guitar player looking to buy a bass, here's my advice if you have absolutely no idea what to get. 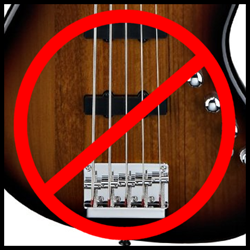 Yeah, you want that low B that a 5-string bass has because you think it's cool. Well, that's the totally wrong reason to get it.

You're going to go out and buy a cheap 5-string bass and it's going to be awful because that B is going to be buzzing and flopping all over the place.

In my experience, the main difference between a cheap 5-string and an expensive one is that the expensive one will not have string flop on the B. The bridge will be better as will the nut as will the frets, and the B will be "smooth" on the expensive bass. On the cheap bass however it will be a buzzy, floppy mess.

You are better off just getting a 4-string, switching to a heavy gauge string set and tuning the bass to B-E-A-D instead of E-A-D-G if you want that low B. Yes, you will have to raise the strings to accommodate for the looser string tension. And you'll have to intonate again. And you'll probably have to crank the truss rod a 1/4-turn or two to get back proper neck relief (or maybe not, because the heavy string set may provide proper tension for enough neck relief, but you'll have to check to make sure). Worth it? Yes, because you'll have a low B that won't buzz or flop.

You're not going to play high notes anyway, so there's no reason to get a 5. Get the 4, put on the heavy strings and tune to B-E-A-D.

The Precision Bass a.k.a. P-Bass which most bass players just call P has just one split-coil pickup in the middle of the body. There is no pickup buzz because the coils are side-by-side like a humbucker.

One output jack, one volume, one tone. That's it. It doesn't get any easier. The P is without question the easiest electric bass guitar on the planet.

I don't do P-basses because I prefer short scale. But it's probably true you're okay with standard scale. When you want a bass that "just works" and is a bass your bass player friends will be totally familiar with when you want to hand it over to them when they come to visit, that's the P.

The P to get is the Squier Vintage Modified Precision Bass in Amber. Why? It's a maple-board version that has all the classic P cues, is pretty much guaranteed to have higher resale value should you decide to sell it later ("woody"/"furniture" looking bass guitars with maple fretboards always seem to sell better), and all your bass player friends young and old will dig it. Win-win-win all around.

The Squier P in amber is so good that your bass player friends will probably offer to buy it from you once they play it. Yes, really.

It is typical that any guitar player who buys a bass just leaves it in the open for weeks or months on end. After a while it gets quite the layer of dust on it. Then they wonder why the bass sounds all "scratchy" when they go to play it later. Well, duh, the controls got full of dust.

Even if after you're done playing the bass you just shove it in a corner of a room, in the closet or under the bed, put it in a bag first.

Remember that bass is a different animal

If you've been playing 6-string guitar and really haven't played bass much (if at all), when you first get your bass, you're going to suck at it.

"But I already play guitar... so I should know the bass already, right?"

You might know the notes, but you don't know the technique. There's a lot more travel involved for both hands, your hands and fingers are going to get totally wrecked as you learn the instrument (which is normal until you get used to it), and in some respects it's like learning the guitar all over again...

...but it's a cool instrument to know. Knowing bass opens up new ideas and new ways of doing things. For example, you may find it much easier to write songs using just root notes on bass instead of playing chords on guitar.

Also, for some of you out there who read this, you might have been bass players all along and didn't know it. Some guys and gals upon picking up a bass do switch to it full time because they enjoy it more. That has been known to happen (especially for those that get ticked off at the 6-string guitar real easy).