Why I use nickel-plated strings 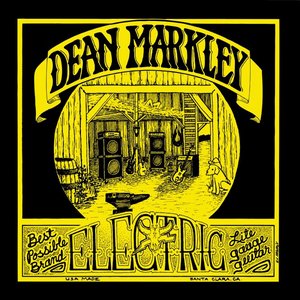 Fender electric guitars do typically work best with .009 to .042 gauge string. Both Squier and Fender do ship electric guitars from the factory with that size string installed on the Stratocaster and Telecaster. In addition, the string is always nickel-plated, commonly abbreviated as NPS (nickel-plated steel).

My string of choice for my Stratocaster guitars is the Dean Markley 1972 Vintage Reissue, and I have very specific reasons why I use that string.

They bend easier. A big reason I'm able to do the crazy bends I do on a Strat is because of NPS strings.

The "semi-bright" tone sounds better for barre chords. NPS strings aren't known for being super-bright (as in 'trebly'), but when playing chords they have what I best describe as a "more even" sound to them.

I can "ring out" notes better with NPS strings. On the neck position I can get the classic "blue tones" I love, the bridge/mid and mid/neck "quack" pickup selector positions sound proper, and my bridge position setting "growls" like I want it to with NPS. With plain steel the tone to my ear is just too "tinny".

Plain steel hurts my fingertips and nickel doesn't. When I play on plain steel strings for even as little as a half-hour, my fingertips get very sore, but that doesn't happen on NPS because nickel is a softer metal.

This is my most important point and I have a few things to say about this one.

Here's what happens with each type of 'special' string:

These are strings that were frozen (usually by being dipped in liquid nitrogen) during the manufacturing process. Supposedly, the cryogenic process adds "brightness" to the string and extends the life of it.

Are they "brighter"? Yes, but only for about 2 weeks and then they dull right out.

Do cryogenic treated strings last longer? Yes, but there's a few tradeoffs to this. No matter how often you clean them, the sheen will dull out. In addition, as the steel gets older it will dent. Regular strings will just snap. Cryogenic treated strings usually don't and will instead keep working, but dent in the places where it would have snapped. You'll see this happen on the 1 and 2 strings the most where a portion of the string will have a little "squiggle" to it over time. The string is still there and while it didn't bust, it will dent. There's nothing wrong with this, but it just looks weird.

These will never rust, and that's a fact. However over time what happens to them (particularly on the 1, 2 and 3 strings) is that they turn black from all the gunk that gets on them. It doesn't matter how much you clean your strings as the blackness will happen. Stainless steel may not rust, but it does tarnish, and that's where the blackness comes from. It can happen even with the guitar just sitting there on a stand and not being played.

Note: Stainless steel strings do have a legitimate purpose. If you play slide guitar using a steel slide, stainless strings work very well with that. Consider that with a steel slide you're dragging steel-on-steel which will get strings rusty real quick. Use the stainless kind and rust isn't an issue at all since it won't occur.

These are the type of special strings I'm going to talk about the most.

Coated strings are only good for as long as the coating holds out. Once the coating starts to wear off - and it will - it dulls right out.

You may have heard some people on YouTube lately touting that the Elixir Polyweb string "with anti-rust plain steels" is supposedly the best string ever.

Elixir says that their coatings prevent gunk from getting into the wound strings.

Yes, but only to a point.

It's like I said above, as long as the coating holds out, it will keep the gunk out. But once that coating starts to wear off, in comes the gunk, dead goes the tone and there's not a thing you can do about it.

Yes in the respect they won't rust as quickly or collect as much gunk. No in the respect that they will snap in the same amount of time an NPS string would. Why? Because the coating is what it is - a coating. It doesn't strengthen the steel whatsoever. Some players say the coating "bonds" the steel, but I totally do not buy that at all because I can bust through a set of Polywebs in the same amount of time as I would an NPS set.

How long does a coating last?

Depends on the player. The more you play, the faster the coating wears off.

The Dean Markley 1972 strings can be bought in a box of 12 for $35, which is roughly $3 per pack of strings. Coated strings are always more expensive and usually more than triple the price of NPS. Using the Elixir Polyweb example, you will spend a bare minimum of $113 for 12 sets, meaning each set cost you roughly $10. You're literally paying $1.60 per string with Polywebs.

If you play your electric guitar regularly, coated strings do almost nothing for you since you're going to change them out on a regular basis anyway. The only advantage you'll get is that they'll feel smoother and I'll talk about that more in a moment.

On acoustic guitars, coated strings do actually serve a legitimate tonal purpose as they do not "screech" nearly as much when you drag your hand across the strings when playing chords; this is absolutely true.

If the intent with your electric guitar is to display it as a showpiece, such as hanging it on the wall and rarely if ever playing it, or maybe prepping it for sale as a collector's item later, coated strings will serve you well since you'll probably never wear off the coating. The coating will work better than stainless steel because it won't tarnish, only require a periodic wipe-down to keep the strings shiny and playable, and last for years. And when I say "rarely if ever playing it", that means you play the instrument less than 2 hours total over the course of a year, and when you do play it you never do any crazy bends or anything else that would decrease the life of the coating.

The smooth touch of coated strings is negated by the fact most have no nickel in them, requiring you to bend harder. Yes, coated strings are smoother to the touch, no question. But for the ones with no nickel content in them, what's the end result? Fingertip soreness from having to fight against the fact the string doesn't bend as easily. So sure, when not bending the strings feel great, but when you are, you'll be in a world of hurt when you're done playing.

The old way is still the best way for players

Traditional NPS strings have the same problems they've always had. They're only good for a few weeks before they need to be changed out and rust easily. I don't deny that at all. However they still are the best choice for most players. A new, fresh set of strings always looks and sounds the best, and part of being an electric guitar player is that you have to change your strings a lot, and that's just the way it is.

Guitar collectors just love-love-love the coated strings because it allows them to not have to change the strings as often, and that's fine. As for the rest of us who actually play our electrics a lot and know we have to change out strings regularly, coated strings don't do a thing for tone or sustain on electric guitars.

On a final note, I don't use the 1972s for any "vintage" reason, but rather because to my fingers they have the smoothest touch for NPS, have the right tension for how I play, bend correctly on a Strat-style guitar as far as my preference is concerned, and sound right to my ears. Nobody ever recommended to me to use Dean Markley strings. I ultimately decided on using them for everything just from good old trial-and-error. I tried a bunch of different brands, and the 1972s suit me best.