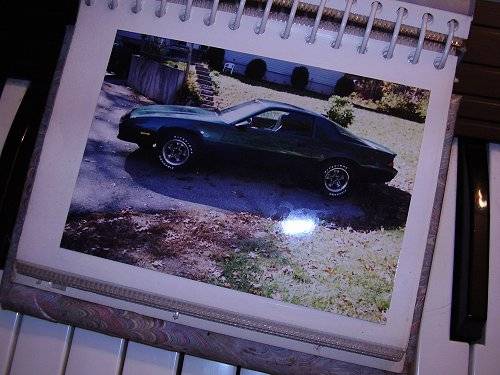 Some of my friends have been asking for a long time for me to get a pic up of the old Camaro I used to own. Well, here it is. Decided to go artsy and take a photo of a photo (haHA!)

All my friends absolutely loved this car. Girls I dated positively drooled over it. Originally the car was white. I had it repainted to 1999 Pontiac Manta Green (color is available by looking it up in any NAPA paint chip book, just go to a NAPA and ask).

Even friends of mine who positively hated Chevy's liked mine because it was done right.

The car was 100% bone stock with no options and no mods whatsoever, but clean as a whistle. Interior was near mint and 100% black - the blackest interior you've ever seen. It had the original Delco 15-watt CD player which worked wonderfully.

Why did I get rid of it? I hardly ever drove it. It's not that I couldn't drive it (it was very driveable), it's just that I couldn't do anything with it other than cruise. Even with a car as cool looking as mine was, the engine just didn't do it justice.. that and it had a crapload of miles on it.