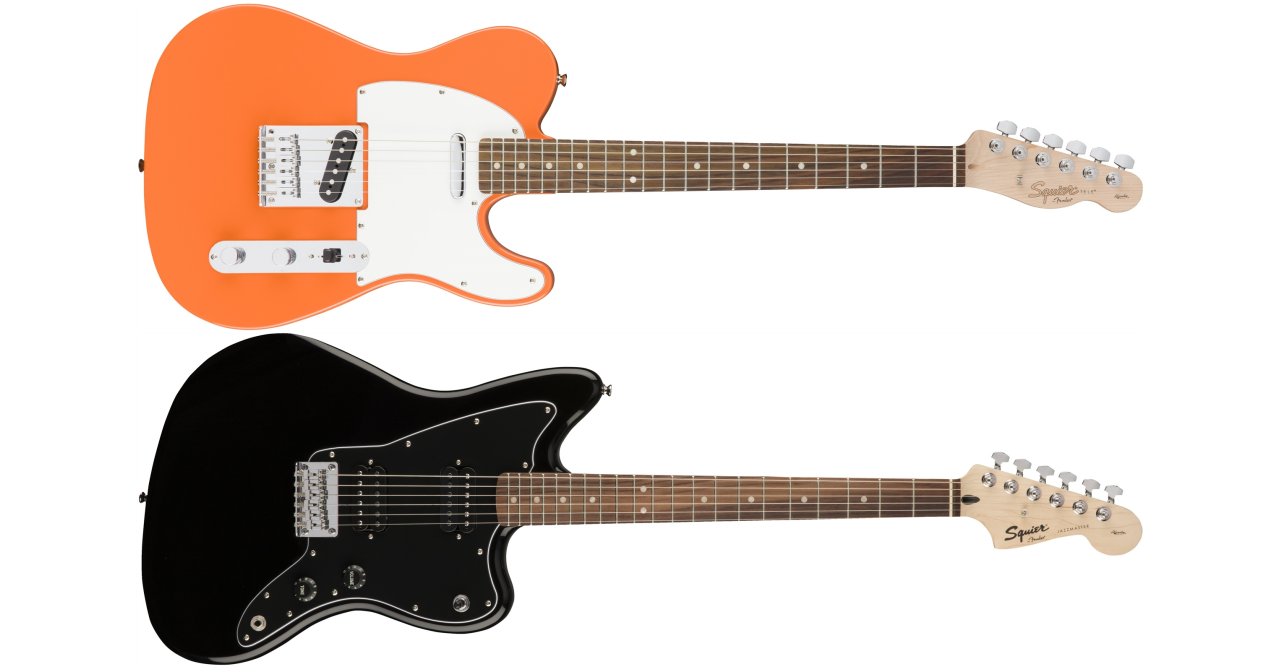 You didn't have the option of getting guitars like this for so cheap a few years back, but now you can.

I remember when Squier introduced both the Classic Vibe and Vintage Modified Series guitars to market. They were priced very well. I bought a few Jazzmasters (I currently own 2) and a few Telecasters (I own 2 of those also.)

CV and VM Squier guitars today has risen in price significantly. For example, I got my '72 Thinline Tele right before the price increased to $450. Great guitar, but not exactly cheap anymore.

But then there's the Affinity Series from Squier. This is where you go when you want Fender style guitars cheap.

It's August 2018 as I write this. The Affinity Telecaster has been around for a while but got some slight updating, and the Affinity Jazzmaster HH is something that didn't even exist until 2017, so that's still fairly new.

For those that know the Squier brand, you're probably asking yourself "Isn't the Bullet Series cheaper?" Yes. But a Bullet Tele is an on-again/off-again thing where availability is concerned (my Bullet Tele is more or less a Guitar Center only thing,) and the Jazz is Affinity only at this price point.

Both of these guitars have 2 pickups, 3-way switching, 21-fret necks, 6 inline sealed tuners and are hardtails (no tremolo.)

What differs between the two are as follows:

The sound of the guitars is very different from each other. Telecaster has low-output single-coil twang while the Jazzmaster's humbuckers have greater output with less twang compared to a Tele.

However, ultimately the decision boils down to whether you want humbuckers or single-coil, and whether you prefer a center waist or offset waist body guitar.

Jazzmaster is the better sit-down guitar

The Jazzmaster body shape (a design dating back all the way to the late 1950s) was designed first as a sit-down guitar.

This doesn't mean you can't play it standing as you obviously can, but it does have a shape that is more comfortable playing seated compared to a Telecaster.

This also doesn't mean you can't play a Telecaster slab shape seated. I do it all the time. But I'll be the first to admit that the Jazzmaster shape with its offset waist construction and nice contouring makes it the better sit-down guitar.

Which is more mod-friendly?

The Jazzmaster is the more mod-friendly because all electronics are housed under the pick guard, whereas with the Telecaster you have 3 areas to deal with (rear plate, pick guard, control plate.)

For things like swapping out pickups and such, the Jazz HH is far easier to deal with.

I give my nod to the Telecaster for these reasons:

Having 8 colors and 2 neck styles to choose from is nice.

The Jazzmaster may be the same 25.5" scale length as a Telecaster, but the overall length is longer, meaning it does not fit in regular-size gig bags or hard cases. I learned this the hard way.

Telecaster, on the other hand, fits in any guitar bag or case.

This is not that much of a difference, but when every ounce counts and you want light, Telecaster is usually the lighter of the two. I say usually because sometimes an oddball Tele gets sent out of the factory that's over 8 lbs for whatever reason. It doesn't happen often, but it does happen. Similarly, sometimes you get lucky with a Jazzmaster and get a light one. My Sonic Blue JM is such an example, as I'm pretty sure it's about 7.5 lbs (3.4kg.)

Now of course, the easiest way to get a light electric guitar is to go semi-hollow. But where the cheap solid-body is concerned, the Telecaster is usually lighter than the Jazzmaster.

In the end, you still get something nice for just 200 bucks

There is one thing that makes Affinity better than Bullet Series Squier guitars, and that's the tuners.

For as long as I've seen Bullet and Affinity guitars from Squier in existence, the biggest cost cutting always happens at the tuners with Bullet. With Affinity it is immediately noticeable that the tuners are much better.

Affinity Series from Squier is genuinely good stuff that can take a beating. That along with its better tuners and better body finishing justifies its $200 price tag over $150 Bullet models.