Someone needs to make an "ex-wife" version of this 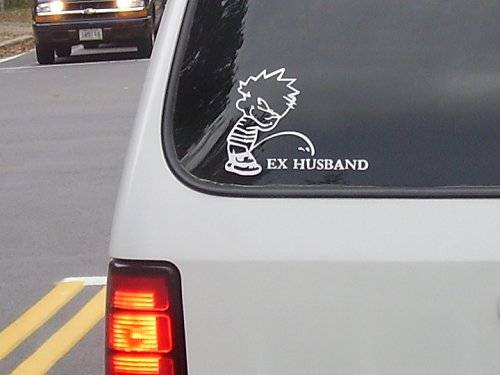 Shot while at a stop light in Rhode Island.

A few hours ago I took a shower. Not a big deal, right? It was a big deal for me. I'll explain:

The apartment I had in Bangor was in a really old house well over one hundred years old. Many things in the house were kept old on purpose to add to the "charm" of the place. The one thing I absolutely hated about my apartment above all else was the bathtub and shower.

The bathtub was a free-standing ancient thing. This is one of those tubs you see that has "feet" on it. Here's a pic of what one looks like. Note the steel ring that holds the shower curtain and the open pipe for hot/cold water.

Some people love tubs like this. I absolutely hate them. First of all, you have to step really high to get into the damn thing. Secondly, the curtain is literally touching you when showering. You'd think there would be a lot of room inside a tub like this, right? Wrong. There's very little, especially with the original tubs of the past (not new construction). The tub walls are not straight, they curve inward, meaning little room to stand and the shower curtain drapes inward towards you. The shower curtain is also a humongous pain in the ass to open and close - something that should be a simple operation, right?

I myself am a shower man. I don't like baths and haven't cared for them since I was a little kid. When I got here at Pop's and hit the shower a little while ago... wow. It was awesome. A tub that's easy to get into, a curtain that draws easily, a shower head that has five settings on it (I love that), room to move without the curtain touching me, and a lil' shelf for my shampoo and other bath stuff (remember, in a free standing tub there isn't anywhere to put stuff - no shelves!)

I was very happy to use a modern shower. Those tubs of old can stay in the past as far as I'm concerned.

Observation of the moment:

It took me ten minutes to find a roll of duct tape at Wal-Mart today. This is because the Brewer Maine Wal-Mart has everything where it's not supposed to be.

That is all, carry on.