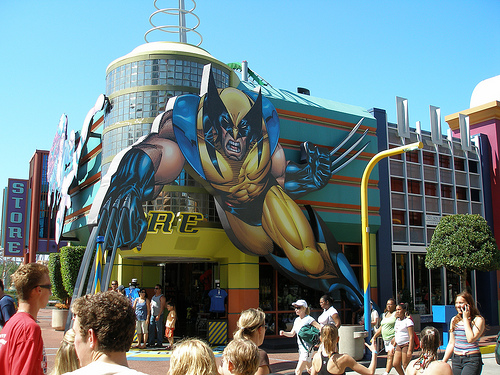 This is one of over 100 photos I took today at Universal Studios.

I have several more posts coming with the highlights. Stay tuned.

In short: Had  a blast. I highly recommend going.

(Update 3/26/2007) I accidentally chopped off the top of this post.. oops. I basically said I was going to Universal Studios and that one of my primary things was to get on the Back To The Future ride before it closed - which I did.

I also plan on going on every roller coaster I can, with one of them being the Incredible Hulk Coaster. Looks awesome.

A stroll down amnesia lane...Here are all the parks I've been to. It's a short list, but I plan to make it a long list in the future.Rocky Point, Warwick Rhode Island. Lots of people remember this one. It was the place to go in the 80's. Started going downhill fast in the mid-90's due to bankruptcy. Eventually got sold off. Last time I went there I went with a friend to see Winger. Yeah. For real. I'm ashamed to admit that. Before I stopped going there, the park was run down, ancient looking and just not very inviting. Whoever owned it let it go to crap.

Riverside Park, Rhode Island. This is now known as Six Flags New England. Definitely an improvement. Prior to Six Flags, Riverside was old, broken down, beat up and outright sucked - even worse than Rocky Point. Went there once when it was Riverside, and once as Six Flags. Wasn't impressed either time.

Aquaboggan, Saco Maine. Best water park I've ever been to, hands down. No question. Very clean, very easy to get around and most importantly, fun. Been there many times.

Water Country, Portsmouth New Hampsire. While bigger than Aquaboggan, not as fun. Seems a bit disconnected. Easy to get lost there. Went there just once.

Busch Gardens. Can't remember if I went to the VA one or the FL one. I remember as a little kid that the family kinda/sorta "stopped by", and I think my Mom got sick and we had to leave. Very short visit. And yes, it's true, I live less than a mile from Busch Gardens in Florida. Haven't been there yet - but will fix that right quick soon enough. 🙂

Walt DisneyWorld, Florida. This is another one of those embarrassing-but-true admissions that I live less than two hours from there but haven't been since living here. Last time I went was before Typhoon Lagoon was installed - and that was a long frickin' time ago.

StoryLand, Glen New Hampshire. Been there twice. Once with a group of girls when I was going to college in Vermont, and once with a girlfriend years later. It was okay. Nothing special really.

Anyhoo.. I intend to kick ass and chew bubble gum tomorrow, and I'm all out of bubble gum. 🙂 And yes, I'll have photos - not to worry.

A few more notes on Rocky Point, being this is a memory-lane trip..The best roller coaster in the park was called the Corkscrew. It was a steely coaster. I still remember the exact time of the ride's length - one minute ten seconds exactly.That same best roller coaster was responsible for at least one person falling off the coaster in the middle of the loop-de-loop. I remember seeing it in the paper. Can't remember if she died or not, but I do know it was a girl.

That park had one of the best arcades ever. Rows and rows of arcade machines, and an AWESOME pinball area, too.

Sure as anything, you would always see a hot-assed chick wearing pink spandex. Sometimes a few. Nice to see. 🙂

Also sure as anything, you'd see kids wandering around the park desperately trying to find their parents. Yes, that's sad, but bear in mind the park was tiny. It's not like you could get that lost.

Oddly enough, Rocky Point has a MySpace page. Yeah, I was surprised to see it, too.

And check this out, a Rocky Point television commercial from the 80's.

The rides seem are the Corkscrew, Yo Yo and The Flume. Nothing else, oddly enough.Amazing.Not enough for ya? Someone's making a movie about it. I'm not kidding.

In this clip you see more rides like Enterprise, Rock'n'Roll Express, Cyclone (the other car-based roller coaster), Free Fall and a few others.Warning: Seeing the pics of the abandoned park may cause some weird feelings. You've been warned.You can get more info on this at RockyPointMovie.com.

Make sure to also check out the Rocky Point Movie blog. Good stuff. There's photos there of the park in present day condition. Again, watch out for the weirdness concerning your feelings. 🙂

Yeah, holy crap I wrote this a long time ago back in 2007 and some of the links above are dead. But that's okay because the entire movie for You Must Be This Tall was released totally for free on YouTube back in 2012.

The movie is below. Enjoy.

Sales douche bag: "Sir, I'd just like to let you know that you've been approved for a DiscoverCard Plati--"

Note to DiscoverCard: I'M ONE OF YOUR FRICKIN' MERCHANTS THAT ACCEPTS YOUR CARDS. Don't hock your wares on one of your own sellers.