I currently own 4 Stratocasters. One by Fender and 3 by Squier. My very first guitar I still own, a 1989 Squier Stratocaster II. The second Strat was an 18th birthday present from my father - a 1993 Fender USA Standard Stratocaster, all $625 of it. My third is a 2010 Squier Bullet Strat, my fourth a 2012 Squier Vintage Modified Surf Stratocaster.

My USA Strat from day one never played right, but I didn't have the heart to tell my father, so I just dealt with it the best I could. The only thing I did to it was have the bridge pickup replaced with a DiMarzio DP181, which is still sold today. I replaced it because above the 12th fret there was this nasty double-note noise I can't even describe in words, but even that could not cure the neck and sound problems that guitar always had.

Fast-forward to present. The Surf is a replacement for the other new Vintage Modified Squier that had paint issues, and the Surf came with tube-type LS-102 Duncan Designed pickups. Nice, but in the end just too jangly for me. I did a video recently explaining that a change of strings helped with this, but after that the more I played it, the more I realized those pickups just had to go.

I didn't want yet another typical SSS Strat. I wanted a Strat with a humbucker in it, so I shopped around GuitarFetish's web site for a bit but there was nothing there I really wanted to buy.

Then it hit me. "Wait a second, my USA Strat has the DiMarzio in it.. I wonder if I can transfer the electronics out of that into the Surf?"

Before I get into the sound, I'll talk about the look first.

My '93 USA pick guard and the plate on back both have natural aging/greening on them, and this suits the Sonic Blue Surf very well. I definitely like it better than the pearloid pick guard that was originally there.

Now as for the sound, it's incredible. My USA never sounded that good because of the neck issues. The DP181 is a screamer, and the original USA pickups in the mid and neck positions suit very well also. The only "weird" position is the bridge-neck because it's technically a "trembucker" thing going on because of the 3 singles being heard at once.

I purposely recorded the video above with the noise gate completely off and loaded up a ton of distortion, and the guitar works great.

To some Fender "purists", it's sacrilege to mix and match USA and foreign Strat stuff together, but I don't care. I had all the materials, and the USA was basically unplayable. The truss rod had popped months ago, so the neck was beyond repairable. And even if it hadn't, there was buzzing issues and other weirdness about it that could not be cured.

Another thing to consider is that if I had actually bought all the parts needed to do what I did to the Surf, I did the math on this, and it would have cost me about $175 with shipping included. The DP181, 2 proper Strat pickups, aged pick guard and aged rear plate. And even with all that, the aging is fake while what I transferred over from the '93 is all real-deal greening/discoloration from being around for 19 years.

Being I knew I'd save 175 bucks just by moving everything from the USA to the Surf, well, that was a no-brainer to do it! 🙂

Things I immediately noticed as I was doing my "transfer" 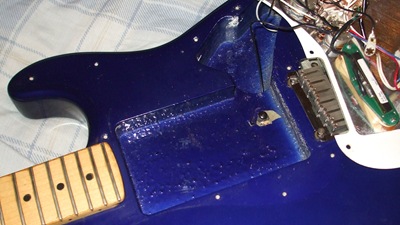 This type of routing is what's known as a "swimming pool". It means that it was a cost-cutting choice made to accommodate every single type of pickup configuration for that body style. It is the cheapest way a company can put routing into a guitar. Generally speaking, Strat "purists" hate this because there's a lot less wood to carry the tone through. You'll also notice a lot of crappy paint pits, huge bumps, and even a huge paint chip where the screw is for the ground wire. It came from the factory like this. 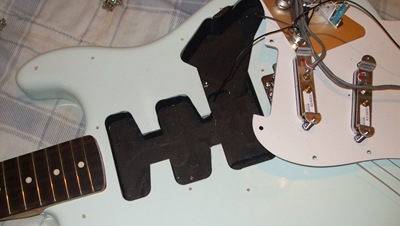 Night and day difference. No "swimming pool" here as the routing has been properly done, and all the routed areas have a nice thick flat-black paint on them with no overspray. Just from this alone, you know the guitar was made better than the '93.

Now again, I have to point out that early 1990s USA Strats are crap, as I'm sure modern USA Strats don't do that "swimming pool" crap anymore, or at least I hope they don't.

I also have to point out that with the Surf, you're getting a well-made guitar.

The only redeeming quality about the USA was its electronics, and that's why I moved them over to the Surf.

The Surf's electronics were in fact very nicely done: 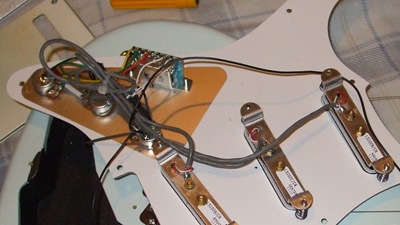 See how the wires are zip-tied and properly bunched? That's a proper setup. No loose crap anywhere inside the Surf is to be found.

However it's the sound of the pickups that ultimately drew me towards the USA's electronics instead.

On a final note concerning appearance, here are the two back plates side by side (Surf and USA): 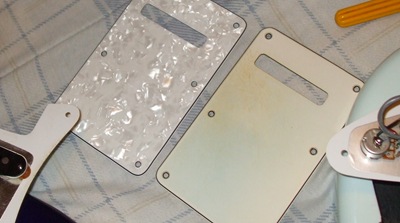 Surf on the left, USA on the right. The USA shows what can happen with almost 20 years of aging. The top portion has browned, and the bottom has greened. Bear in mind this was solid white when I first got it. You can't buy stuff like this. True aging only comes with age and nothing else. The pick guard has some of this as well.

I'm pretty sure that I'm definitely keeping the Surf with the USA electronics in it. Looks right and absolutely sounds right. Heck, even the DP181 is considered vintage because it has a manufacturing date stamp of 1991. It was sitting on the shelf for 2 years before I bought it in '93, so it's literally a 21-year-old pickup.

I'll have more videos with some more tone examples soon.

I remember a time when I used to change my blog template seemingly every other week, but then I stopped doing that and concentrated on content.

Due to a few plans I have in work, it was time to change the blog template again, so here it is. The goal was basically to make it more readable and easier to differentiate my music blogs from my personal blogs. On the home page there's the 2 types of posts (music and personal) in title summary, and with the exception of the home page or "(more...)" page, the background color is blue for music, green for personal. I'm not going to get into all the programming crapola I had to do to make that work, but let's just say it was a huge pain in the ass. 🙂

I personally don't believe there's any real way to use WordPress without having to learn how to program whether in small or large amounts. With all the programming I did for what appears to be the simplest stuff you think would be easy but really isn't, there are some site owners that would probably pay me good money just to have the same functionality.

The only reason I know how to hack code at all is because I was basically forced to learn it back in the day. In the late 90s and early 2000s there was nothing like what we have now. But even with what we have, code still has to be hacked up to make it do what you want and there's just no other way. Well, not unless you want to pay someone to do it for you, and that's not cheap. If someone wanted to hire me to add in the functionality I did here, they'd have to flash some decent green my way because it was such a pain in the ass to do here.

Hope this was all worth it. 🙂

Below the video are the strings I talk about, where you can click the appropriate links to get prices. Bundles of 3, 6 or 12-set are almost always available.

All strings below the video are 9-42 size. 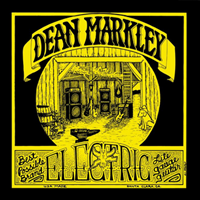 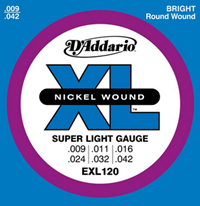 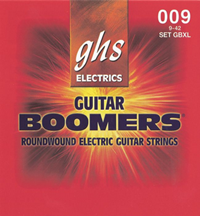