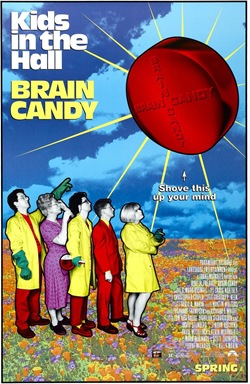 Brain Candy is a movie from 1996 that came about as the result of The Kids In The Hall television show. This is one of those movies that has cult status to it and nothing more, because in all honesty, it's terrible.

The first reaction to this movie is usually, "KITH made a movie?" Yep. It's that forgettable.

There are many problems with this movie. It was scripted like a TV show, you can tell it was rushed, there are things in it that just shouldn't be there, and the list goes on and on. And as is the case with most TV-to-movie films, television actors usually don't translate well to the silver screen. This is not to say they can't act because they can - but there is a huge difference between TV acting and movie acting, and what works on the small screen usually doesn't on the big screen.

When watching this you're waiting for the funny to happen, and it just doesn't. Well, almost doesn't. Just about all of Scott Thompson's scenes are funny at least for a moment. But those happen really early in the movie and the rest of it just drags along until the dumb ending.

A lot of times this movie tries way too hard to be funny and you can totally see right through it. And then the movie just does weird things that make no sense. Like in the beginning, you think the entire movie is going to be narrated by the cab driver, but that doesn't happen. He's there, then not there for a really long time, then there, then he's at the end again. There's many areas where things are just really disconnected, because like I said, it's scripted like a TV show with a weak movie plot thrown in.

Some people swear this movie is very funny. I don't think so. It has awkward humor that doesn't work, plot holes everywhere, almost zero pacing and it's a chore to get through it.

Give this one a pass. You won't be missing anything.

Guitars and synths don't mix, but I do both

I posted a video an hour or so ago on the used BOSS DR-3 I just received. The first rating on the video was a thumbs-down, so I disabled ratings because there will be a bunch of negative ones, and I know exactly why - because my guitar fans will go "Eww!" and the synth fans who are into Roland drum machines will also go "Eww!" all at once.

I was a synth player way before I was a guitar player. It started with cheesy Casio keyboards as a kid, then up to a Roland Juno-60 (the heaviest synth I ever owned), then to an Ensoniq SQ-1 Plus, then a very brief stint with a Korg N364 (which I hated and got rid of quickly), then the purchase of another Ensoniq SQ-1 Plus which I still own, and then an Alesis Fusion 6HD - also which I still own.

I am an Ensoniq guy primarily, and I was never one of those dance/house/trance guys. I'll put it another way in a term synth guys would understand. You have no idea how bad I wanted a Yamaha DX7 because I thought it was the coolest thing ever. I never got one because after a while I realized how inferior it was compared to the Ensoniq. But there's still a little part of me that even now still wants a DX7. Even the name of it just sounds cool.

There are synth guys out there to this day that wish I would go back to producing synth music and making synth videos, because I can tear it up on the keys quite well. However I find the electric guitar simply a cooler instrument to play. It's much more physical, much more "earthy" as your hands are on steel and wood instead of nothing but plastic, and I genuinely get more enjoyment out of it.

On my YouTube channel, almost every single video you see - or should I say hear - that has backing music, that was composed on my Ensoniq. Just bass and drums in all their FM synthesis glory and nothing more.

The reason I haven't been using the Ensoniq lately is just from the fact it's suffering from the ravages of old age. The sensors on the keys are simply wearing out, and missed noted happen a lot. And I'm pretty sure the circuitry is two steps away from total failure because the indicator lights are doing weird things, and the synth is crashing a lot. Synths just don't work too well after 20 years I guess (it was made in 1990 originally). Yeah, I could take it to a guy for it to be repaired - but guess what - try finding the electronics schematic for an SQ-1 Plus.

I basically only needed a synth with an on-board sequencer that could do drums and bass. Well, that's the DR-3. I hate software-based sequencing/composition and absolutely won't go anywhere near it. Way too much hassle.

The DR-3 basically operates just like an old-school synth workstation, and that's exactly how I like it. If you know older style pattern sequencing at all, the DR-3 is a breeze to use because it is a synth workstation in the form of a drum machine. Very cool little device, I must say.

Sometime in the future I plan on purchasing another synth, but it's going to be funny how I'm going to go about it.

All the expensive workstation synths are basically nothing but overkill and designed to connect to computers. I don't want that. All I want is something with a simple on-board pattern-based sequencer where I can string sequences into songs - just like on my old Ensoniq.

Synth guys will laugh their asses off at this one, but check this out:

The above is the Casio CTK-7000. To "serious synth guys", this thing is a joke, because no "true" synth would ever have on-board speakers.

But it has an pattern-based sequencer capable of 16 tracks in song mode (8 in pattern mode). Oh yes it does. And you can use it just like the old-school workstations where you can do everything manually without any auto-accompaniment.

Click on the synth to see the price; you'll be amazed how cheap it is. It's a basic workstation cleverly disguised as a portable piano, and I could do some seriously amazing things with it.

The unfortunate part is that is has full-weighted keys, and I can't stand those - BUT - I'd deal with it just to get what the CTK-7000 has to offer. And if I hated the key feel, I'd just hook up a MIDI controller.

Get this - it has the ability to record songs digitally to an SD/SDHC memory card. HOW COOL IS THAT on a synth priced this low? Seriously, it's frickin' awesome.

And get THIS - there's an arpeggiator in it too! This Casio is LOADED with synth goodness!

Guitar players are not synth guys - yet I am, and I know I'm a rare breed. I know my DR-3 video won't get anything for views because it's not the normal type of guitar video I post. And I'm not even going to post a link to this bloggo on my Facebook page either because I know all the guitar guys there will hate it. The attitude will be "STOP TALKING ABOUT THOSE GEEKY SYNTHS, MENGA.. PLAY YER FRICKIN' GUITAR!", so I'm not even going to bother.

Many guitarists out there are secretly synth guys also. They have to keep it secret because otherwise two worlds collide - electronics + programming vs. wood + steel. Both guitar guys and synth guys are of the attitude "PICK ONE OR THE OTHER!" No, and screw you. I do both. Deal with it.

I went to buy a small, inexpensive electronics item on NewEgg today, punched in my info at checkout and came to discover they don't accept General Delivery shipping addresses. The nastygram you get spit back by NewEgg's system is really specific on this too. No GD addresses. At all. Well, they lost a sale and I bought the thing I wanted from Amazon instead as they do accept GD addresses without complaint.

General Delivery is an alternative means of getting something shipped to you. How to use it is here (click on the "General Delivery" tab). I've received items before through GD and it does work.

Why do I use GD? Mainly for proper delivery. I have nowhere at my residence where a package can be placed out-of-sight. And there are some courier morons who will just leave a package in plain sight at the front door, where anyone could just walk up and take it. They're not supposed to do that, but do it anyway. And if you give instructions on the shipment not to leave it on the front door, they delivery douche bag usually ignores it. When I have a package shipped directly to the post office, it's at least in a place where nobody could just walk up and take it.

Why NewEgg doesn't accept GD addresses I don't know as it could be for any number of reasons, but they lost a customer today because of that.