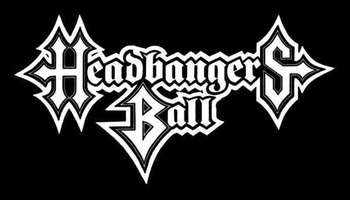 In the 80s and 90s I was all about metal, although I never really dressed or acted the part. Unofficially it's par for the course that if you work in IT, you're a metalhead. I have no idea why this is, but it's pretty much guaranteed that in any IT dept. there's at least one guy who is.

Headbangers Ball was an MTV show that ran from 1987 to 1995. It was brought back in 2003 on MTV2 and to the best of my knowledge is still running, but I've never seen the MTV2 version. The one I'm going to concentrate on here is the first run of the show.

The only reason to watch HBB was because of the music, obviously. It was only on that show where you could see stuff that was never played in regular MTV video rotation.

Here's some clips from HBB back in its heyday:

All this show had going for it were music videos and crappy interviews. When I say crappy I mean crappy. They were bad. Most rock musicians simply didn't know how to conduct interviews correctly.

The show operated using the lowest possible budget because MTV absolutely didn't care about it at all. And why would they? They shoved the show into a late Saturday night time slot where no business would want to advertise, so the show didn't make any money at all. HBB was the definition of "cheap cable program" during its entire run.

Only the truly dedicated tuned into HBB. The core audience were metal fans. This got skewed in the 90s by the fact MTV tried (and failed) to say "alternative rock" and "hard rock" were the same thing and put them on the same show. That obviously didn't work.

The end of HBB was one that didn't surprise me. It just simply vanished. No warning. No farewell show. Nothing. Just gone. MTV didn't even notify the host of the show it was going to happen. They just called the guy up and said he didn't have to come to work anymore.

Nobody has ever received a straight answer as to why HBB was canceled the way it did, but I can take a really good guess. The show wasn't making any money and at that point was costing the network just to run it. Being the budget was so low to begin with, there was absolutely no cash to spare to even put together a farewell show because they were probably already too deep in the hole at that point. The only choice was to give it the axe and do it unapologetically. No decent advertisers were interested, no money was coming in, the show was costing too much to keep running, so... that was that. Buh-bye.

Dropping HBB was one of many things MTV did in order to reinvent itself to be profitable. Remember, MTV invented the reality show format with The Real World that first came about in 1992. That show is to the best of my knowledge the first MTV-original program that was actually successful, wildly popular and wildly profitable. After seeing what original programming could do, dropping HBB was an easy decision as far as the suits at MTV were concerned.

HBB was awful and weird. The fact of the matter is that anybody today could recreate HBB on the Internet if they wanted to. All it takes is a crew of two people (host and camera guy), interview a bunch of local unsigned bands and go from there. It's not rocket science. The "set" could simply be some dude's living room, Wayne's World style, because the HBB set truly wasn't that much better.

I'm sure there will be another HBB, although it won't be called that. It's sure to exist only on the Internet because no network would touch it, and MTV obviously doesn't go anywhere near rock music these days. Maybe a metal fan will be able to bring back HBB in a new Internet flavor.

Hey, it could happen.

Until then, just relive the glory days and get a shirt.