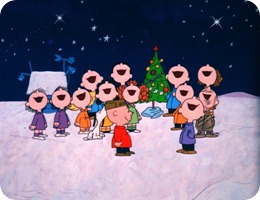 I have watched A Charlie Brown Christmas more times than I can remember. It originally aired in 1965 and has been broadcast yearly on TV ever since. First with CBS and now with ABC.

I had the opportunity to watch it on Hulu, which will be available until January 1, 2010.

This was the first time I watched this show on the internet, and a few things really stuck out. Several times I said to myself, Wait a second.. that's a scene I don't remember. What gives?

What gives is that the Hulu version is the closest cut to the original show that aired in 1965. The television broadcast purposely cuts out specific stuff, such as Snoopy munching on dog bones and the kids trying to knock a can off a fence with snowballs to name a couple.

I've known for a long time that the program was slapped together very quickly with almost no budget at all. It's amazing it even got finished at all. This is the reason why the animation is so choppy in some spots. I was also aware that the children that provided voice acting had absolutely no experience, hence the very unique slower dialogue delivery of the voices in the show. It's so unique that it's sometimes called the "Peanuts delivery style".

What I've learned this time around were a few more things.

Kathy Steinberg, who voiced Sally, was literally too young to read and had to be cued line by line just to get through the process.

The network execs really didn't want the Linus scene where he quotes from the King James Bible; they thought it would be "boring". I'm not kidding. They wanted to cut out the most important scene that brought the whole show together. Incredible.

The execs also hated the jazz piano soundtrack. They very reluctantly left it in.

There was supposed to be - and this shocked me - a laugh track. A version was mixed with the laugh track in there but fortunately it has never aired on television. Charles Schulz (author of Peanuts) positively refused for it to be there. Good call. Very good call.

So what makes Hulu's airing the "almost"-full version?

Well, let me tell you a few things about that. You can read the full write-up here on it if you wish.

The show was originally sponsored by Coca-Cola. As such, the opening and closing credits had Coca-Cola all over it. The opening titles actually showed the Coke stuff with Linus crashing into a sign and everything. This was cut out entirely. The closing title was an announcement stating, "Brought to you by the people in your town that bottle Coca-Cola." Someone fortunately recorded this - check it out. Now you know why the audio is so abruptly shortened right at the end credits.

In the scene where the kids are trying to knock a can off the fence with snowballs, that can was originally a Coke can.

All references to commercialism were cut out completely at one point by CBS in the 1990s.

It's like I said, the Hulu version is the absolute closest you'll ever see to the original. The only things truly missing are the Coca-Cola references from when the show aired from 1965 to 1967.

And oh yeah, I would LOVE to see the complete uncut original with the Coca-Cola sponsorship.

Well, here's something that will probably shock you a bit. Watch carefully.

Here's why the above is amazing:

First is the actual advertising of cigarettes on television. This was banned from American television and radio on January 2, 1971 and has been that way ever since.

Second is the act of smoking by family-friendly cartoon characters. This is something hasn't been seen since the ban - almost 40 years ago.

Third is something that just blows my mind. The advertising commands a full 80 seconds, and was directly integrated into the show. This is not your run-of-the-mill product placement. It absolutely does not get more in-your-face than that. It's unbelievably blunt advertising.

This is why I want to see the original Charlie Brown telecast with the Coca-Cola advertising. I really dig how corporations back then put so much creative effort in their ads, because they were allowed to. That's obviously not the case today - but it sure is an interesting footnote in history.