The first thing you should know when using Audacity 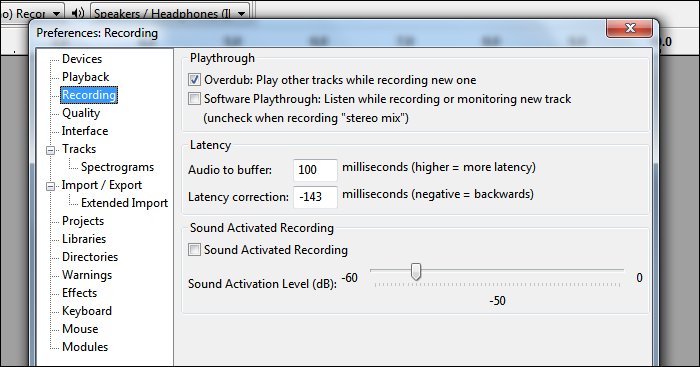 This is a great free software multitrack recorder, but there's a rather important thing you must do in order to get along with the software properly.

I use a Zoom R8 for multitrack recording. A huge reason why I use it instead of recording direct-to-PC is because it has zero audio latency, commonly known as lag.

Some people would rather just record direct to the computer via USB, and that's fine, but then you have to compensate for the lag. Why? Because audio over USB isn't latency-free, never has been, and never will be. It doesn't matter if you have USB 2.0 or 3.0 because the lag will always be there.

What happens when there's lag

Your recording will be out-of-time from one track to the next. If for example you set up a click track in Audacity and record without compensating for the lag first, what you play along with the click track won't match up.

How to compensate for lag in Audacity

1. Edit
2. Preferences (an additional window launches when you do this)
3. Recording (on left side menu)
4. Adjust latency.

The screen shot above shows an example of latency correction. On my computer, negative 143ms works.

Will that correction figure work for you? Probably not, because how much correction in the positive or negative direction depends on your computer hardware.

It will take a few minutes to figure out how much latency correction to use.

The easy way to determine latency correction for guitar players

Use a tempo of 120 beats per minute, with the number of bars as 16. This will create a click track for you to follow.

After that, record a track with your guitar following the click track as best you can, then stop recording, listen to the playback and see if what you played matches up with the click track. If it doesn't, you'll need to adjust for the USB lag described above.

Again, it will take a few minutes for you to determine what the best setting is for your computer concerning latency correction. You will have to make a few test recordings to figure it out.

Once you've found the proper latency correction value to use, you should only have to set this one time. The only time you should ever have to change that value is if you physically switch over to another computer (meaning a different PC, laptop, etc.)