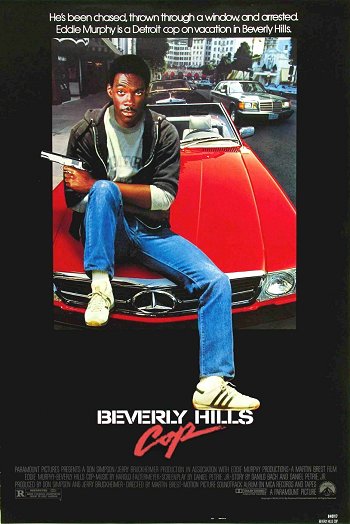 Beverly Hills Cop was a movie released December 1984 and it made a lot of money. Actually, that's not accurate. It made a ton of money. The budget was an estimated 14 million, and in the opening weekend in the US it made 15.2 million, and had gross worldwide sales of - get this - 316.3 million. Yeah, this movie made a ton of dough. In fact, it was the highest grossing movie of 1984.

I just re-watched this movie on Netflix, and came to a realization.

This movie really isn't good at all.

The story was weak, the plot unrealistic and the comedy was poorly timed. The only reason this movie sold at all was because it was riding solely on Eddie Murphy's fame and nothing more.

In other words, without Eddie as the star of this movie, it would have completely tanked.

From what I've learned concerning the background of this movie, nobody wanted it. Several known stars of the time turned it down, and the script was this haphazardly put together piece of garbage that wasn't even complete. In several scenes of the movie, Eddie had to literally improvise to fill in the gaps, and this is why the movie harshly goes back and forth from between "Eddie standup comedy" to actual story and then back again. A few other characters also had to improvise lines during principal shooting as well.

For example, the whole "Super Cops" scene (which is without a doubt the funniest scene in the movie) is almost all improvised.

During the police station scenes where the cars are being tracked, if you thought, "Wait a second... the LAPD didn't have GPS in 1984!", you were right. GPS-like tracking was only added in the story to speed up the already-weak story.

I re-watched this movie thinking it would be really funny as I remembered it.. but it wasn't. It was just.. blah.

There have been a few movies I've watched that were riding on nothing but star power, and it can be said without a doubt that they don't age well. Beverly Hills Cop is definitely one of them.

One good thing did come from the movie however, the song Axel F:

But even with that song being as cool as it was, it's nothing compared to how cool the theme to Miami Vice is:

To date, I've never watched a single episode of Miami Vice, but whenever the show came on I listened to the theme song intently, because it was (and still is) that good.