Here's my theory when it comes to certain things still for sale that are exactly like they used to be:

Certain products can stay stored in a warehouse for a long time and not age. If the product is still usable later in its original form, and we're talking years later mind you, it will still be sold as new.

Such a product is the Sony ICF-S10MK2. 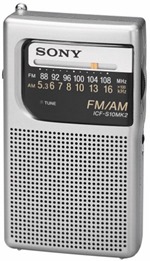 Yep, it's a pocket radio. But I swear I saw this thing for sale new back in the 1990s. Possibly even the late 1980s. However it's still for sale new now. I even think it's the same price it was originally.

Why is this thing still for sale and why would anyone want one?

The answer to that is interesting.

People who listen to pocket radios want something small to listen to while they're doing other stuff, such as listening while working on the car, doing the dishes, doing the laundry, etc.

FM radio these days completely sucks, and has for a while now. AM however has most of the better talk radio shows, which is what people listen to when they're sick of listening to music and just want something different. But since you can't get AM on the phone, that's where having a pocket radio actually has a real use, even today.

The Sony radio above has no digital in it whatsoever and no clock. If you think that sucks, it doesn't because the two AA batteries to power the radio can last a very, very long time. As in weeks, months or possibly a whole year before you have to pop in another two, assuming you don't turn up the volume too loudly.

You could - and this is no joke - leave the radio turned on with the volume at 25% and those two plain alkaline AA batteries would probably last a whole week straight if not longer. Since the radio is doing absolutely nothing but receiving a signal and sending audio to the speaker without lighting any display or having to "remember" the time for a clock, it barely uses any power to do what it does.

Now for all I know, there's some warehouse somewhere that has a few hundred of these radios in stock that were probably made 15 years ago if not longer. But it doesn't matter how old it is because the design of it is basically bulletproof. Worth it to buy one? If you want a simple AM/FM radio that will last a long time on batteries, yeah it is.

I would buy one myself were it not for the fact I already have a portable AM/FM/WX radio. Heck, I may buy it anyway because that little Sony looks like it came straight out of the late 80s. It's cool retro goodness for real cheap.