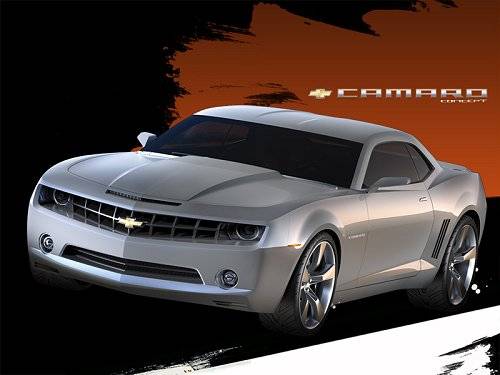 Above: Camaro concept car from Chevrolet. All I can say is that I'm glad the car is still in conceptual stages, meaning hopefully the car won't look completely like this. More on that in a moment.

I remember seeing several test mule Mustangs in Motor Trend before Ford released a full production version, both on paper and in real form. I think they got that one mostly right. The Mustang is a great looking and great performing car and yeah, if I had the money I'd probably buy one.

I also remember seeing the Dodge Viper in clay model stages (also from Motor Trend). That car is the only one I've ever seen where there was very little difference from clay to real production form - which in itself is shocking to begin with because that almost never happens.. but the car was an awesome ride even from the baby stages so there was no need to stray too far from the original concept.

As far as this Camaro goes, I dunno. The front air inlet I don't like. The side air vents I do like. The raised cowl on the hood I like. Side windows look way too small, causing the wheels to look way too huge. Rear tail lights for some reason look "angry" (but maybe that's the point..?) Combine that with the large rectangle for the rear license plate with the bowtie logo for a nose and it looks like an angry robot going EX-TER-MI-NATE - and that's not a good thing. 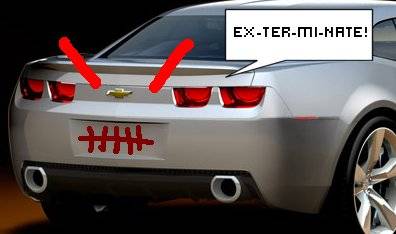 I can see an attempt at '69 Camaro styling here, but I'm praying that they re-work it a bit. Tail lights should be rectangular with rounded edges reminiscent of the '69, the exhaust tips need to be pointing down not out or blackened out, a different styled wheel needs to be used, the bowtie on the back needs to be moved to the bottom right (80's style), and the car needs an accent of some kind, either by thin chrome on the side or something like that. It also needs to say "Camaro" on the back somewhere. And those side mirrors have gotta go for something a tad larger. The Camaro logo on the side of the car needs to be moved down about five inches.

Am I being picky? Yes, I am. 🙂 I really don't care about the performance specs, the appearance of the car is the first thing people see. It's kind of like the same thing with the modern Dodge Charger. Great engines, great car, but ugly. Hopefully the Camaro won't suffer the same fate.