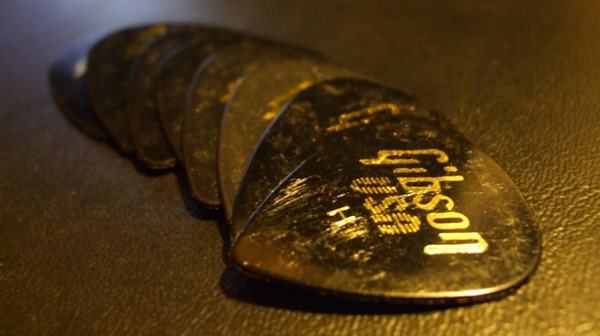 "Clacky pick" = the now-classic Fender 351 celluloid in heavy thickness ("351" refers to the shape), although it doesn't have to be made by Fender specifically as shown above. The picks in the photo by the way are older-style Gibson Standard "USA" picks from the 1990s that a friend sent me, found at a flea market which is why they're all scratched up.

A 351 heavy pick with no texture does literally clack against the strings when you play with one. For years I played nothing but Tortex .88mm picks (which are made of delrin and textured) and still do, but in 2012 and on into 2013 I started trying other picks. This started with Fender heavy celluloids, and then I tried medium Fender celluloids, and then recently the Gibson heavy picks.

Oddly enough, the Gibson Standard picks are the clackiest of the bunch as they are just ever-so slightly thicker than the Fender heavies and have slightly rounder edges. There is no way to tell the difference between a Fender and a Gibson heavy just by looking at them; you have to take each in your hand and bend the pick to feel the difference. And I have no idea if modern Gibson heavies are made the same way they were in the 90s. No clue. I'm assuming the construction is the same.

Are there times when clack is better?

Basically, you use 351 celluloids whenever more audible pick clack is needed electrically or acoustically.

On the electric side, the clack is good for blues to rockabilly to metal and everything in between.

On the acoustic side, I'm not referring to acoustic guitars but rather the acoustic sound of your electric. For example, when at home or in the studio doing the recording thing, hearing more pick clack is good so you can hear the notes you're picking in two ways instead of just one. Pick clack can be loud enough to be heard outside of headphones or ear buds as long as the headset you're wearing isn't blaring with volume.

With the Gibson Standard picks, I've personally found they work really well for hybrid picking (fingers + pick) because I like having that extra clack in there.